Sunbed addict, 41, who tanned as many as FOUR times a week reveals how she lost her breast to aggressive skin cancer and is ‘scared to look at her body’

A mum-of-two who was ‘addicted’ to sunbeds as a teenager has warned against their use after her harrowing cancer ordeal.

Adele Hughes, 41, would visit sunbed shops up to four times a week – but in December 2019 she was diagnosed with two types of aggressive melanomas – skin cancer – during a routine skin check.

Her condition was so serious that she eventually had surgery to remove part of her breast and a large chunk from her back.

Originally from Huyton, Merseyside, Adele moved to Hong Kong nearly 13 years ago, where she lives with her daughters Sienna and Elise.

Since her diagnosis, Adele has chosen to share her story in the hope of warning other young people about the importance of keeping safe in the sun.

May 2021 is Skin Cancer Awareness Month, and Adele is continuing with her campaign to raise awareness of skin cancer and sun safety saw in her new role as an ambassador for the charity Melanoma UK. 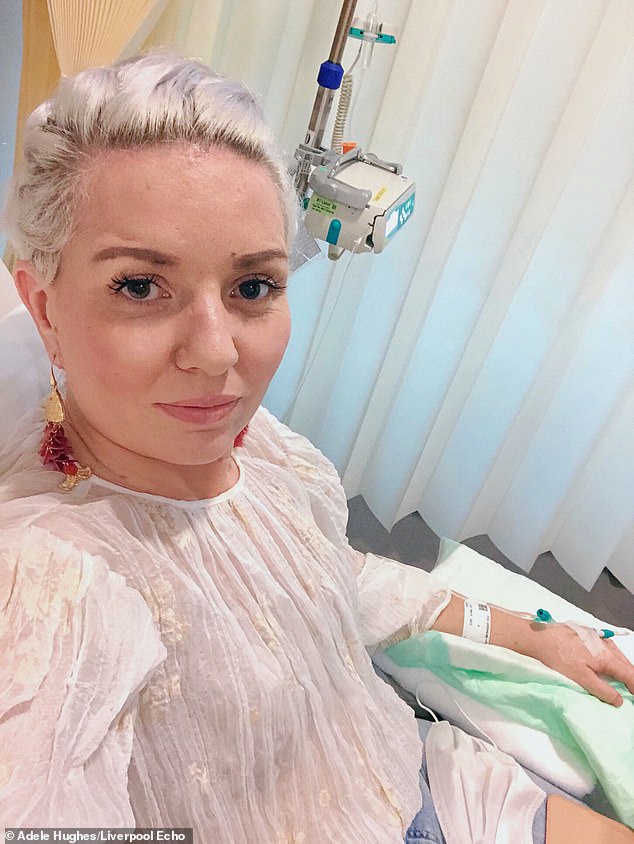 Adele Hughes, 41, from Huyton, Merseyside, was diagnosed with nodular melanoma in her breast and malignant melanoma in her back in 2019, after using tanning beds and enjoying sunbathing for year (pictured in hospital in 2020) 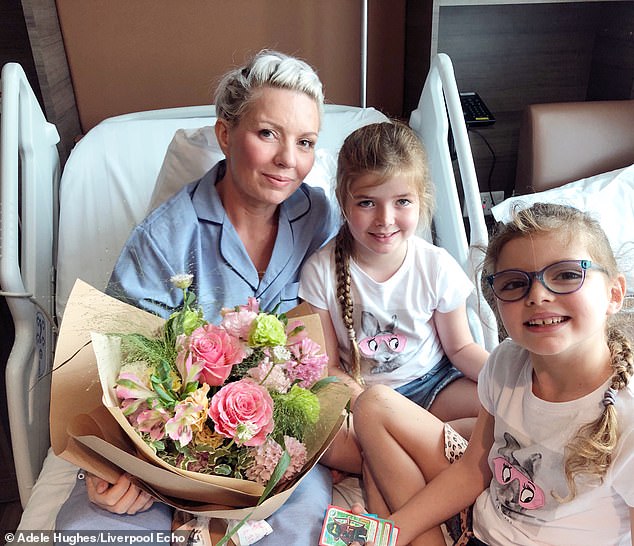 The mother-of-two, who just completed her treatment after several gruelling operations, said she’ll have to be monitored regularly to make sure the illness doesn’t resurface (pictured with her daughters Sienna and Elise in Hong Kong, while receiving treatment)

Adele said: ‘I was brought up in Liverpool and from the age of 16 I used to use the sunbeds. I used them for about two years and I would be on them three or four times a week.

‘I think I was about 17 when I had my first mole removed but I thought I was fine and it didn’t stop me.

‘I would go on the sunbeds, I would sunbathe until I was red. I haven’t got that type of skin to tan so I would just burn.

‘I turned 40 in January [2020] and in December 2019 I had a regular skin check and I went along to my dermatologist and he saw suspicious looking moles on my nipple and on my back. 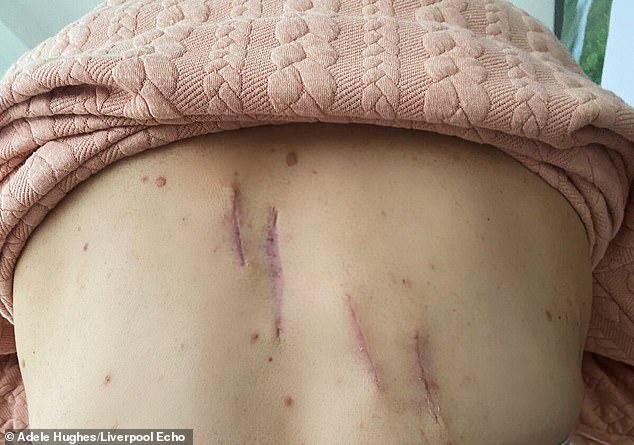 Big chunks of Adele’s back had to be removed as part of her treatment against the fast-spreading form of skin cancer, pictured

Nodular melanoma is the most aggressive form of melanoma because it grows and spreads quickly and can often go unnoticed.

The dermatologist removed Adele’s moles and initially diagnosed her as having stage one melanoma.

But she had to undergo surgery to remove part of her breast and also cut out a large chunk from her back.

Further tests revealed the cancer had spread to Adele’s lymph nodes and she was diagnosed with stage three melanoma. 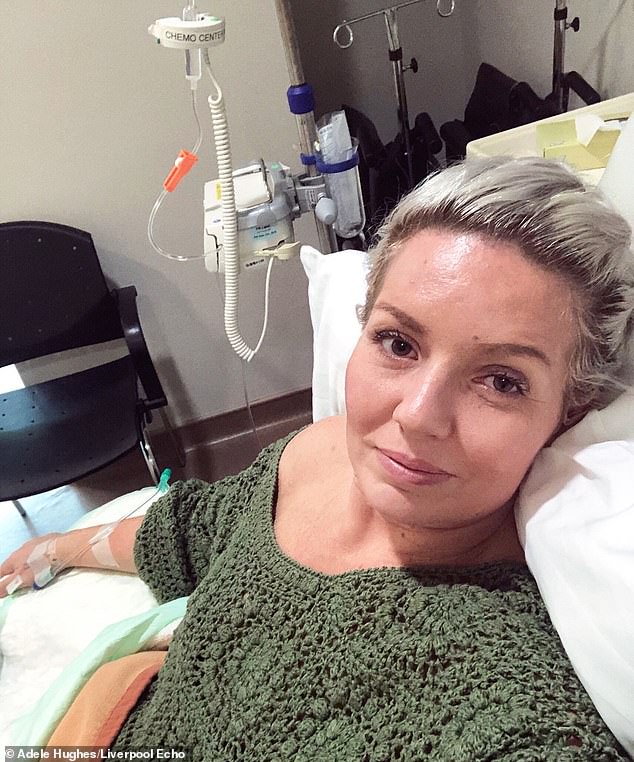 Adele said she started using tan beds in Liverpool aged 16 and never considered the effects it could have on her skin, pictured in hospital 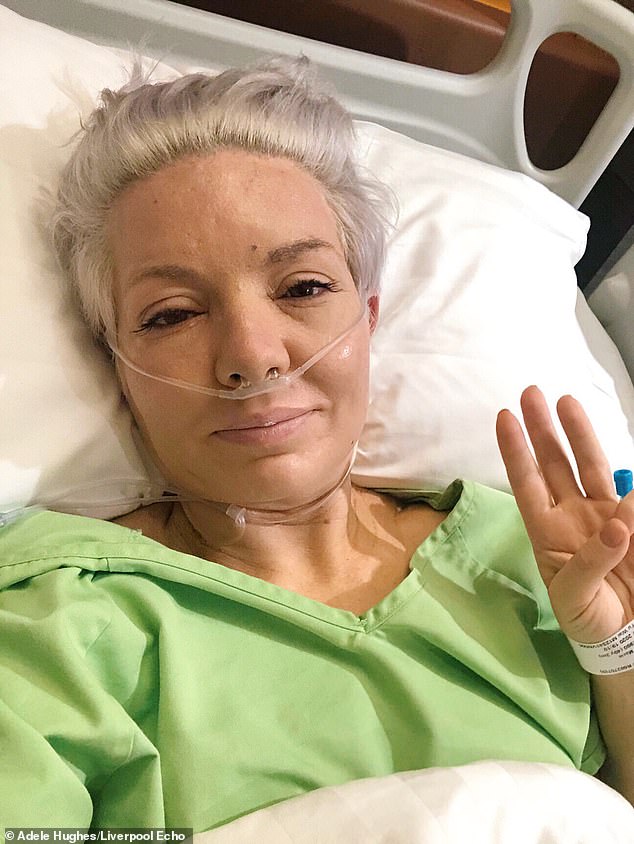 The mother-of-two, pictured in hospital, said she was scared of looking at her own body after parts of her breasts were removed during her treatment, and her bully button was reconstructed

Adele said: ‘I’d just gone in for a routine check, I hadn’t noticed anything suspicious because one of the moles was on my back so I couldn’t see it for myself. Thank god I had that check up.’

Having to undergo these surgeries was a gruelling ordeal for Adele, who admitted she was ‘scared’ to look at her own breasts after the procedures.

Shortly after overcoming these first surgeries, Adele noticed another mole growing in her belly button, which hadn’t been present at her routine check up in December 2019.

Adele said: ‘In the space of a few weeks it had appeared and grown really big. [The dermatologist] took it off and I was told it was malignant melanoma.

‘They had to take away my belly button and reconstruct it. I felt like my whole body was being cut into chunks – all for the sake of a tan.’

Further cancerous cells were also found in Adele’s left groin which had to be removed in another surgery last year. 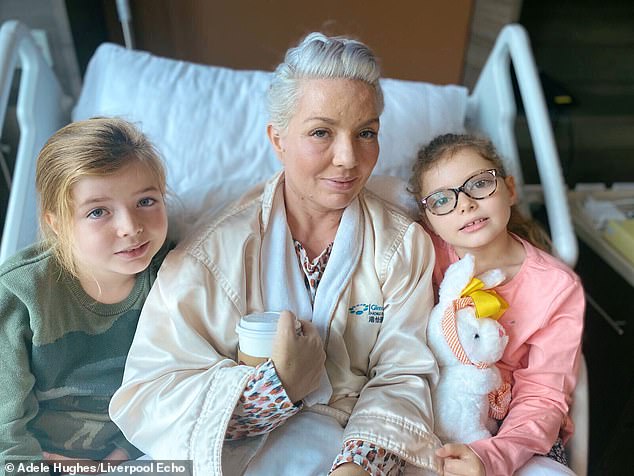 Adele, pictured with Sienna and Elise, said she looked at her daughters and wondered what would have happened if she had been diagnosed later than she was 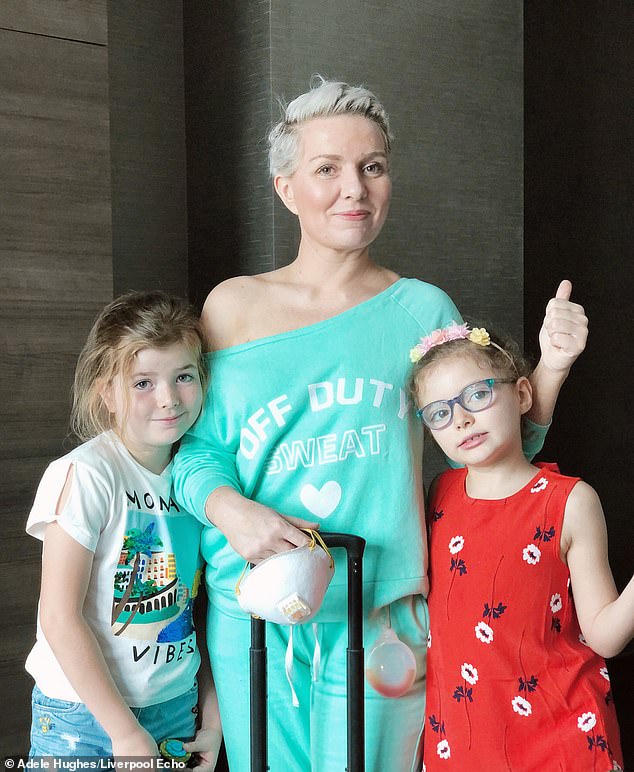 the mother-of-two has finished her treatment and shows no signs of disease, however, the cancer went into her lymph nodes, which means they cancer could lay dormant and will need to be monitored regularly (pictured going out of hospital with her daughters)

Living so far away from her mum and dad, who still live in Huyton, means Adele has had to battle through her treatment without her family being there to support her in person.

And travel restrictions brought about as a result of the coronavirus pandemic have made any family visits impossible for Adele, who finished her treatment in March this year.

Despite being 6,000 miles away, Adele’s mum would wake up at 5am on her treatment days to support her and accompany her via FaceTime.

Adele has also been using her blog ‘The Melanoma in Me’ as a way of expressing herself and trying to reach out to others.

Her powerful posts, pictures and poems are her way of processing everything she’s going through.

Many of her posts include family photos of her enjoying life with her two daughters.

Adele said: ‘Because I’m a mum and my priority is them, all I can think about is “What if?”. I know I shouldn’t but it’s in the back of my mind.’

Now that Adele’s treatment is complete – with no evidence of disease left – she is having checks every three months to monitor her progress.

Speaking last year, Adele said: ‘Because I’m stage three and it’s gone into my lymph nodes it’s never going to be a case of being in remission, it could always be hiding and we need to constantly watch and monitor.’

MELANOMA IS THE MOST DANGEROUS FORM OF SKIN CANCER

Melanoma is the most dangerous form of skin cancer. It happens after the DNA in skin cells is damaged (typically due to harmful UV rays) and then not repaired so it triggers mutations that can form malignant tumors.

Around 15,900 new cases occur every year in the UK, with 2,285 Britons dying from the disease in 2016, according to Cancer Research UK statistics.

The patient can decide to use a skin graft if the surgery has left behind discoloration or an indent.

This is needed if the cancer reaches stage III or IV. That means that the cancerous cells have spread to the lymph nodes or other organs in the body.

Adele wants to warn others of the danger of using sunbeds and also of exposing themselves to the sun without the adequate protection.

Adele said: ‘Because I’ve got red hair naturally and fair skin, the fact I was on sunbeds at an early age will have contributed.

‘In my 20s I would sunbathe and even in recent years when we would go on holiday around Asia.

‘I see people on social media showing off their tan lines now and I just think: “If only you could see what this has done to me’.

‘I would just like people to look after their skin, be sun safe ad when they go into the sun, wear factor 50, wear things that cover your skin.

‘Stay out of the sun between 12pm and 4pm when it’s strongest and be aware of what it can do to you.’