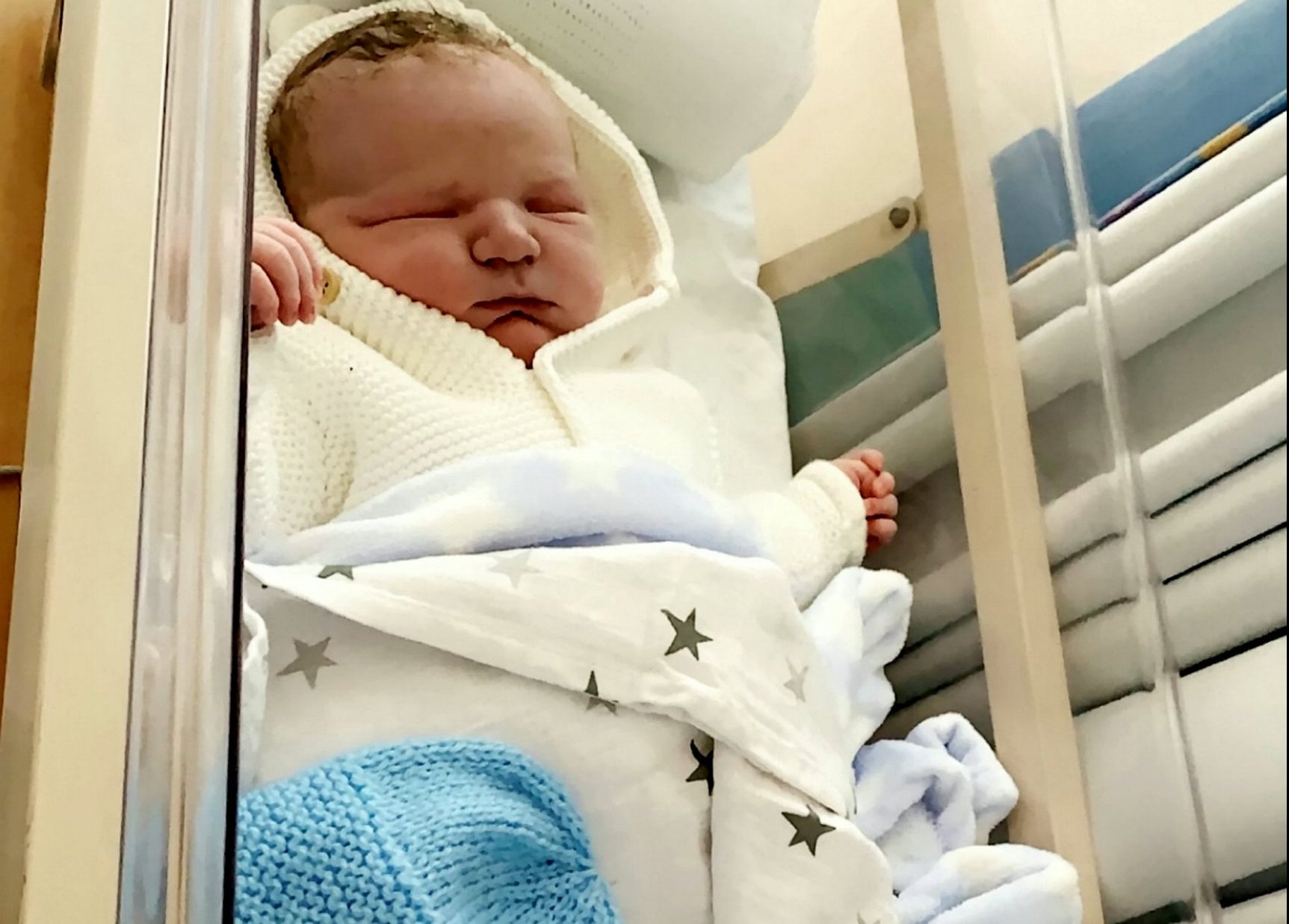 A mum who gave birth to one of the biggest babies of the last twenty years has shared how she thought she might be having twins due to the size of her bump.

Ronny-Jay Fewtrell arrived into the world weighing 11lbs 5oz – the same as a bowling ball or a small dog – after he was delivered at Worcestershire Royal Hospital.

Stunned midwifes revealed the super-size tot was the largest they’d ever had on their scales and had to double check his weight.

Mum Jade Bayer, 33, said her son was so chunky he couldn’t fit into newborn baby clothes and went straight into items for three-to-six-month-olds.

The mother-of-four naturally gave birth to Ronny-Jay at 5.49am on April 5, almost opting for a C-section during the lengthy 16 hour labour.

The average baby born weighs around 7.5lbs, which puts Ronny among some of the biggest newborns in the UK.

Incredibly, Jade said her baby bump was bigger with her latest arrival than when she gave birth to twins.

Jade said: ‘We had an inkling at the very beginning Ronny was going to be big. I was big straight away, there was no hiding my pregnancy from the beginning.

‘A lot of people were joking it was twins again because I carried bigger with Ronny than with the twins.

‘When he was born we had to ask to double check the weight because it was 5,000 grams and we didn’t know how much that was.

‘By the time they’d converted it even the midwives were shocked and checked it again on the chart they had.

‘One of them said he is the biggest baby that has been on the scales. The midwives were laughing saying his umbilical cord was like a tow rope.

‘He went completely off the growth charts where they put the estimated weight and length – I think he was about the size of a four month old baby.’

And she’s already had to give up breastfeeding him, due to being unable to keep up with the demands of her thirsty jumbo tot, who is now aged 12 weeks.

The family had to switch him to hungry baby formula, after the midwives noticed he was feeding far more than could be provided by breastfeeding.

Jade, who lives with partner Scott Fewtrell, 29, a labourer, said Ronny would probably be their final child.

Full-time mum Jade added: ‘By the looks of it, they keep getting bigger and four is enough for anyone.

‘I’ve done my fair share for the population and if they get any bigger then you are looking at a stone baby.’

Aside from his need for feeds, Ronny is a happy and healthy baby, whose mum said is ‘so chilled out’.

Jade continued: ‘I was quite shocked to learn he could be one of Britain’s biggest babies but the midwife did say he was the biggest ever on her scales.

‘He’s absolutely fine now and gets on great with his siblings, they dote on him.

‘I can’t thank the midwives enough for their continued support and work with me and the baby through my traumatic labour.’

Get in touch at [email protected]