Pandemic lockdowns have silenced that sentimental if occasionally off-key tradition of fete days and school assemblies – the school band.

Musicians and educators responsible for coaching the nation’s upcoming generation of musicians are concerned about the loss of two years of beginners for whom the school training band is a first formal introduction to music. 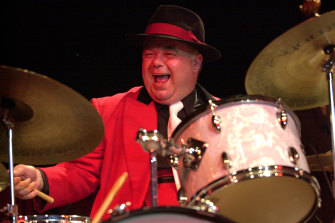 “These students start playing in year 4, and they go right through to the end. If they don’t take up band in year 4 or 5, they won’t join the band program in high school because they won’t have that early training.”

The school band is the first stop on a trajectory that takes the most talented newcomers from youth orchestras to formal study and a professional career.

But multiple lockdowns in Melbourne and Sydney have disrupted and shuttered school concerts and band performances since March 2020.

Even as schools return to face-to-face teaching Term 4, they will do so with significant restrictions.

James Pensini, head of orchestral training and senior conductor of Sydney Youth Orchestras, is currently recruiting 550 positions for its 14 orchestras.

The 750 quality auditions are fewer than the usual number SYO would expect to receive in a non-COVID year.

Pensini believes the reduced applications partly reflect subdued public confidence and music being “out of sight, out of mind” for families in a year of intense distractions.

“Statistically, if you haven’t started learning an instrument by the time you are 11 years old, you are unlikely to start,” he says. “This will be where we at Sydney Youth Orchestra are likely to see an impact not just now but in the years to come when there are less students who started an instrument over this year and last. 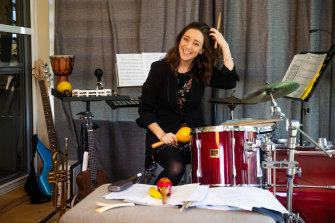 “Keeping students going who know the wonderful buzz and energy of playing music together has so far sustained us, though connecting with students who have never had this opportunity will be difficult for everyone going forward.”

Music education in NSW schools was already in a state of distress before COVID-19 struck, Pensini says.

He points to a 2019 report by the Tony Foundation that found music education in Australia is inequitable, highly variable and undervalued.

This is despite several national reviews and a compelling body of evidence showing the significant positive cognitive and developmental impacts of a high-quality music education. 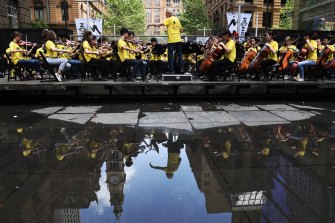 Students who engage in music learning perform better academically, contribute to their communities, form positive relationships and continue their education into university.

All states apart from the NSW Department of Education offer some kind of government-funded instrumental curriculum, Pensini says.

NSW public schools rely on tutors and music directors contracted casually, usually through parents and citizens bodies, to deliver external music programs before and after school.

Morrison says: “So many of these people have been left to hang out to dry. We’ve got some of them teaching online, but we’ve had lots of schools just drop band altogether.”

To reboot school music and arts programs, the Berejiklian government announced grants of up to $10,000 per school to cover equipment, teacher release, expert tuition for students, or professional learning for teachers.

Last year Morrison, a jazz drummer and brother of trumpeter James Morrison, directed “months and months of bucket drumming” before clearance was given for members of his school band to return to their instruments.

“That was very challenging for many music teachers,” he says. “They’ve had to re-skill, and now we’re seeing a lot of music directors leave the game, and that’s going to be the biggest problem. We are going to lose this incredible knowledge base that we had.”

This is likely to compound a looming “skills cliff” identified by the Tony report. It predicts a decline in the availability of competent and confident music educators within schools in the next decade as a result of changes to university teacher training.

The Australian School Band and Orchestra Festival was three weeks out from opening when Sydney’s lockdown was called this July. Two hundred and forty ensembles were enrolled for 2021, down from 350 the previous year.

The festival caters for school-aged concert, brass, and big bands, string ensembles and orchestras of all ability levels.

Festival general manager Pat Devery says: “We’re not just losing the musicians of the future but the audiences of the future. We have around 150 music directors who are going broke due to no work in schools and community ensembles. While there has been some recent attention on the impact of COVID-19 on the popular music scene, the extent of the damage to school instrumental programs is yet to be fully realised.”

The crisis is being acutely felt by the music education providers and not-for-profits, such as Musica Viva, Musical Futures and The Song Room, that bridge the music skills gap in schools.

The Song Room delivers curriculum-aligned music and arts programs to about 13,000 of Australia’s most disadvantaged school children every year.

Chief executive Alice Gerlach says her organisation is providing generalist teachers the resources to build music into their online programs.

“Our focus is on what children can do in the home, be it singing, body percussion, or using household objects as instruments, but there are schools where worksheets are the only means of delivering learning,” she says.

To some extent, the online format has been a bridge for her students and musicians, Lipworth says.

But learning, teaching, and creating instrumental music is all about feedback, and interaction and that’s been difficult to achieve.

Professional burn-out is palpable, she says, as music directors redesign activities, figure out new technology – or not – and maintain band membership.

Lipworth says her weightiest responsibility as a band director will be recruiting next year’s beginners. The return to band was shaky at best after 2020 lockdowns.

“While the dip in musical standard was expected and accepted with patience and forgiveness by all, it was no less upsetting, and some weren’t willing to continue after the setback,” she says.

Lipworth’s hours and pay fell to keep bands viable. In beginner bands, membership fell by up to 30 per cent.

“Not only are these unfortunate beginners denied the best possible set-up, they’re stuck at home going it alone,” she says.

This time around, Lipworth says this “on-and-off affair with our great love of playing music is starting to wear thin”.

“We are clutching at straws to keep innovating online, to maintain motivation, inspiration, and incentives for players and band leaders alike,” she says.

“The uncertain promise of a triumphant return to that sublime experience of playing and performing live is becoming increasingly abstract, especially for many young musicians who may never have known even a glimmer of that privilege before they were separated from their conductors and bandmates.

“Beyond this heartbreak for the music-makers, my heart bleeds for audiences, and a society who are missing receiving this nourishment from us.

“Why work so hard to survive if not to live surrounded by and sharing the best and most beautiful parts of our human experience – art and music. More than ever our students are wondering, ‘What’s the point?’.”