My golden weeks as Picasso's girl with the ponytail

My golden weeks as Picasso’s girl with the ponytail: Today she’s an artist who lives quietly in Devon. But for one glorious summer when she was 19, Lydia became a muse who captivated the mercurial painter

Pablo Picasso was many things — an artistic genius, one of the most important, talented and prolific painters of the 20th century and, according to reviewers of the latest exhibition of his work, Picasso And Paper, at the Royal Academy, ‘corruscatingly brilliant’.

But he was also a violent bully who changed his sexual partners as often as his painting style, beat up lovers, drove two of them to suicide and declared that women ‘were machines made for suffering’.

Even his own granddaughter described him as a misogynist who ‘submitted women to his animal sexuality, tamed them, ingested them and crushed them onto his canvas’.

But 85-year-old Lydia Corbett will not hear a single word against him. 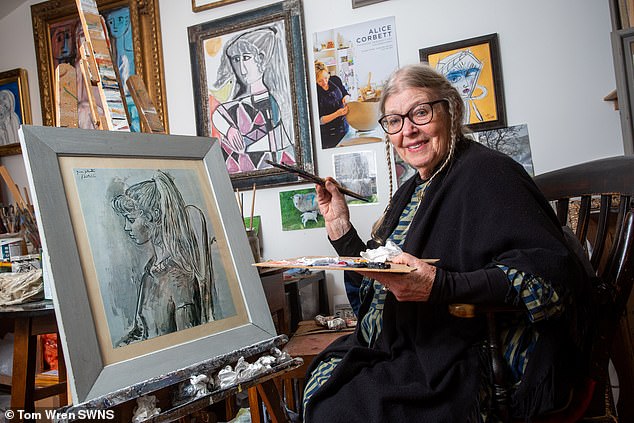 Lydia Corbett, 85, (pictured) who lives in Devon, reflected on posing for Pablo Picasso’s paintings in the summer of 1954

‘I am the only one who says good things about him,’ she says. ‘He was always gentle with me — he put me at ease, like a proper father figure.’

Theirs was an unusual pairing that spanned just a few sun-drenched weeks in the pottery town of Vallauris on the Cote d’Azur back in 1954.

‘He was so kind and funny and did everything to give me my confidence back,’ she says. ‘He gave me so much. I will always love him.’

Today, she lives in a cosy house in Devon awash with paintings, sculptures and pottery.

Back then, she was Sylvette David — aka, Picasso’s Girl With The Ponytail, the study of more than 60 portraits — a 19-year-old blonde bombshell engaged to a furniture designer called Toby Jellinek.

With her high ponytail and slender, freckled neck, she was ethereally beautiful, but also cripplingly shy, naive and emotionally damaged.

‘I was shut in, very shut in — young, innocent and full of fear,’ she says in her accented English. ‘I had been given too much freedom as a child and abused by my mother’s husband — it shook me for life. I think he could feel that I was broken.’

Picasso, meanwhile, was 73 and mired in his own crisis. 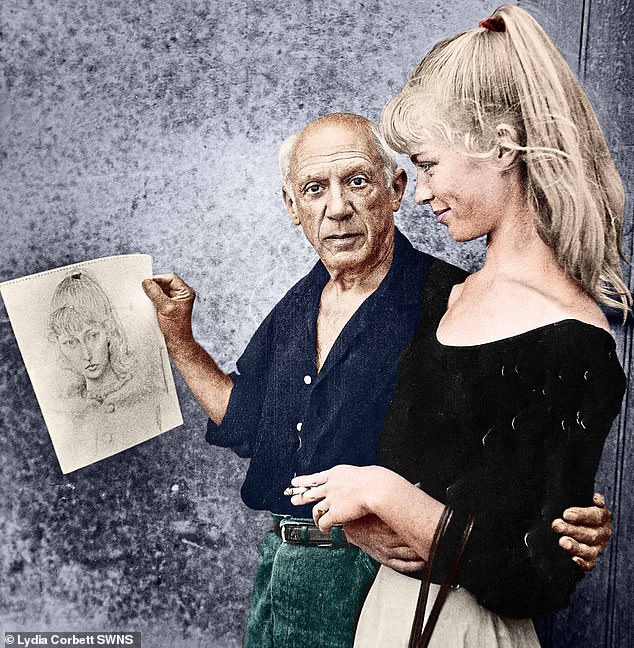 Lydia who was then known as Sylvette David, 19, was spotted by the 73-year-old painter while chatting in the sun with friends. Pictured: Lydia with Picaso in 1954

He had been dumped by his long-term partner Francoise Gilot, whom he’d been dating since he was 61 and she 21 and who had likened him to Bluebeard, the folktale serial killer.

She was the first of all his women to leave him and he was bruised, vulnerable and felt close to death.

Then, in April, he spotted the beautiful Sylvette chatting in the sun with friends, felt invigorated by her youth and knew he had to paint her.

So he sketched a large charcoal likeness and dangled it over a wall behind which she was chatting.

Frankly, it’s hard to believe anyone not noticing her — particularly not a painter with a penchant for much younger partners. But she insists her self-confidence was at rock bottom.

‘I had bad legs and thick ankles!’ she says. ‘I was always covered in long skirts and long sleeves.’ 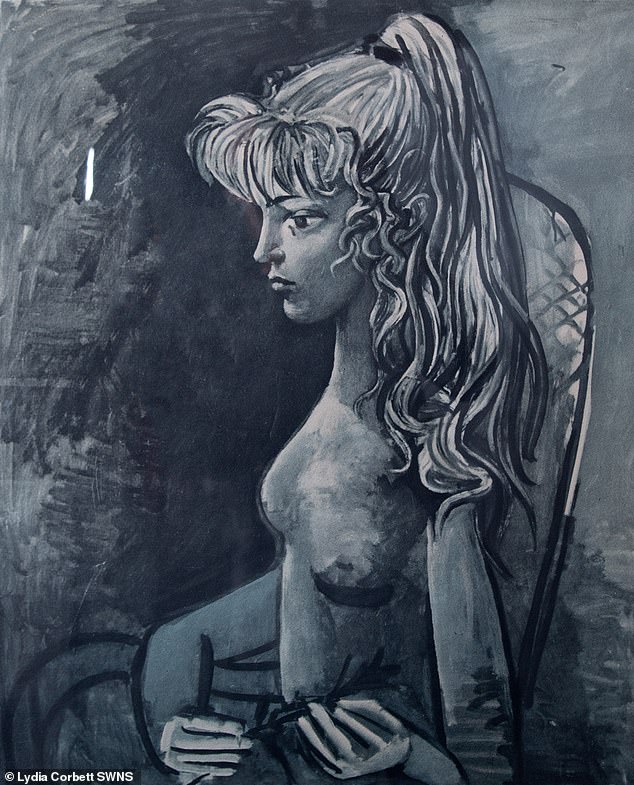 Lydia claims that she never saw Picasso drunk and unlike most old men, he didn’t smell of garlic or wine. Pictured: ‘Grey period’: a nude from picasso’s The Girl With The ponytail series

Over the following weeks, Sylvette sat for six hours a day as he created a series of portraits in various media — drawings, sculptures and paintings — and the result, known as his ‘grey period’ because most of the works were in greys, blacks and whites, was the most intense series of portraits he ever did with one model.

It wasn’t easy for her.

But despite his bullying reputation, she insists Picasso was different. ‘He was young-looking and brown and clean as a fiddle. He didn’t smell of garlic or wine like most old men — I never saw him drinking, or drunk. He smelled of roses.’

Each day, she’d sit for hours in the studio, gazing out of the window as Picasso painted in utter silence.

When he was creating, he was prolific and focused. He’d work quietly and steadily — confident, never tutting or swearing — at the end of each day showing her the finished work and the next, starting a new piece.

‘He used to say that when he went into the studio he left his body outside,’ she says. 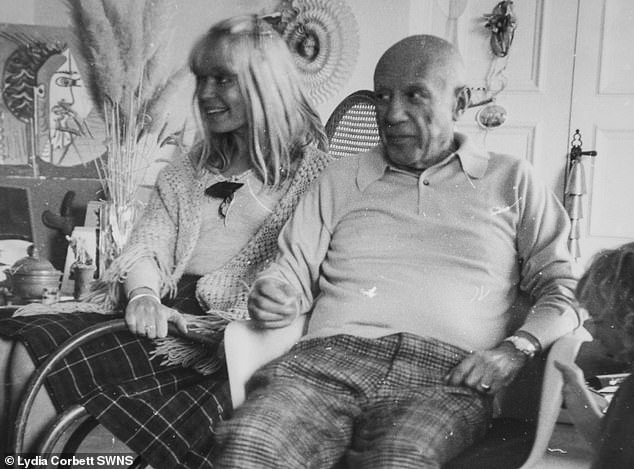 Lydia said that sex never crossed her mind and she wouldn’t take any money in case Picasso wanted her to pose nude for him. Pictured: Lydia with Picasso in 1965

She meanwhile, would empty her mind. ‘I didn’t think much. I was really quite simple. I’d just sit.’

She loved the peace among the mess of frames, metal, stones and bits of old timber. When he wasn’t painting, Picasso was extraordinarily energetic. He’d dress up and put on funny glasses, don a moustache or a cowboy hat and prance about. He’d paint spiders so lifelike on the studio floor, he would scare himself silly.

‘He was always trying to make me laugh,’ she says. Very occasionally, he succeeded. But she insists their relationship was never more than that.

‘No, no, no,’ she says with a stern look. ‘It was never that. I was hopeless at the sex. Sex never crossed my mind and I never talked about it. I wouldn’t take any money in case he wanted me to pose nude for him.’

Though the old goat did once paint her from his imagination.

‘I think maybe he was hoping I’d say: ‘Oh alright then.’ But I was such a prude. I’d been brought up on a nudist colony but I’d never been comfortable taking my clothes off.’ 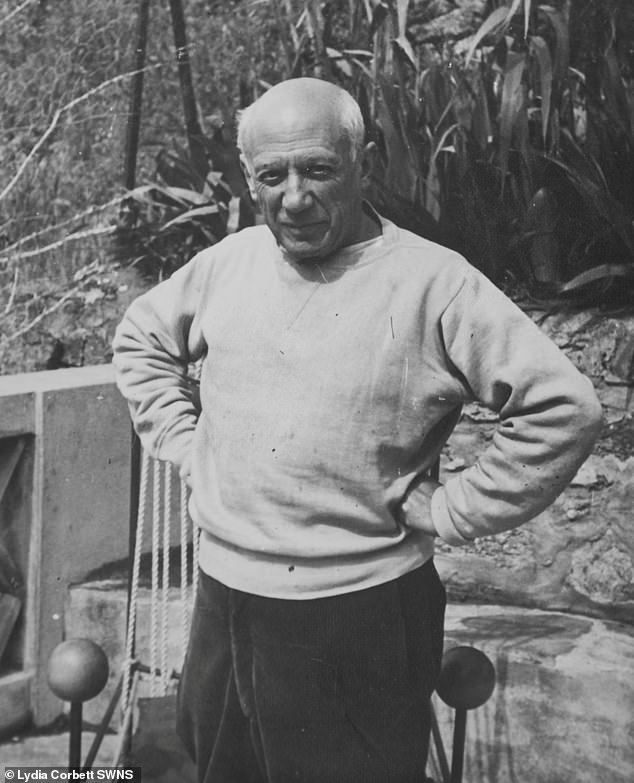 Lydia claims that as a 19-year-old Picasso seemed like a granddad or father figure. Pictured: Picasso not long after meeting Sylvette

There was one moment when things could have turned. When he took her by the hand and led her up the stairs to a tiny bedroom with a chair and a bed, on which he started leaping about and beckoning to her.

‘I thought: ‘Well I’m not going to jump on the bed, too!’ If you’re 19 and he’s 73, he’s like a granddad — or at the very least a father figure.’ Albeit not, perhaps, in his head. (Of his lovers, many had been young and vulnerable. He cheated on his partners, beat at least one unconscious and once said: ‘There are only two kinds of women — goddesses and doormats.’)

These calm weeks were not to last. In June, he met Jacqueline Roque, 26, and she became his new inspiration and second wife.

But not before news of Picasso’s beautiful blonde muse had leaked out to the world, and she became briefly famous in her own right.

The Sylvette series was exhibited in Paris to critical acclaim with Time magazine announcing a new epoch in Picasso’s creativity — his ‘ponytail period’. 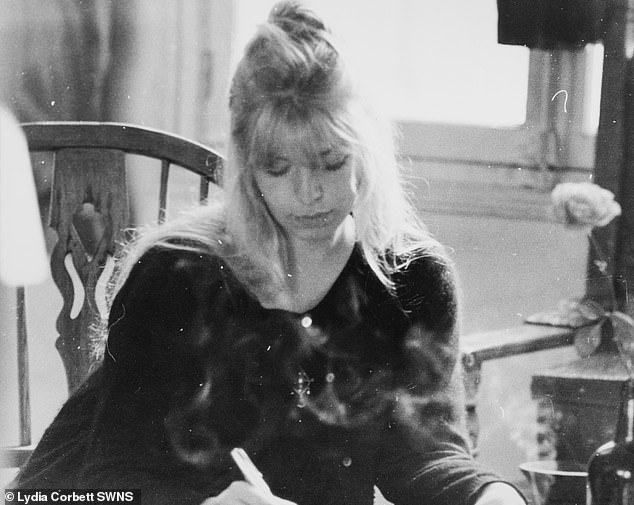 Lydia gave Picasso a handmade clay sculpture of a woman, without making a dramatic farewell. Pictured: Lydia, formerly know as Sylvette David in the 1950s

Brigitte Bardot copied the ponytail and soon everyone was doing ‘a Sylvette’. Journalists and fashion writers turned up from all over.

‘I used to hide in the cupboard at home when they came, and shout: ‘Send them away, mummy!’ ‘

There were also love letters from all over the world — ‘most of them were asking me to marry them.’

There was no big, dramatic farewell with Picasso. ‘I thanked him for giving me so much — he gave me immortality, confidence, memories and love.’

She gave him a rather lovely handmade clay sculpture of a woman, which is still in the family archive, and he gave her the pick of his paintings of her, and she chose a beautiful, lifelike study.

And that was that. He moved to Cannes with Jacqueline and Sylvette to England with Toby.

Three years later, when Toby was in hospital, she sold the painting for £11,000 to an American. ‘He was very nice and said he’d maybe leave it to me when he died,’ she says. ‘But he went senile.’ Still, she has no regrets. 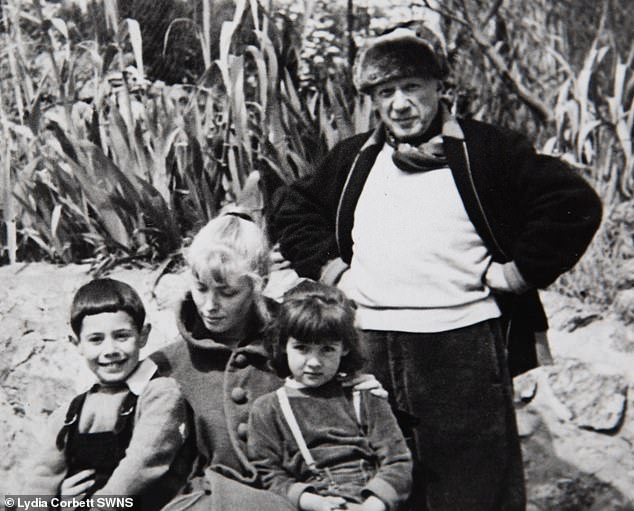 Lydia who changed her name after finding solace in God, last saw Picaso in 1965. Pictured: Lydia with Picasso and his sons

Sadly, things didn’t last with Toby. When she was 27, he fell in love with her best friend. Her heart broken, she found solace in God and changed her name to Lydia.

She didn’t see him again, though she thought of him often. When he died, aged 91, in 1973, and more and more stories emerged about his bullying, his drinking, his horrible behaviour towards women — people started looking for Sylvette to tell her story.

But she was now Lydia, a mother of two, living in Devon. A second husband, Rawdon Corbett, cheated on her, but she pulled herself up and, aged 45, took up painting.

Now she has exhibited at the Tate and has two more coming up over the next few months. 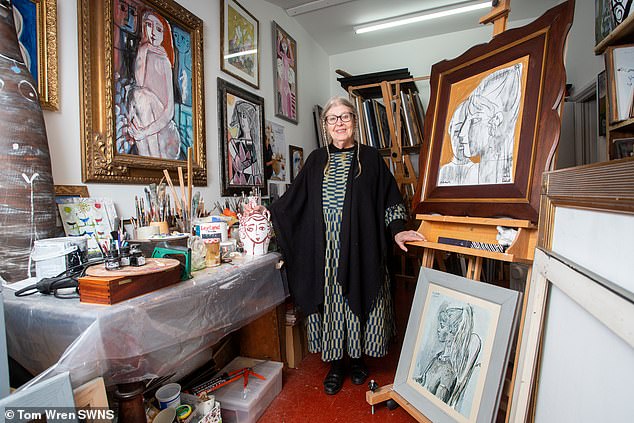 ‘We touched each other’s lives in a lovely way,’ she says. There was no doubt he was touched by her.

When later Bardot — by then a huge star — begged him to paint her, Picasso retorted sharply: ‘No. I’ve done Sylvette now!’

But what does she think of the others — the women who were beaten and cheated on?

‘I don’t know. I don’t understand it,’ she says. ‘I remember Francoise was a bit upset — she didn’t come and say hello. Jacqueline was very nice to me — she wasn’t even jealous. But of course she started drinking and killed herself . . .’

Despite producing at least 60 works during that heady summer, Picasso’s grey period has been all but wiped from his biographies. ‘I don’t know why people don’t talk about my period,’ she says. ‘Maybe they don’t think it’s interesting because there was no sex.’

Or perhaps that is exactly what makes it so very poignant.