A permanent increase in funding for the National Archives must be delivered or its collection will once again “fall of a cliff”, the institution’s retiring director-general has warned while arguing its burgeoning collection acts as a bulwark against official corruption.

David Fricker, who has overseen the archives for the past decade, said despite an injection of desperately needed cash by the federal government in recent months, the archives would soon face another funding crunch that would put at risk the “national memory”. 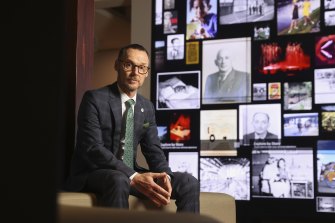 The outgoing director of the National Archives of Australia, David Fricker, has pleaded for the archives to be sustainably funded.Credit:Alex Ellinghausen

Mr Fricker also warned ministers and officials “on the public coin” had to be held to account as he argued information passed through private messaging systems such as WhatsApp needed to be properly brought into the nation’s historical collection.

Last month’s mid-year budget update confirmed $67.7 million in additional funding for the archives that will go towards saving almost 300,000 individual documents and collections at risk of disintegration.

They include radio recordings of former prime minister John Curtin and a petition to King George V for Indigenous representation in Federal Parliament.

The money followed a series of reports by The Sydney Morning Herald and The Age into the dire situation facing the archives after years of funding and staffing cuts.

A review of the archives, however, has argued longer-term investment worth up to $167 million is needed for the institution to protect and upgrade its archival and preservation systems.

Mr Fricker, whose tenure ended with the start of the new year, said the funding boost confirmed in the budget update would be vital in helping the archives to protect thousands of documents about to turn to dust. But, he said, it was not enough.

“Once that funding lapses, absolutely the place will fall off a cliff again, and the national memory will be once again imperiled if we don’t have a long-term sustainable funding solution to archives,” he told The Sydney Morning Herald and The Age.

Mr Fricker said the continuous creation of documents by all arms of government meant the archives would have to expand its collection while also spending more on it to preserve it for the future.

He said the archives was particularly important because it held original documents.

“You don’t want people in future generations subtly rewriting the speech to sort of reflect a different sort of truth,” he said.

“What is especially at risk for Australia is the material that has not seen the public light of day yet but should. It’s sitting in a box somewhere. It might be aspects of the Australia’s military operations, there might be aspects of what the intelligence agencies have been doing that won’t see the light of day until, you know, 20 years from now.”

The archives usually touches the public consciousness on January 1 each year when it releases previously secret cabinet documents under the 20-year rule.

But documents have changed in form over the past two decades. Ministerial decisions and discussions are increasingly being held through encrypted means. Officially, these should be collated by the archives but so far almost none have been deposited with the institution by former ministers.

“Australians need to know that, and that information can be kept closed and kept private for 20 years, but at some point in the future, you should be held to account and so we do need to keep that material,” Mr Fricker said.

“I think that keeps the present generation of public servants and ministerial staffers in line as well because in the back of your mind you know that you can’t escape leaving a trace of what you’ve done. One day, it will come to light and I think that that’s got to act as a break on things like corruption.”

Apart from the cabinet papers and its funding challenges, the archives under Mr Fricker were also central to the “Palace letters” furore.

Mr Fricker, who came under fire for his handling of the issue, said he had no regrets about how he managed the matter which ultimately cost the archives more than $1 million in legal fees.

He said the archives had acted according to the law, with the argument over the release of the letters turning on the definition of the word property.

Mr Fricker said the role of the archives in preserving Australian history had been reinforced by the whole issue.

“I’m not here to protect history. I’m here to say look at the primary sources, look at the actual evidence,” he said.

Former prime minister John Howard paid tribute to the work of Mr Fricker and said the archives was vital to preserving the “treasure” of Australian history.

He said the archives played a role in explaining key developments in the nation’s past, noting how Australia was home to the secret ballot and was one of the first nations to extend the voting franchise to women.

“I’m so glad that the government, I’m sure with the support of the opposition because it ought to be a bipartisan endeavour, some additional funding was made available to the archives,” he said.