Just magical: From spellbinding choreography to enchanting sets and splendid singing, Orfeo at Garsington Opera is a special evening indeed

Monteverdi’s Orfeo (1607) is perhaps the first-ever opera. It has a lot to answer for, hasn’t it? Certainly it’s the earliest opera to be regularly performed.

But in 400 years it can have received few more beguiling performances than this one, where the human and the natural world combined to often magical effect.

Garsington’s award-winning, chalet-style opera house has rarely been better used than director John Caird and his team manage here, working it wonderfully well into the performance. 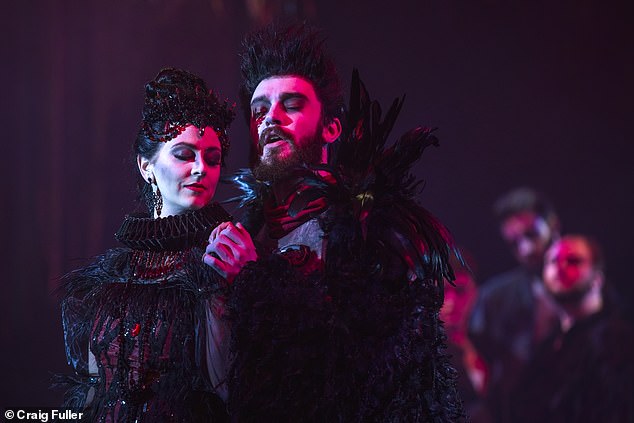 Garsington’s award-winning, chalet-style opera house has rarely been better used than here. Above: Lauren Joyanne Morris as Proserpina and Ossian Huskinson as Pluto

The early summer sunshine provided a glorious backdrop to an opera that takes us from heaven to hell.

And even hell got a look-in outside, as the ravages of ash dieback become increasingly obvious on the beautiful woodlands that partially surround the late Sir Paul Getty’s delightful cricket ground.

Robert Jones’s designs allow all the action, and the music, to take place around an enchanted lake that could easily be real.

The musicians, actors, singers and dancers are beautifully integrated in Arielle Smith’s sophisticated choreography, while Paul Pyant’s lighting allows the journey to hell to be accomplished without spoiling the bucolic magic of the overall scene.

I’d love to mention all the singers, but space doesn’t allow. Suffice it, then, to commend Zoe Drummond’s lovely Euridice, compelling character singing from Ossian Huskinson as Pluto, and Frazer Scott as Charon.

A special word of praise for the veteran Diana Montague’s Messenger, who movingly conveys the news of Euridice’s demise.

Cheerfully she proclaims she can only do ‘old bag’ roles these days. Well, if only all old bags put on as winning a turn as she did.

At the end, as the cast took their bows to thunderous applause, hush was called for, and one of Monteverdi’s most beautiful madrigals was performed.