After a whole season of virtual awards shows, the 2021 Oscars were held in person on Sunday, April 25 — with an IRL red carpet to match.

Gone were the designer pajamas and — gasp! — hoodies spotted during the Emmys and Golden Globes in recent months; ahead of the Academy Awards, nominees and presenters were warned that athleisure wasn’t going to cut it.

“We’re aiming for a fusion of Inspirational and Aspirational, which in actual words means formal is totally cool if you want to go there, but casual is really not,” read a letter sent around by the show’s producers in March.

As a result, Sunday’s red carpet marked a return to the glitz and glamour viewers are used to seeing during awards season, with Oscar gold emerging as the night’s dominant color trend and stars like Lakeith Stanfield and Colman Domingo wowing in eye-catching menswear.

Below, our best-dressed picks. 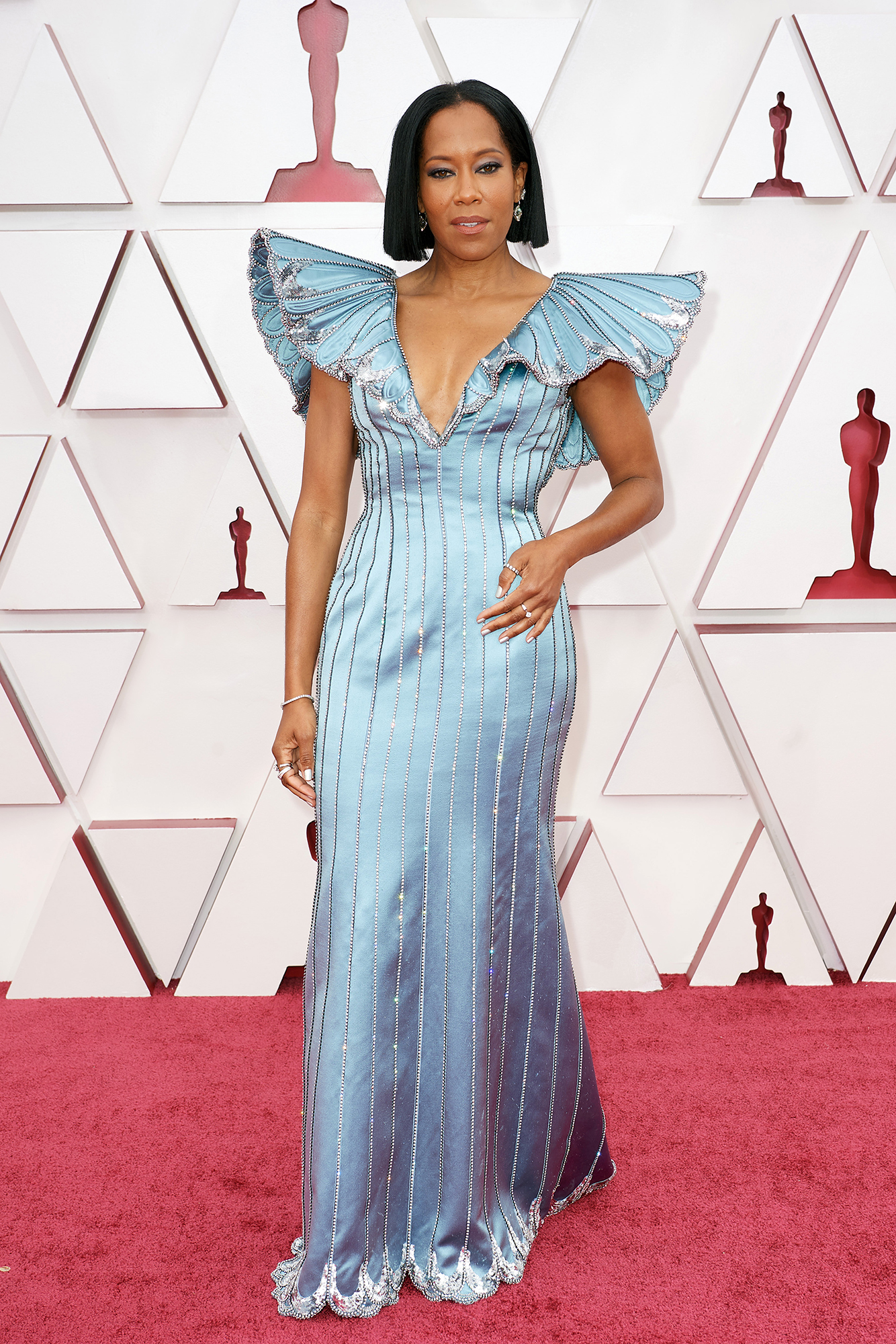 The “One Night in Miami” director spread her wings in this stunning sky blue Louis Vuitton gown with butterfly-inspired shoulders. Adorned with 62,000 sequins and 3,900 Swarovski crystals, it actually set an embellishment record for the fashion house, per Vogue. 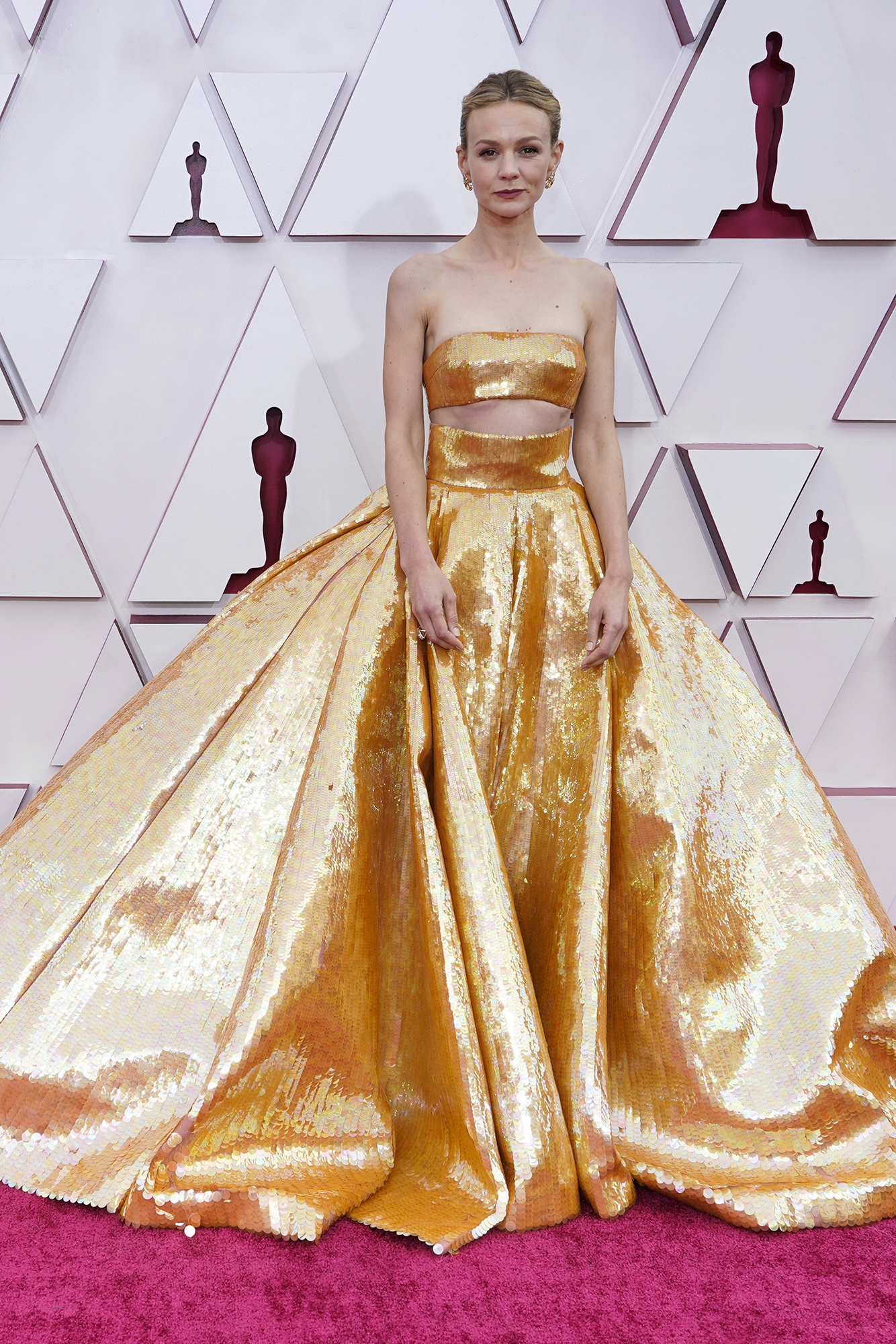 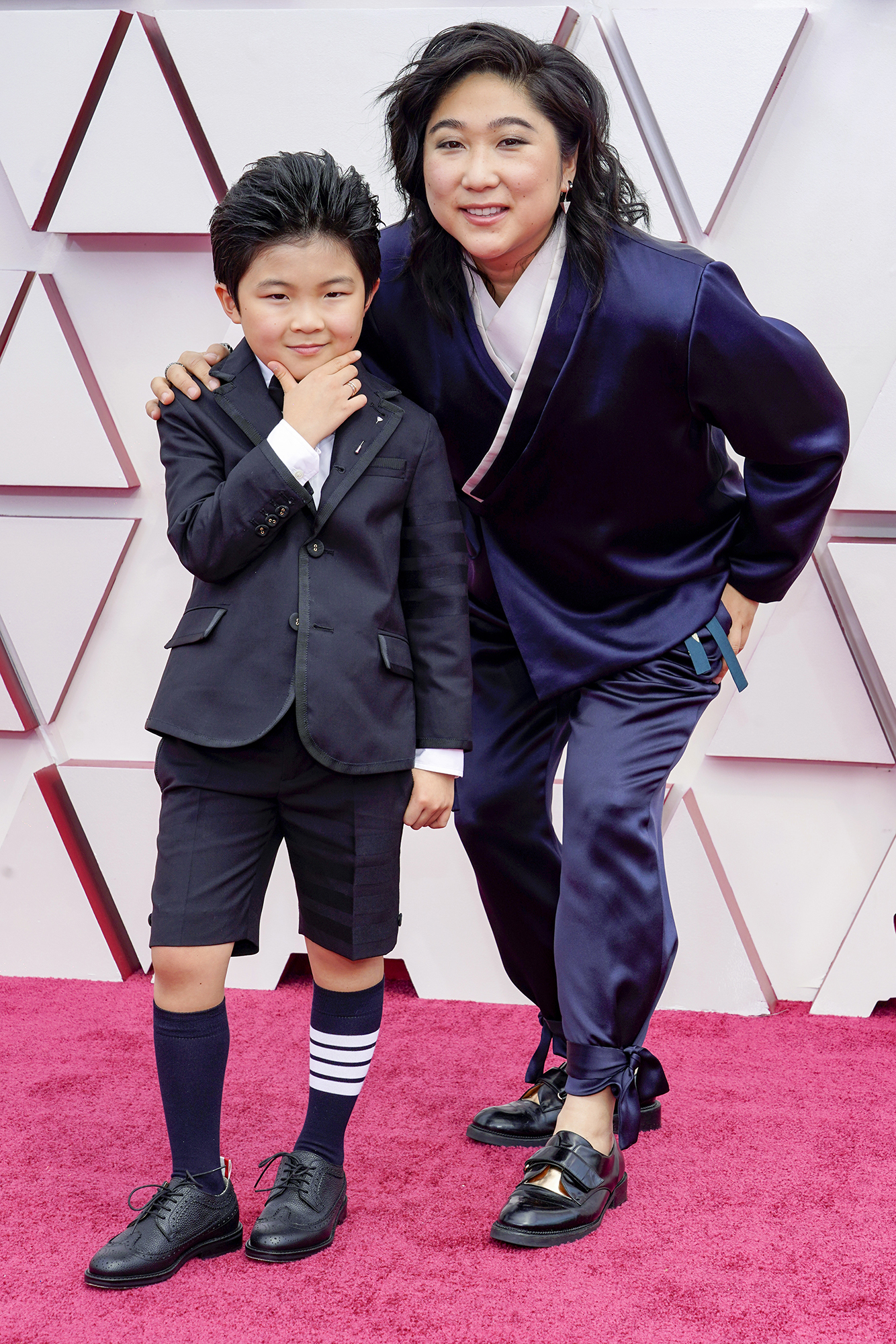 At just 9 years old, the breakout star of “Minari” already has style in spades. For his first-ever Oscars, he was dapper and darling in a pint-sized Thom Browne shorts suit, knee socks and oxford shoes. 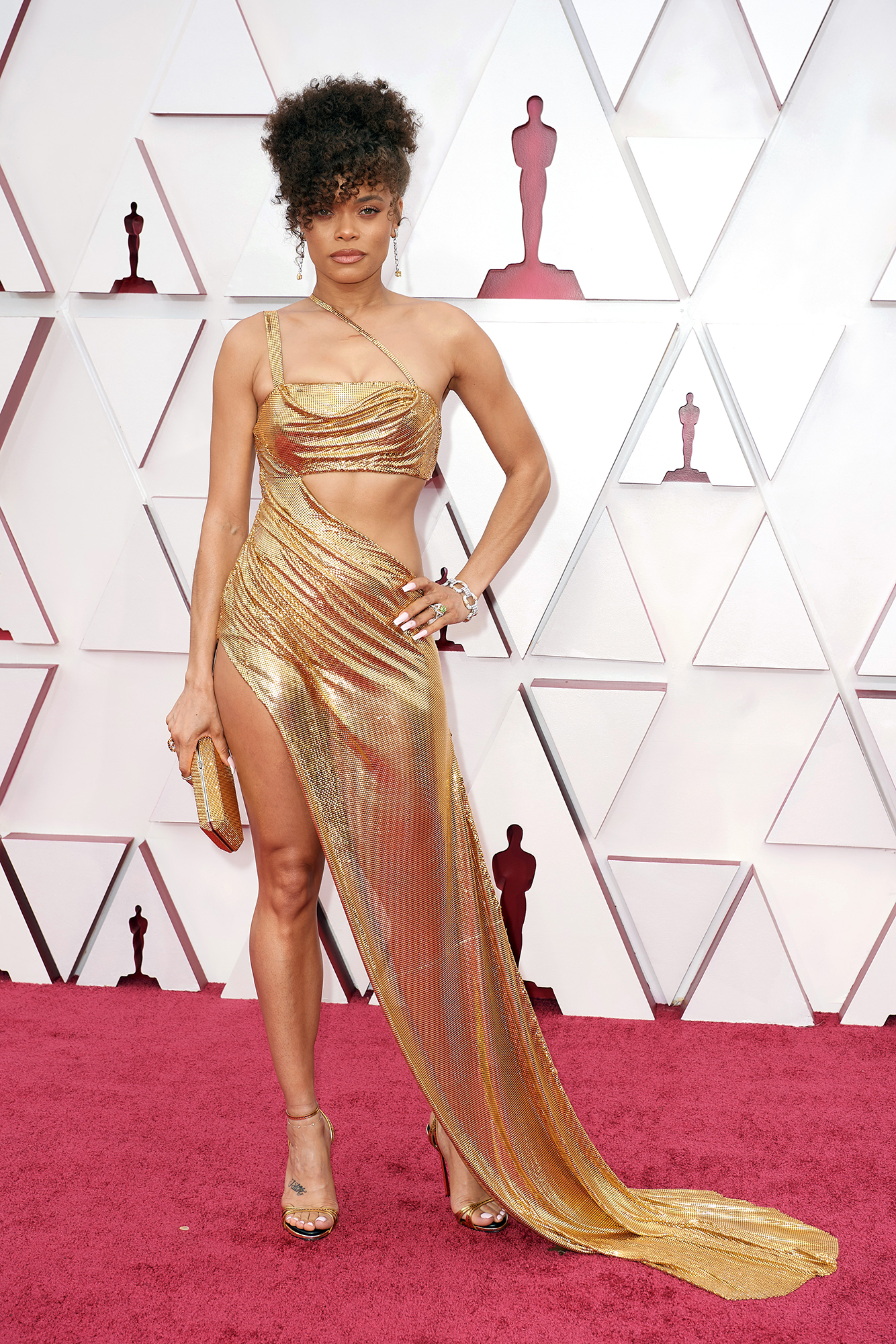 The star of “The United States Vs. Billie Holiday” looked like a sexy Oscar statuette in her custom gold metal mesh Vera Wang gown, with its dangerously high slit and midriff cutout.

Day accessorized with over $2 million worth of Tiffany & Co. diamonds, including drop earrings and a bracelet studded with sparkling yellow stones. 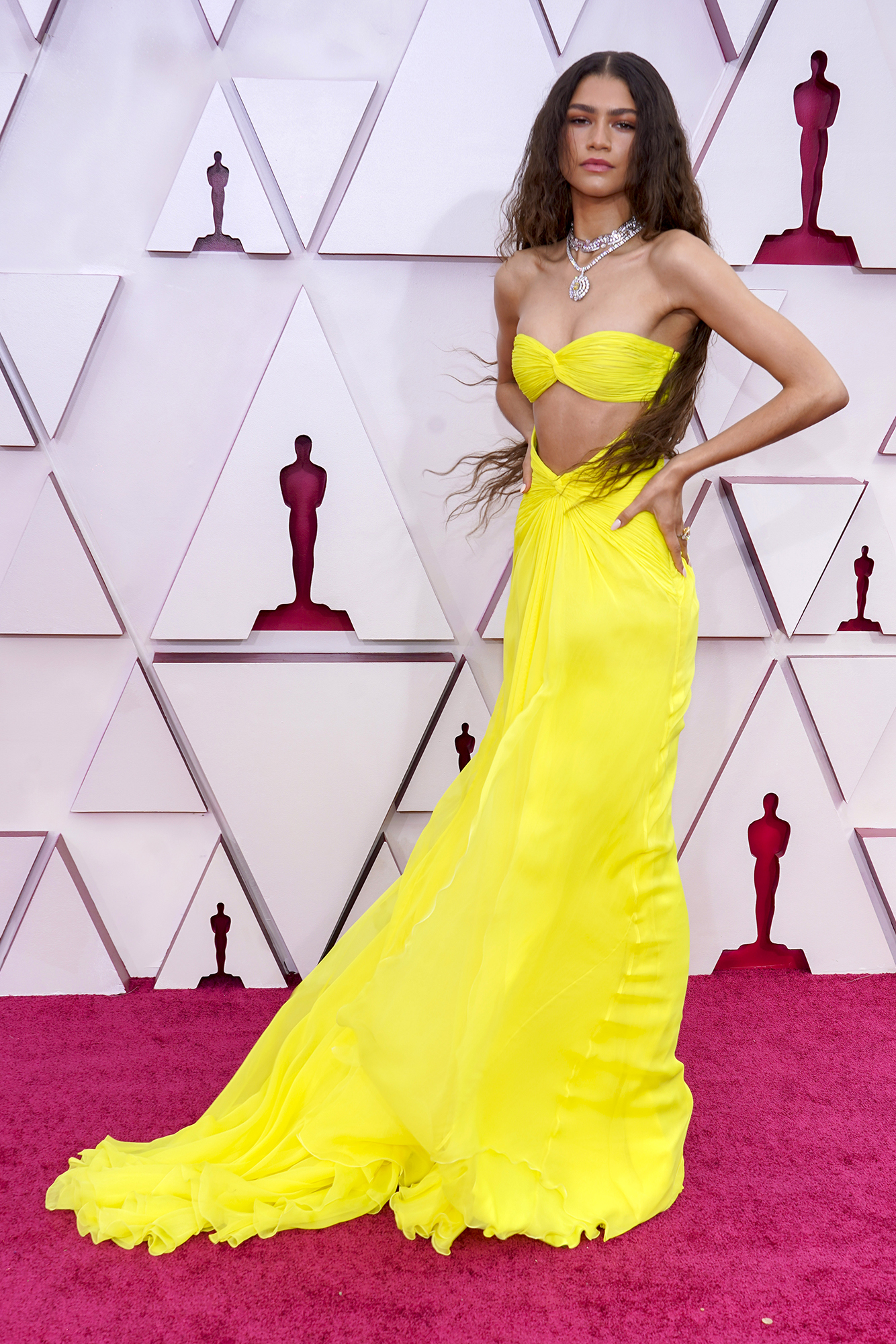 The “Euphoria” actress looked like a ray of sunshine in her sunny yellow Valentino gown, which she paired with a whopping $6 million worth of Bulgari jewels totaling over 183 carats. 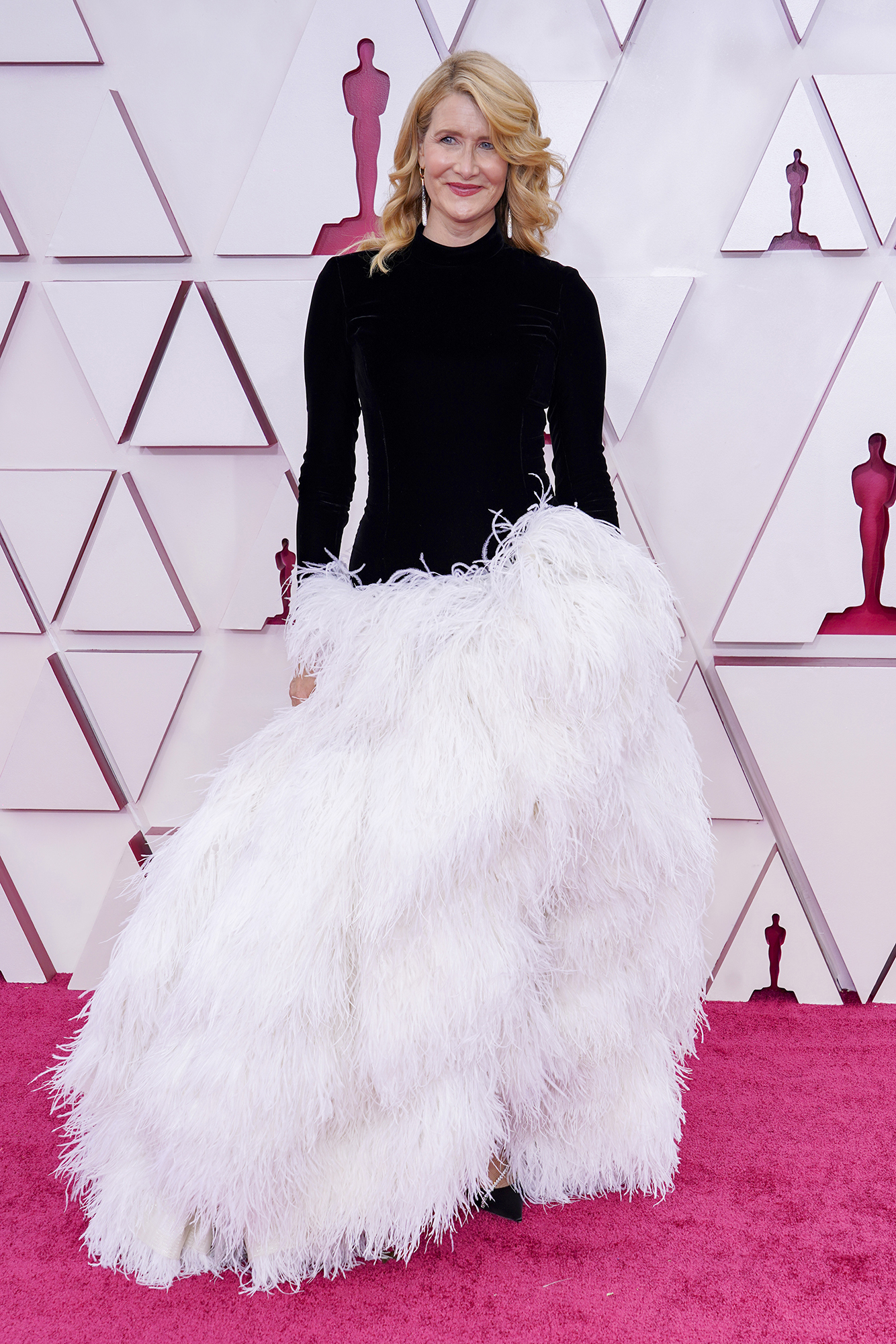 With its sweeping skirt dripping with ostrich feathers, the “Marriage Story” star’s black-and-white Oscar de la Renta was a perfect example of a dress that might’ve fallen flat on Zoom, but made a major impact on the red carpet. 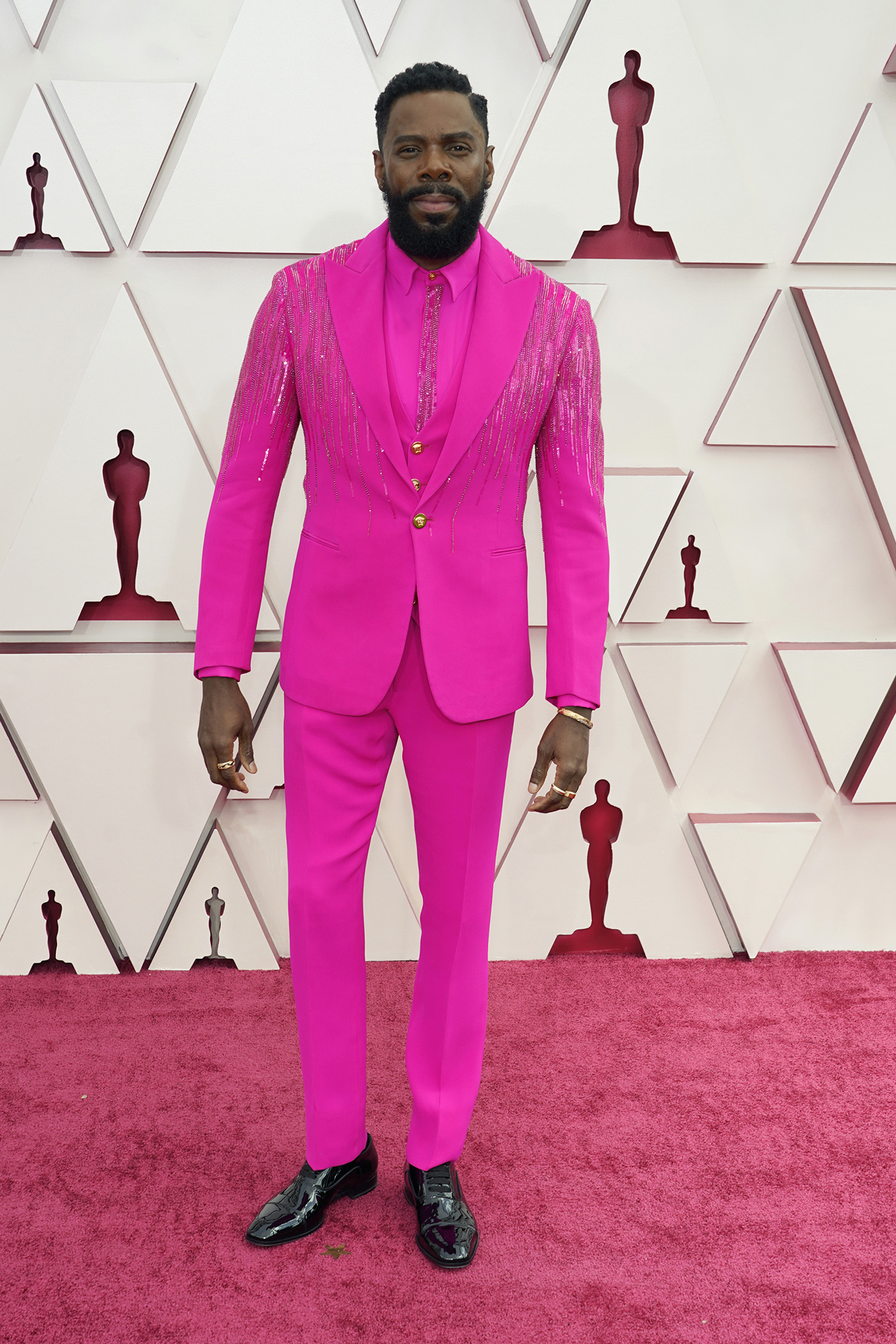 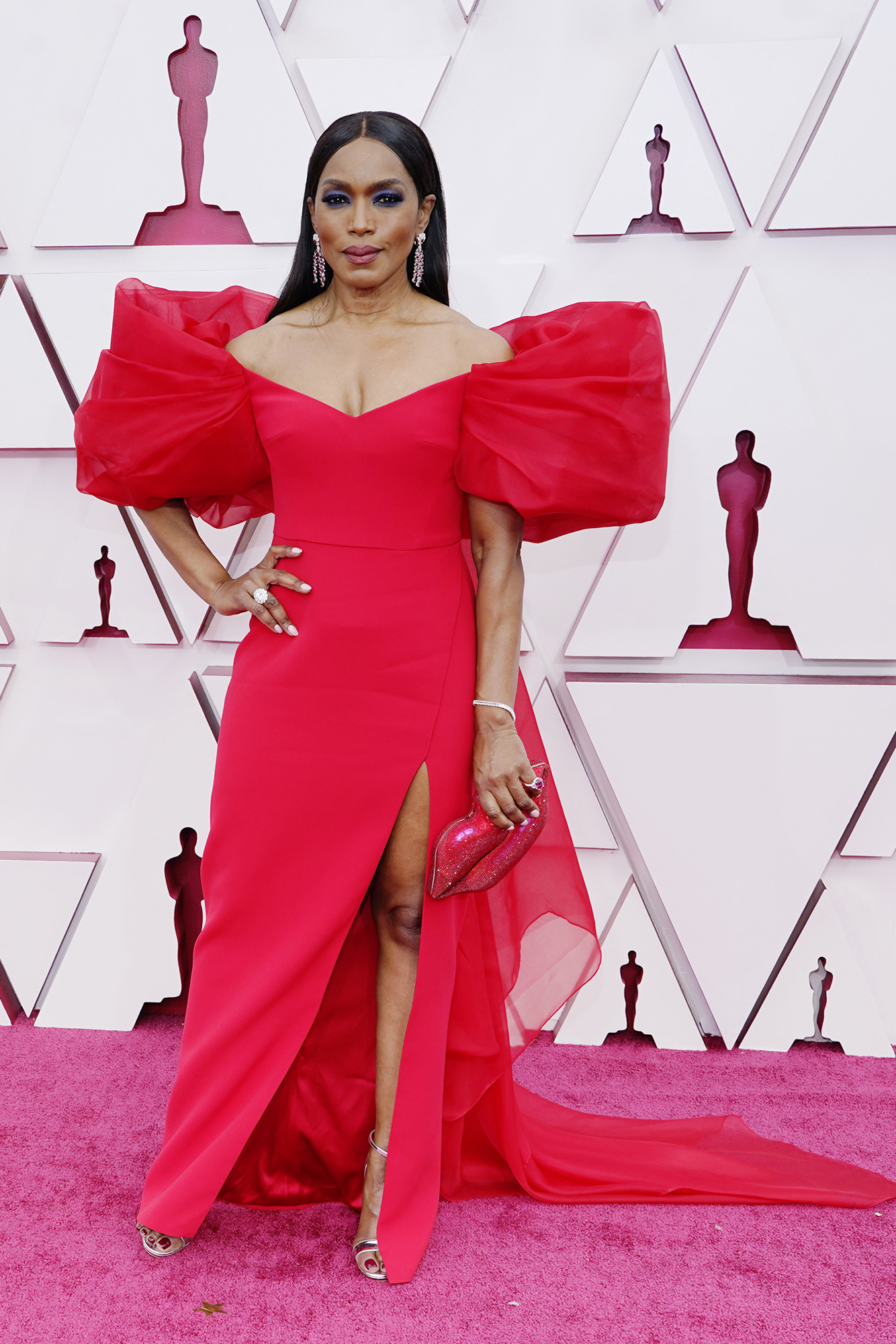 Stella may have lost her groove, but the actress who played her sure never did. With its draped organza shoulders and dramatic train, Bassett’s red off-the-shoulder Alberta Ferretti frock was equal parts pretty and playful. 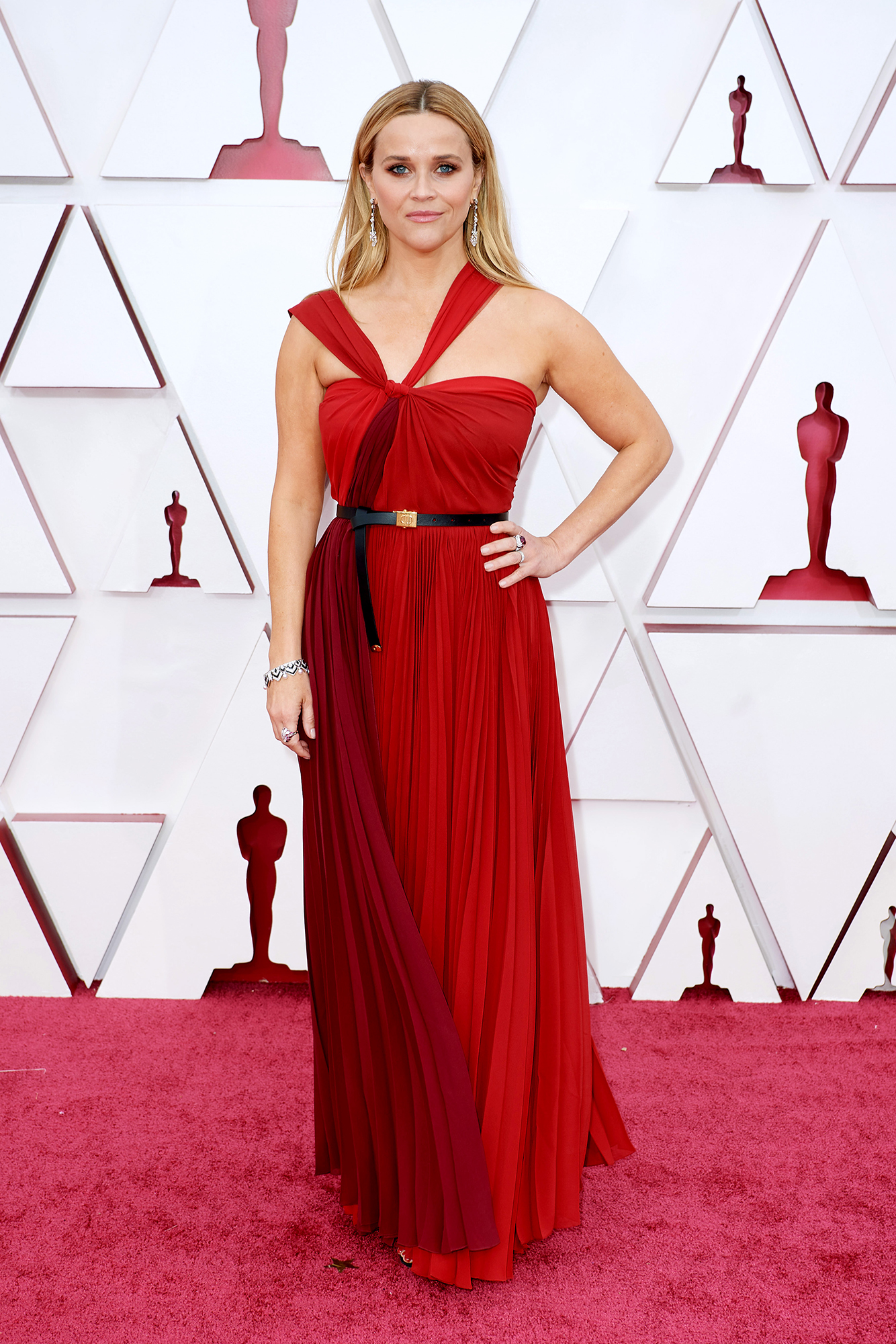 We loved the Grecian feel and belted waist of the “Big Little Lies” star’s red asymmetrical Dior dress, which she accented with Bulgari jewels. 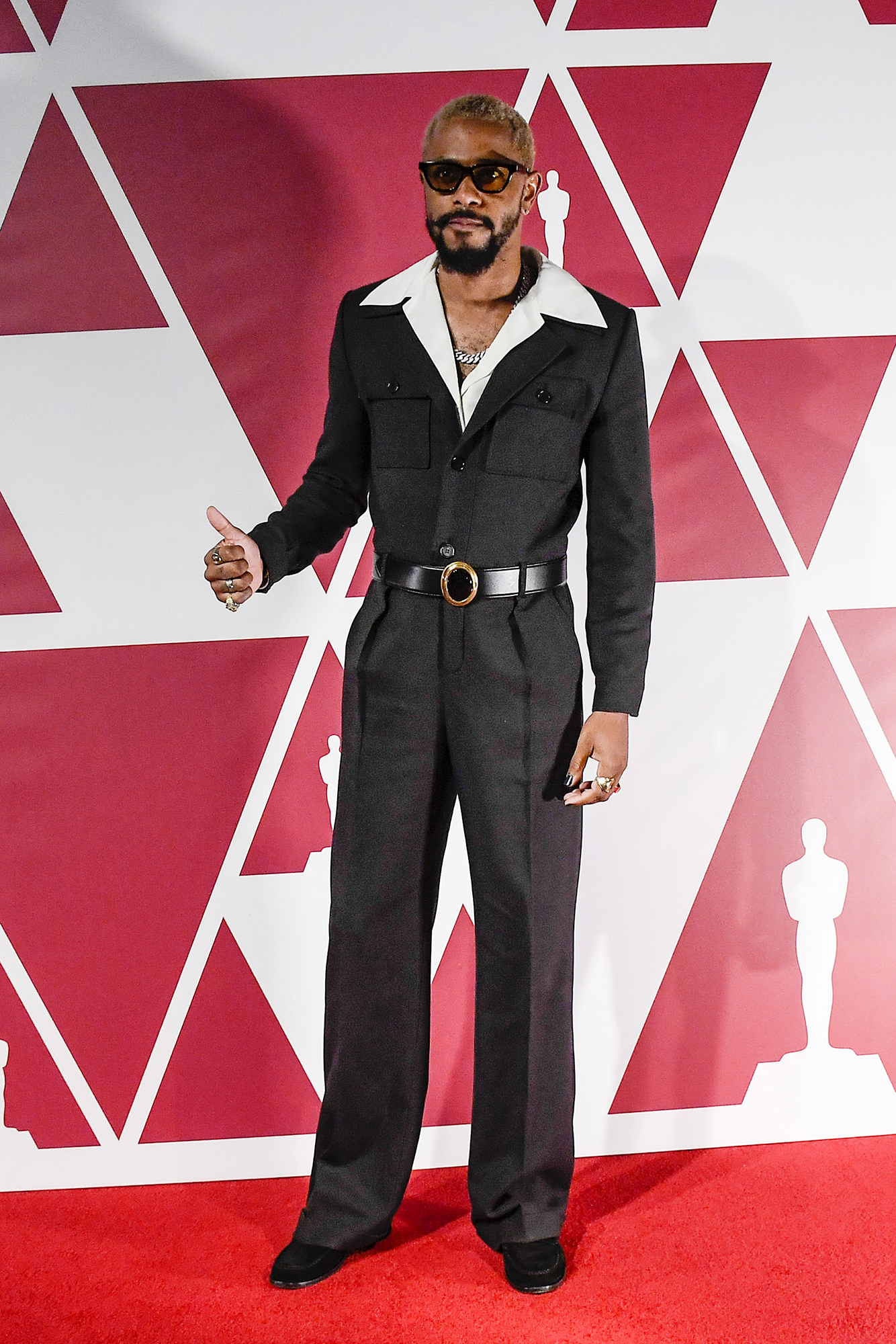 With his custom Saint Laurent by Anthony Vaccarello jumpsuit, the “Judas and the Black Messiah” actor made the traditional tux look downright tired. From the belted waist to the gold chain necklace, everything about Stanfield’s ’70s-inspired look was groovy, baby. 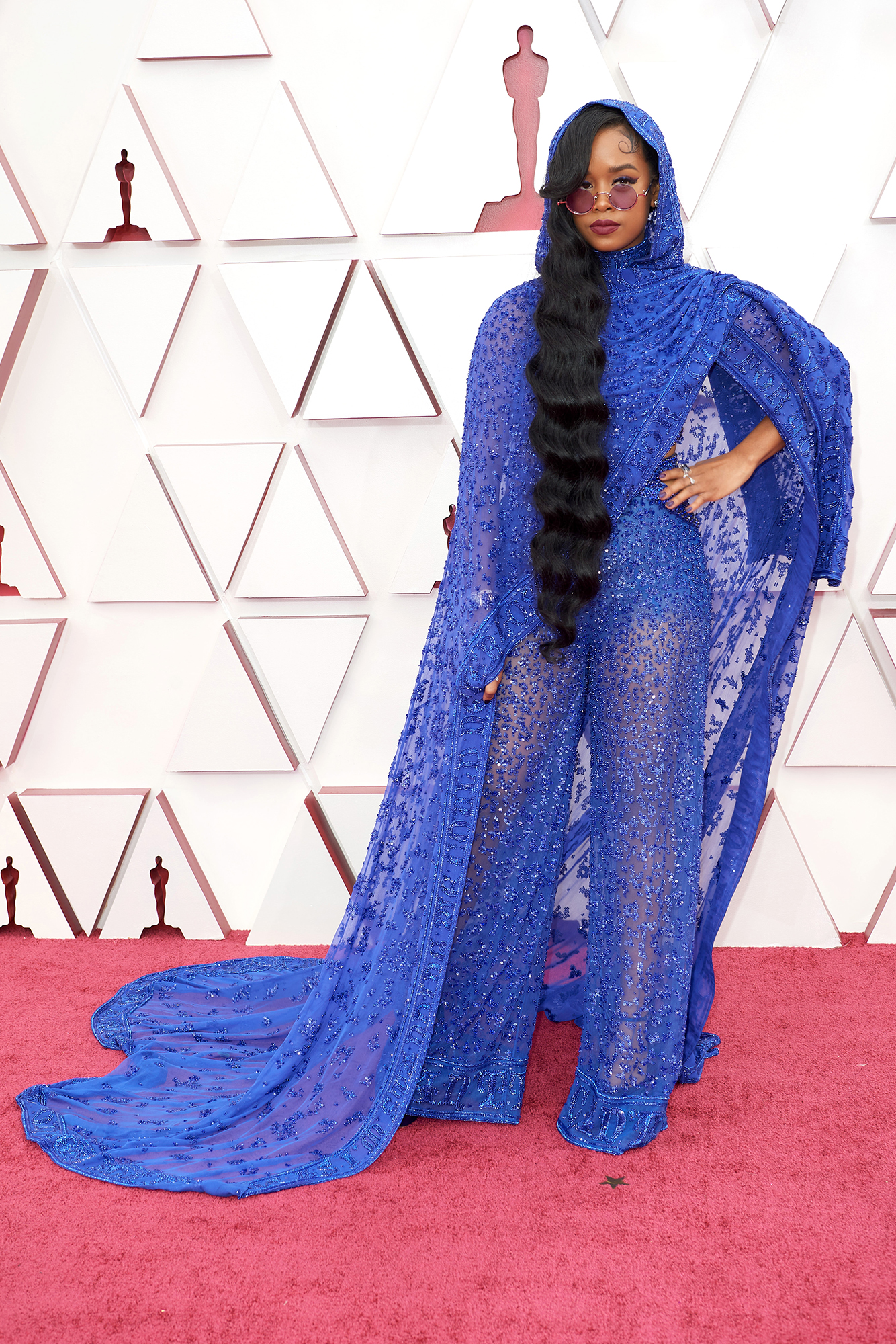 It’s never a bad time for a Prince tribute, and the Best Original Song nominee beautifully honored the Purple One with her violet beaded Dundas jumpsuit and matching Bonnie Clyde sunglasses.

Look closely, and you can make out lyrics from her winning song — “Fight For You” from “Judas and the Black Messiah” — along the edge of her cape and pants.