Soldiers, sailors, airmen, Marines — and now, guardians. Vice President Mike Pence announced Friday that members of the Space Force, the sixth and newest branch of the U.S. military, will be called “guardians.”

“We just returned from the Oval Office and so it is my honor, on behalf of the President of the United States, to announce that henceforth, the men and women of the United States Space Force will be known as guardians,” Pence said during a speech at the White House to commemorate the one-year anniversary of the Space Force.

The guardians “will ensure for generations that America remains as dominant in space as we are on land and sea and air,” he added.

It was my honor to announce today, that the men and women of the Space Force will be known as GUARDIANS! #SemperSupra 🇺🇸 pic.twitter.com/Wbzmqfy9aJ

According to the Space Force, the name was chosen after a yearlong process that involved hundreds of suggestions by both space professionals and members of the general public.

“The opportunity to name a force is a momentous responsibility,” the military branch said in a statement. “Guardians is a name with a long history in space operations, tracing back to the original command motto of Air Force Space Command in 1983, ‘Guardians of the High Frontier.'”

“The name Guardians connects our proud heritage and culture to the important mission we execute 24/7, protecting the people and interest of the U.S. and its allies,” it added. 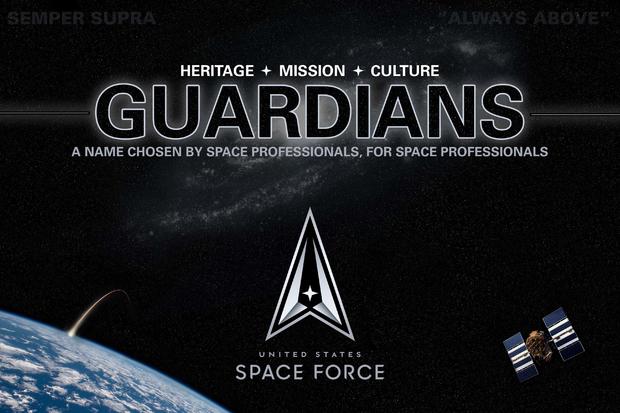 The name drew immediate connections to the iconic Marvel comic series, “Guardians of the Galaxy.” Many jokingly questioned if the beloved character Groot could be the new mascot, while others asked if raccoons will be able to enlist, a reference to the character Rocket Raccoon.

James Gunn, the director of the films, tweeted, “Can we sue this dork?”

“Maybe your purpose on this planet isn’t on this planet,” the Space Force said in its first official recruitment video earlier this year.

Its logo, another apparent pop culture reference, features a symbol that closely resembles the Star Trek Starfleet logo, and its motto, “Semper Supra,” means “always above.”