Photos that sum up everything that's wrong with the world

It was the best of times, it was the worst of times! People share the photos that sum up everything that’s wrong with the world – from taking a selfie at a car crash to bathing alongside captive tigers

From technology to access to  all the gadgets imaginable to make life run smoother, there’s so many advantages to living in the modern world, but sometimes it’s easy to wonder if things have gone a little too far.

Bored Panda has rounded up a selection of images from around the world shared by the Humans of Capitalism Instagram account, which aims to expose the dystopian side of the world we live in.

They’ve been snapped by people who saw something strange and it made them question the reality we’re living in, and even their faith in humanity.

For instance, one motorist spotted a group of men stopping to take a selfie at the scene of a car smash, while elsewhere a woman posed to snap a picture while standing on the roof of a sinking car, proving that for some there’s nothing more important than social media likes.

In a similar vein, others despaired over a woman who paused to take a seductive picture while sprawled over a crucifix, while someone else’s heart sank at the sight of a bulletproof backpack for children. 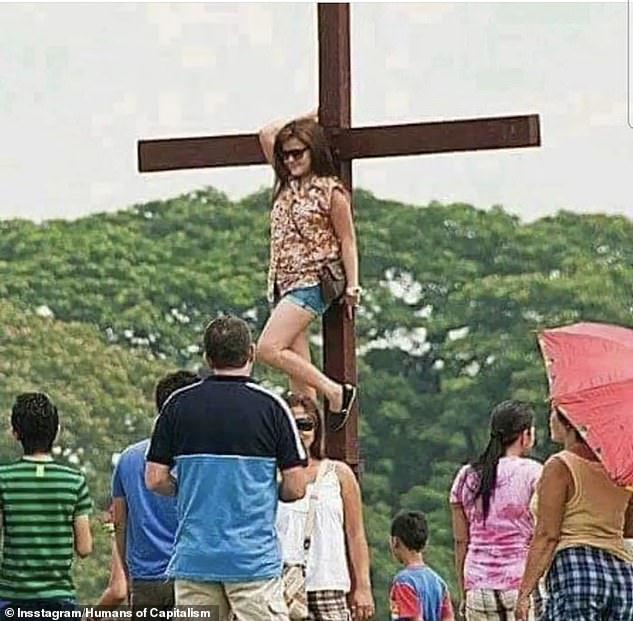 Should be crucified! Residents of Barangay Lourdes Northwest in The Phillipines were horrified by a ‘disrespectful’ tourist who posed on crosses erected for the re-enactment of the crucifixion of Jesus 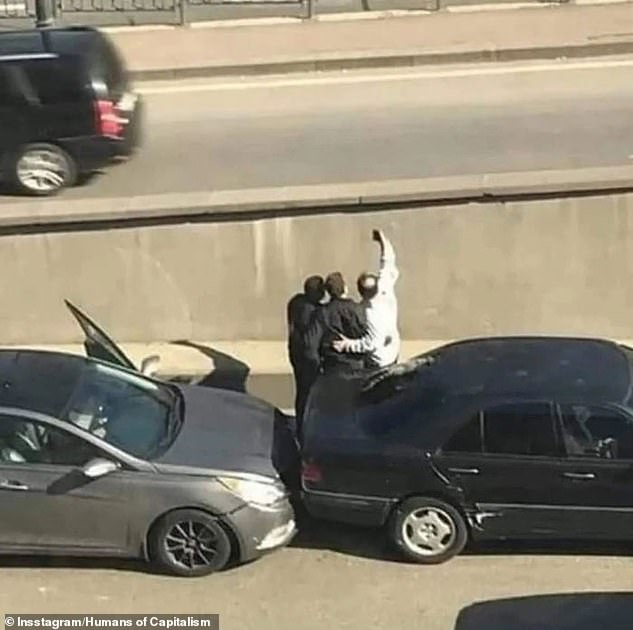 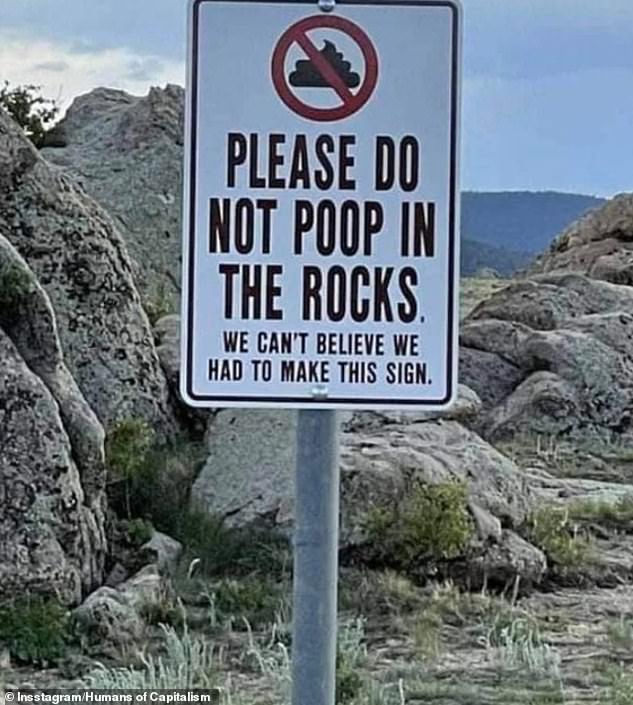 We can’t believe it either! The park rangers in Colorado who erected this sign were no doubt despairing at the actions of some tourists 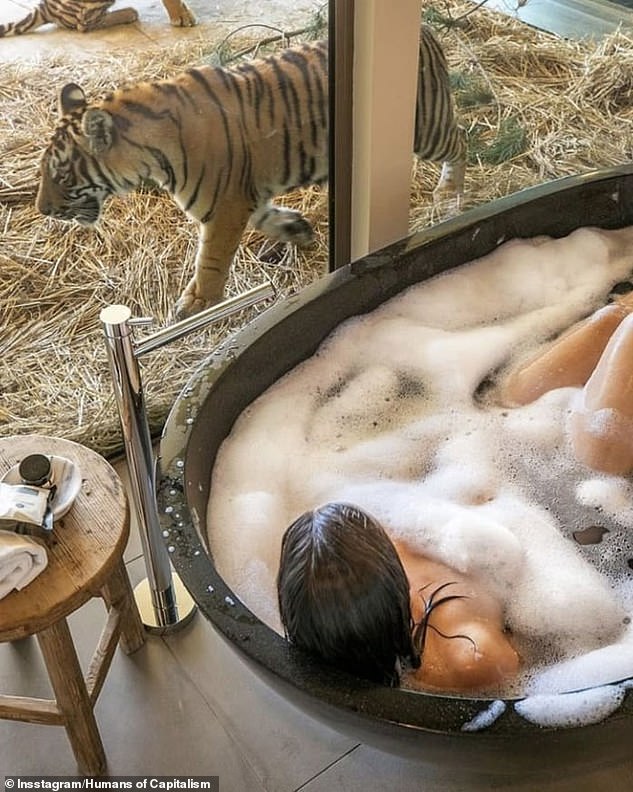 Not such a wild time! Animal lovers were less than impressed by the Jamala Wildlife Lodge at the National Zoo and Aquarium in Canberra where people can soak in the bath while watching tigers behind glass 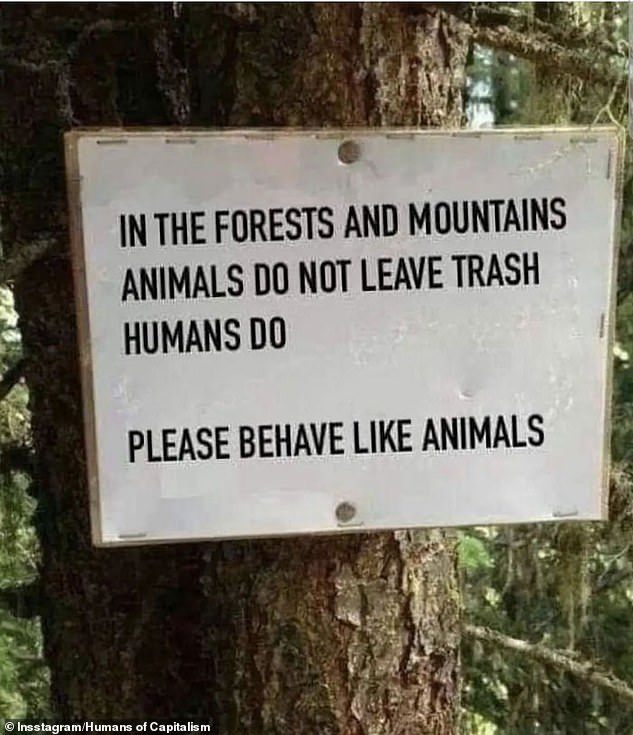 You know something’s wrong when you’re being told to behave like an animal! This sign, believed to be at a campsite in India, warned against leaving trash behind 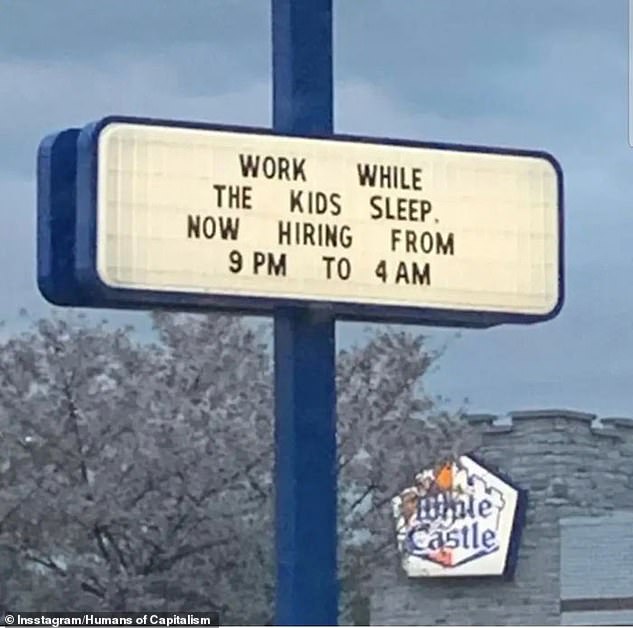 Depressing! People were downcast over this sign in the US encouraging parents to work all night at a burger joint to make ends meet 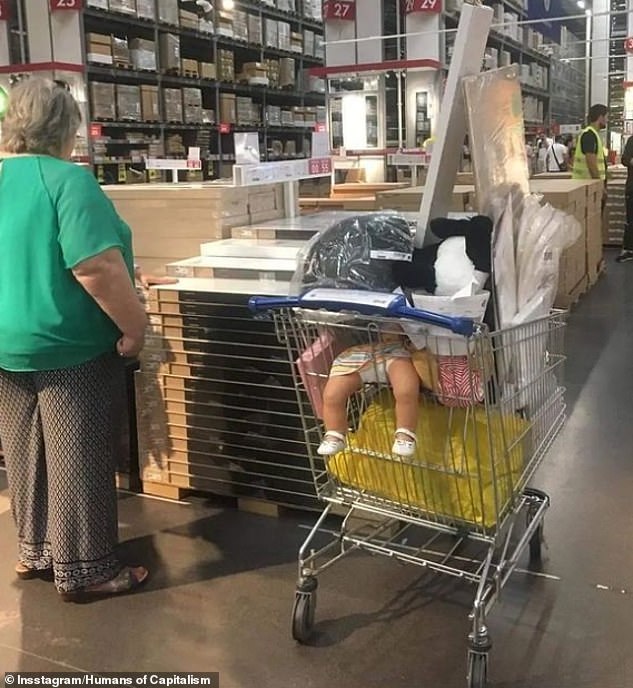 Must be off your trolley! A little girl was left buried under a haul of shopping at a furniture store 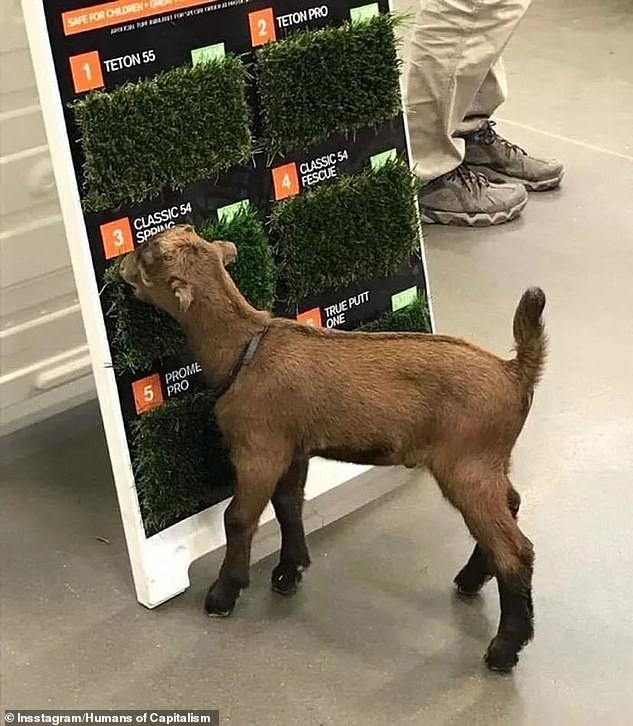 Get your goat! People were horrified to spot a creature nibbling on fake grass at a store in the US 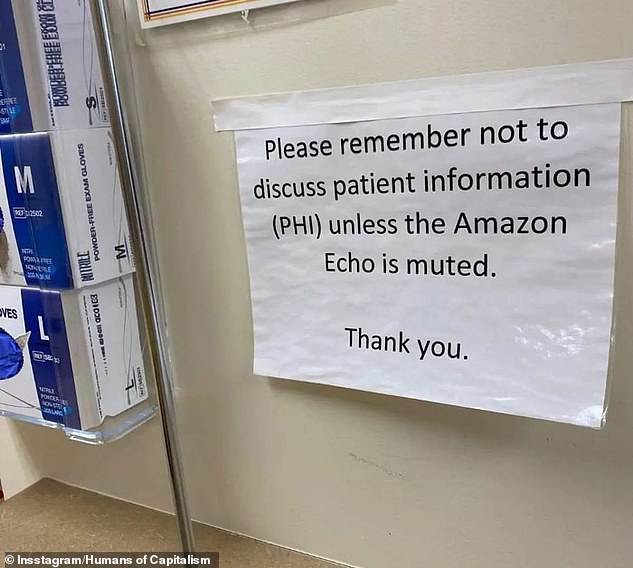 Always listening! Modern technology is fantastic, but this sign has serious 1984 overtones 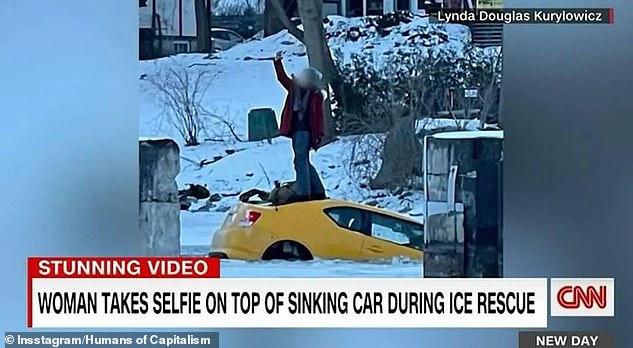 Get your priorities right! Viewers were shocked to see a woman taking a selfie while awaiting rescue from a sinking car in the US 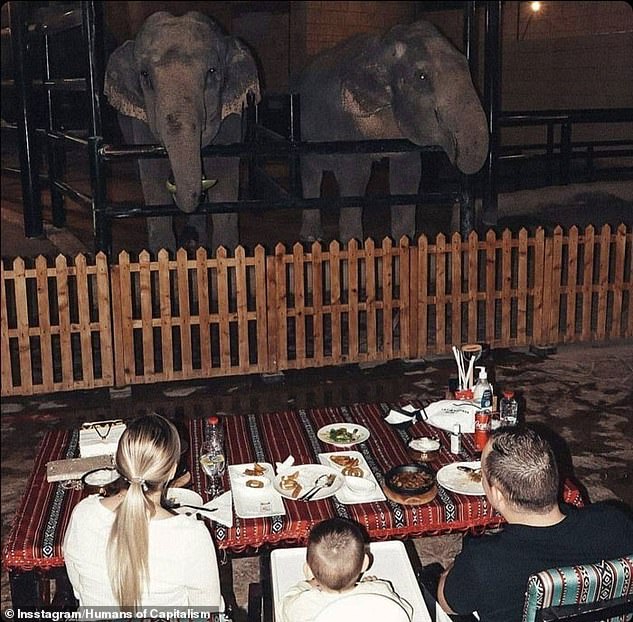 Zoo do you think you are? These elephants had to stay caged while a family watched them and enjoyed a meal 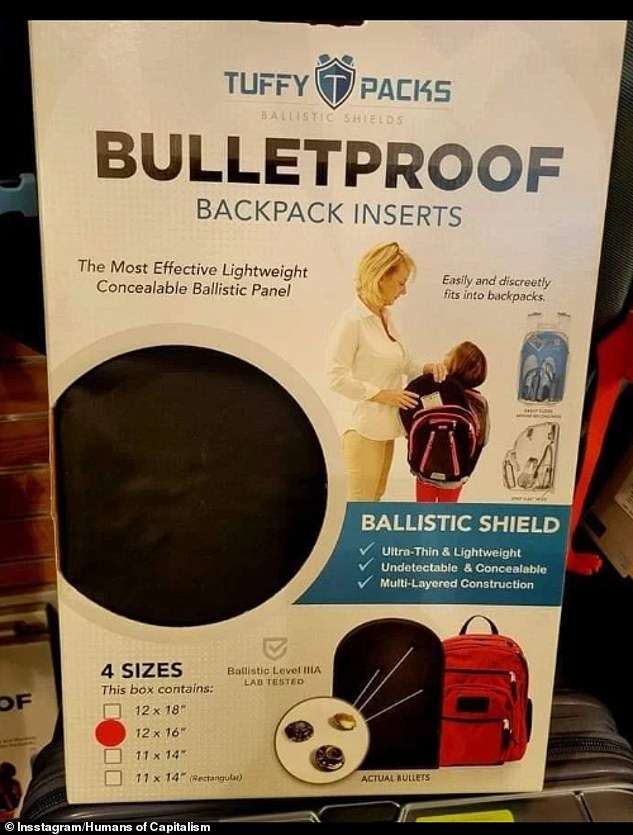 Not the kind of schoolbag any parent wants to buy: Sadly school shootings mean there’s a demand for this product in the US 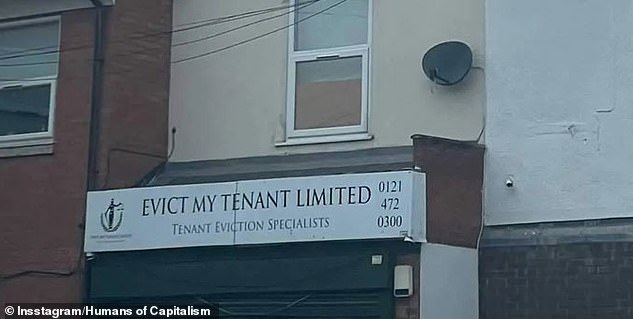 Brum deal! You have to make money somehow, but this eviction service in Birmingham. West Midlands, doesn’t look like the most cheerful place to work 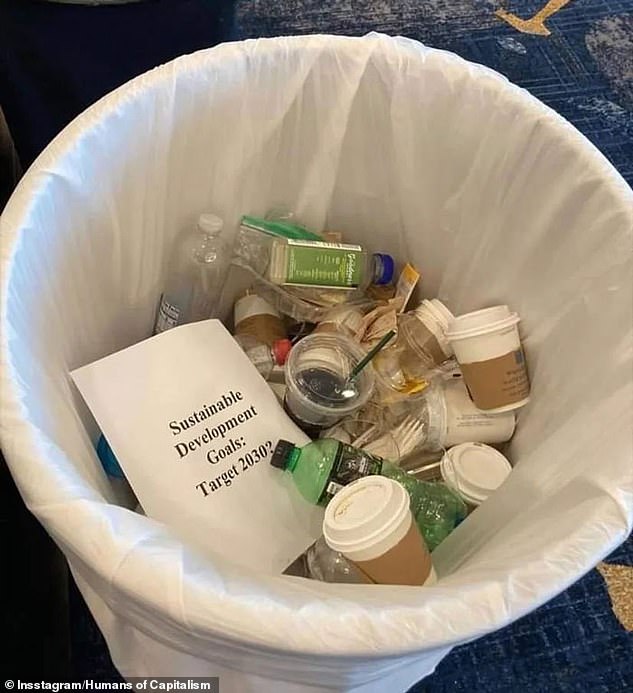 Trash those goals: It’s fitting that this sign ended up in the waste bin alongside disposable cups and a plethora of plastic