Home » Lifestyle » PLATELL'S PEOPLE: Becoming a mother isn't all about you, Amber Heard

PLATELL’S PEOPLE: Becoming a mother isn’t all about you, Amber Heard

What woman’s heart would not melt at this sweet picture of actress Amber Heard, 35, clutching to her breast her baby daughter Oonagh Paige?

Five years after she separated so messily from her wife-beating nightmare of a husband, Johnny Depp, the glowing Amber now says she has won what was always her right.

‘Four years ago, I decided I wanted to have a child,’ she tweets. ‘I wanted to do it on my own terms. I now appreciate how radical it is for us as women to think about one of the most fundamental parts of our destiny in this way.’

Amber adds she wants the world to think it ‘normal to not want a ring in order to have a crib’. 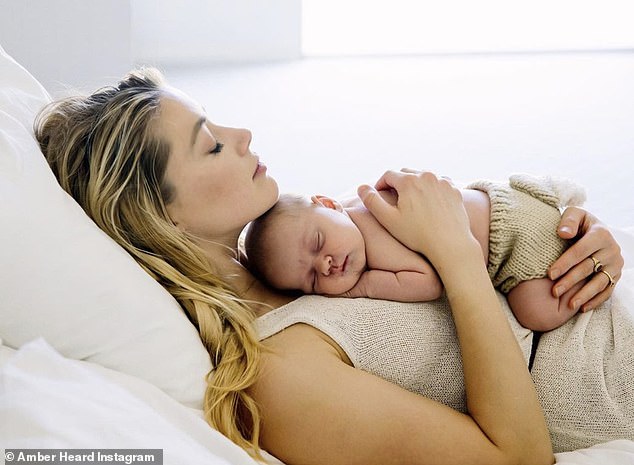 What woman’s heart would not melt at this sweet picture of actress Amber Heard, 35, clutching to her breast her baby daughter Oonagh Paige?

But is she right? Sure, the appeal of surrogacy is obvious: maternal ecstasy for Mum without the hassle of pregnancy or the pain of giving birth. You can defy biology and have a child whenever the fancy takes you.

Yet ‘womb-renting’, as its critics call it, is not a straightforward business. The baby has been gestated by a stranger — possibly paid — and the newborn taken from its birth mother’s arms younger than we would take a puppy from its. Thanks to donor sperm, there’s often no father to be seen.

When we think of Amber, and the appalling chaotic life she led with Johnny, are we enthusiastic about her prospects as a mother? The couple’s violent drug-and-alcohol-fuelled brawls were played out in open court, as this warring and vindictive pair chose to relive the hideous end of their ugly marriage.

That was a few years ago, of course, and Amber has been supported by her lesbian partner Bianca Butti. Let’s hope she is calmer today.

Yet I find her own language rather troubling. Not only does Amber apparently believe it’s her right to have a child ‘on my own terms’, she also says revealingly that baby Oonagh is ‘the beginning of the rest of my life’.

Sorry, what? How about the beginning of someone else’s life? Having a child, Amber, is not about you. It’s about the tiny, helpless person you have chosen to bring into the world.

No one has a ‘right’ to be a parent. Countless women who can’t have children still enjoy fulfilling, happy lives. I know — because I’m one of them.

Becoming a mother is the most selfless thing a woman can do. Forgive me if I have my lingering doubts that Amber understands that.

This is about a stripper, so it was appropriate, I suppose, that Jodie chose to wear a yellow strapped dress . . . and no underwear.

Surely now, at 34, Jodie realises that her talent — and not her perfectly honed buttocks — is enough to get her the plum roles.

As the greatest British actresses — Kate Winslet, Judi Dench, Helen Mirren, Emma Thompson and Helena Bonham Carter — have all proven, it’s not the pertness of your posterior that wins out in the end, but the power of your performance.

Tory-loathing, ‘comedian’ Romesh Ranganathan is to replace Anne Robinson on a celeb version of The Weakest Link quiz show, saying that ‘to step into her shoes is an anxiety-inducing privilege’. This humourless dolt isn’t fit to shine Anne’s stilettos, let alone try to wedge his big feet into them. Unlike Romesh — cited by a pressure group as typical of Left-wing BBC comedy bias — Anne is not prejudiced . . . she is equally spiky with absolutely everyone. Romesh, you are the weakest link — goodbye!

Is there anything more irritating than celebs posting pictures of their kids taken from behind so we can’t see their faces? Now the third Mrs Johnson shares yet another snap of the back of toddler Wilf’s head, with its mane of Bozzie Bear hair. The subtext seems to be: my child is so important, you can’t possibly see their face.

Matt Hancock is apparently set on rebuilding his ruined career on the back of ‘causes’ he feels ‘passionately’ about. What might these be? This is the man who, when he gave his wedding speech, reportedly thanked George Osborne before saying a word to his blushing bride. As one ‘friend’ rightly says: ‘I’m not sure what Matt feels passionate about, other than his career.’

Gorgeous pictures of Rishi Sunak and his new fox-red labrador puppy, Nova. But a curious name for an ambitious politician to choose: a ‘nova’ is a star that bursts into the night sky, dazzles brilliantly — then goes pfutt. And who would want Dylin to be the pooch next door?

So much for Love Island’s promise to be a ‘kinder’ show this year, concerned for the wellbeing of its preening contestants. Just four episodes in, it’s already embroiled in a social media hate-fest.

The arrival of Chloe Burrows, 25, caused Shannon Singh (who’d claimed to enjoy sex ‘up to eight times a day’) to be booted off. Chloe has been bombarded with death threats and told by trolls to kill herself, and her family have begged people to stop these ‘vile’ attacks.

As if all that wasn’t bad enough, this year the show — and Shannon in particular — have treated us to the eye-watering ‘underboob’ bikini, which exposes the bottom half of a woman’s breasts.

Time to put the whole rotten format in the bin.

We all adore Claudia Winkleman, yet enough with the faux self-deprecation from a woman who’s made a fortune out of her stupid fringe, minimal talent and fake tan. As she approaches her 50th, she told Woman & Home mag: ‘My body is falling apart: I look like Meat Loaf naked.’ It gets a bit trying for fans when a woman who’s a size 6 laments about her body when her slender frame could fit into one of Meat Loaf’s trouser legs.

How cynical that after 27 million viewers tuned in to the BBC to watch England defeat Germany — Auntie’s biggest audience share in years — the Corporation announces it will pursue and prosecute anyone over 75 who dares not to pay their licence fee, even though they used to get it for free.

As my sprightly neighbour Gary, who’s of a certain age, said to me: ‘Another own goal for the BBC — I’ll see them in court!’

The Di is cast – but what a mess

As Princes William and Harry unveiled the long-awaited statue of Princess Diana, a nation gasped — in disbelief. One of the most beautiful women in our history had been reimagined with the muscular body of an Eastern European shot-putter. A sullen and icy glare, a welder’s hands, the arms of an orangutan and those tree-trunk legs? Unforgivable. I’m surprised her boys didn’t fling the shroud right back over it.

Now worth £45 million and her life so micro-managed by her ‘conservator’ father that she even can’t buy chewing gum without his approval, Britney Spears has sadly lost her court action to free herself from daddy’s control. Given that dad lives off her earnings, my advice would be to stop singing, have the baby you long for and marry your boyfriend. Like any parasite, as her father clearly is, it only survives by feeding off its host.

A home fit for a British hero

After Corporal Shaun Jardine, then just 21, single-handedly stormed two enemy positions in Iraq, allowing his patrol to drive the enemy from a third, he was awarded the Conspicuous Gallantry Cross.

Eighteen years later this dad-of-two is selling his medals, expected to fetch some £140,000, so he can get his foot on the property ladder and provide a house for his growing family.

Many have been saddened by the news: but I salute him. He doesn’t need a ribbon to be sure his country appreciates its debt to him.

And what better tribute to his heroism than a family home of his own?