The Productivity Commission has been given eight months to examine the nation’s port system in a bid to boost profitability and operations across Australia’s wharves amid growing concern they are holding back the national economy.

Treasurer Josh Frydenberg on Thursday announced the commission would report back by August next year after a wide-ranging inquiry that will examine any trends or impediments to the “efficiency and dependability” of the ports and their supply chains. 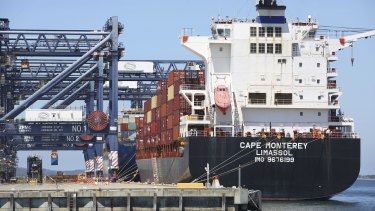 The Productivity Commission has been given until August to complete a review of the nation’s ports system.Credit:James Alcock

It will take into account any industrial relations issues and the regulation of privatised container ports.

A competition watchdog report into ports last month found global factors and restrictive deals between unions and port operators were contributing to rising shipping costs and delays. The commission review will look for any domestic issues that may be contributing to supply chain disruptions.

Ports around the world have been hit by long delays, caused largely by disruptions precipitated by COVID-19. This has included a fall in the number of truck drivers and port staff in some countries as well as the movement of containers into countries not normally part of major international shipping lines.

Mr Frydenberg said the efficiency of the ports was vital to the Australian economy.

“With more than $400 billion goods imported and exported every year, it’s critical that we lift productivity at our ports,” he said.

The commission’s terms of reference include looking for a way to benchmark Australia’s ports performance so they can be compared to overseas ports.

The economic impact of the maritime logistics sector, including the costs of curfews at some ports, will be examined as well as labour supply and skills issues across the sector.

Rail access to ports, the suitability of container storage and whether there is a role for governments to invest in any infrastructure needs will be canvassed.

The government has cited a World Bank report which found 80 per cent of Australia’s container ports were in the bottom quarter of ports worldwide in terms of productivity. The median in-port time for container ships in Australia was three times that of Japan and 50 per cent longer than New Zealand.

Mr Frydenberg made the announcement after a High Court decision on the operation of Port of Newcastle (PNO). Glencore Coal Assets Australia won the right to seek an access determination on navigation charges at the port under federal competition law.

But Australian Competition and Consumer Corporation chairman Rod Sims said there were concerns about the decision.

He said the port would be able to recover from current port users the costs for dredging the port’s shipping channel that had been historically funded by previous port users.

“The ACCC is extremely concerned that following the High Court’s decision regarding the calculation of the navigation charges at the Port of Newcastle, the law, as it stands, means PNO will receive a return on assets that it did not invest in, and some port users could end up paying twice,” he said.

“We will consider the judgment and its implications in full and form our own views on what legislative measures may be necessary to address this situation.”