Households face another hit from rising power bills just a day after inflation spiked to a 22-year high, setting up a federal election fight for the Coalition and Labor as they grapple with official figures revealing underlying electricity prices have more than doubled in the past year.

Experts warn the wholesale power spike will undoubtedly flow onto customers, with markets already pricing in even bigger rises in 2022 and 2023. Both Scott Morrison and Anthony Albanese have promised to keep power prices low after annual inflation rose to its highest level in two decades, pouring more pressure on the cost of living just weeks out from voting day. 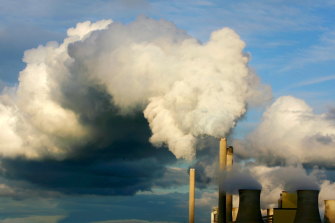 The price of Australian coal, rising sharply amid a global energy crunch, is set to drive up power bills this year.Credit:Fairfax

A Friday update from the Australian Energy Market Operator, which runs the electricity grid, shows the east coast wholesale price of electricity jumped 141 per cent to $87 a megawatt hour in the March quarter compared to $36 a megawatt hour at the same time last year.

The price of coal has been soaring due to Russia’s war in Ukraine, deepening a global energy crunch and driving up wholesale electricity prices in Australia, where coal-fired power stations supply about two-thirds of the electricity in the grid.

The AEMO report shows the export prices of cargoes of thermal coal at the Port of Newcastle have more than tripled from $100 a tonne to $350 a tonne in the past 12 months, as the global demand ramps up.

The wholesale price of energy comprises 30 to 40 per cent of an electricity customer’s bill and sustained high prices can have a significant impact.

“Prices will need to reflect the increases that we’ve seen in the wholesale market.”

Futures markets – those used by big businesses and electricity retailers wanting to guarantee power supply at a certain price – are also being driven up by expensive coal and could send bills even higher. In the March quarter, contracts for the 2023 calendar year hit an east-coast average of $94 a megawatt hour, AEMO said. In NSW, 2023 contracts were at $131 a megawatt hour.

The looming power bill hikes come as an election debate heats up about rising consumer prices and cost-of-living pressures. Prime Minister Scott Morrison has said previously his government has delivered “affordable, reliable energy”, and has repeatedly pointed to an 8 per cent fall in electricity prices over the past two years, while claiming Labor’s energy policy will drive up bills.

“That’s why over the last two years we’ve been able to cut the cost of electricity by 8 per cent, and since I became Prime Minister it’s fallen by over 9 per cent,” Morrison said on Thursday. “When Labor were in power, electricity prices doubled. They increased by over 100 per cent, an average annual increase of over 12 per cent.”

Morrison said the threat of the Coalition’s Australian Domestic Gas Security Mechanism (ADGSM), which could be triggered to reserve some gas that cannot be exported and must be sold domestically, had helped to keep power prices down. However, the government has never triggered this mechanism.

Federal Labor has committed $20 billion for a “Rewiring the Nation” policy, which it says would follow the AEMO blueprint for transmission projects, known as the Integrated System Plan.

Labor has cited independent modelling of its plan to claim it would save bill payers $378 on their electricity charges by 2030.

“When it comes to the modelled savings on power bills, we’re talking about the middle of this decade (in 2025), $275 a year,” said shadow Treasurer Jim Chalmers.

Experts have questioned this claim and said international markets can destroy price saving forecasts. In the 2019 election campaign, Energy Minister Angus Taylor promised to introduce a “price target” to cut the average wholesale electricity price to less than $70 a megawatt hour by the end of 2021.

Australian Bureau of Statistics figures show electricity prices went up 3.5 per cent over the year, contributing to an overall inflation figure of 5.1 per cent.

Despite the ADGSM, natural gas prices are also rising across the east coast and around the world, driven in part by the global energy crunch, which Zembrodt warned may further inflate power bills in the future.

Zembrodt said the federal government could impose a similar measure to shield Australian power stations from international coal prices. But she doubted it would be politically feasible for a government to limit supplies amid an ongoing international energy crunch.

“The government has the authority, if they wanted to do something like what they do in the gas market… with coal, which would reduce the volume of coal exports,” Zembrodt said. “But that’s not necessarily something that’s palatable.”

The Australian Energy Council, which represents major energy generators and retailers such as AGL, EnergyAustralia and Origin Energy, has warned bills could start to rise from as early as the second half of this year.

The Australian Energy Regulator usually sets the default market offer – that is the maximum price retailers can charge households and small businesses – on May 1 each year.

But in an unusual intervention in April the Coalition government delayed the decision until May 25, after the federal election, which it said was provided more time to gather data on recent price fluctuations.

Zembrodt said it was difficult to predict how much bills would rise, until the regulator had finalised the default market offer.

The cost of electricity fell throughout 2020 and 2021, amid an influx of wind and solar farms and Australians’ ongoing uptake of rooftop solar panels, which have been cutting down daytime wholesale prices. At the same time, cooler La Niña weather conditions have reduced demand from power-hungry air-conditioners. However, prices are now being driven back up, partly because of coal generator outages and the increasing costs of buying the black coal needed to burn in power stations.

AEMO noted that prices in Victoria – where the brown coal that fuels the state’s power stations is not exposed to export markets – were lower than NSW and Queensland.

“This was due to the larger price-setting role of black coal generation and system security constraints limiting daytime electricity transfers from Victoria into NSW, despite an average energy price difference of $48 per megawatt hour.”