Kate blows a kiss to Prince Louis during Jubilee Pageant

Prince Louis is the youngest son of the Duke and Duchess of Cambridge. At just three years old, he doesn’t always behave himself at public events, looking fidgety in his seat and making faces at the crowd. According to a body language expert, another royal acted in a similar way when they were little.

Judi James told Express.co.uk: “Watching Louis pull a range of playful faces at the Jubilee celebrations it was easy to imagine he is the new Harry of the royal family – or at least Harry back in his royal joker days.

“Louis seems just as fond of tongue-poking as his uncle was at his age.”

Judi noted how both Kate Middleton and Princess Diana acted when their children misbehaved – no easy job when the world’s eyes are watching.

She said: “There are also obvious similarities in the way that both Kate and Diana seemed to take a reasonably tolerant and even indulgent view of their younger sons, with both women possibly realising how stifling royal protocol can be, and therefore keen to allow their boys to have as much freedom of expression as possible. 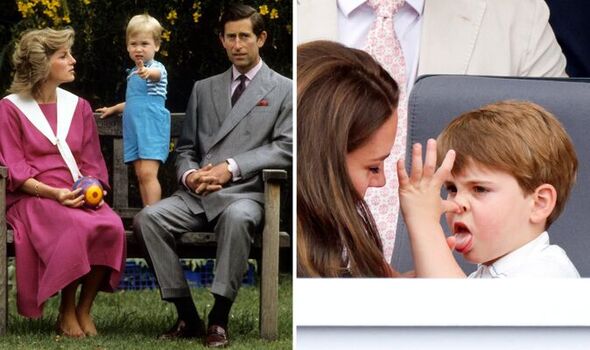 “We can see moments during the Jubilee when Kate does seem to be talking more firmly to Louis but his behaviour continues in a way that suggests he’s used to being indulged.

“For both Kate and Diana, the younger sons are very likely to be cherished as ‘theirs’ rather than also belonging to the nation as first-born future kings tend to be viewed.

“The ‘heir’ will always need to learn the royal ropes as early as possible, while the ‘spare’ can grow up with less restrictions.” 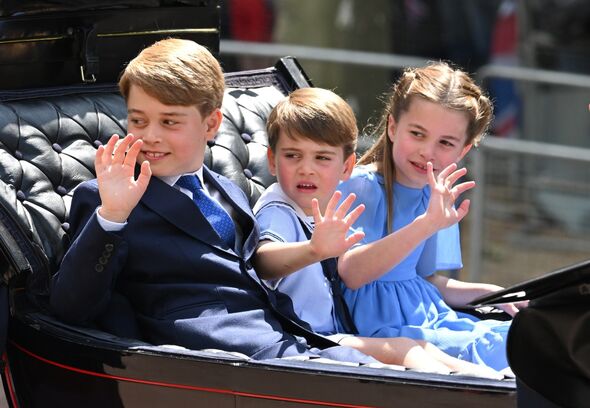 Looking at one key difference between Harry and Louis though, Judi said it “stems from the way that Louis appears to be much more of a confident and a keen entertainer than Harry was at his age”.

Judi continued: “Louis has two older siblings to both cushion him and to compete with for attention, and he seems to be growing up confident to the point of fearless and spontaneously sociable as a result.

“He clambered happily through royal laps at the Jubilee until he landed on his grandfather Charles’ knee, and interacting readily with Zara and Peter’s fun-loving daughters.”

Meanwhile, Harry “always seemed to blend playfulness with a sweet and vulnerable side, either competing with his brother William in their play together or clinging to his mother as though she was his sole provider of comfort and confidence”.

“Many of the poses of Harry and Diana show Diana totally encircling her small son with her arms or her legs or both.

“She seemed extra protective of her younger son and he looked happy and completely at ease with all the undivided attention and hugs.”

Interestingly, Judi claimed there are similarities between William and George too – the two eldest sons.

She said: “William and George clearly seem to share many body language and behavioural traits and George appears, like his father did at his age, to have inherited a growing understanding of the sense of duty needed for his future role as king.

“But it is possible that William might be busy teaching his eldest son the kind of impeccable good manners that he didn’t always possess himself at that age, if stories of that time are to be believed.”

Judi noted that it wasn’t only Harry “doing the tongue pulling” at crowds when the brothers drove past with Diana.

The body language expert added: “William seems to be a very hands-on mentor for George, who in turn gets to see and use the father he clearly hero-worships as his prime role-model.

“When he was young though, William was said to have a reputation for being naughty, despite his more responsible public image and it wasn’t only Harry who was caught poking his tongue out on car journeys.”