Princess Eugenie has left hospital to begin family life with her husband Jack and their newborn son.

The first-time mother, 30, looked glowing as she was driven away from The Portland Hostpital by Jack Brooksbank, sitting in the back with their new arrival in his car seat.

Prince Andrew and Sarah Ferguson’s daughter flashed a smile and waved to photographers as she was driven away, looking fresh faced three days after welcoming her first baby with tequila boss, Jack.

Dressed in a tartan dress, the new mother covered up against the chilly temperatures in a classic camel coat and kept one hand one her baby son to keep him calm as he embarked on his first care journey.

This is Princess Eugenie and Jack Brooksbank’s first child, The Duke of York and Sarah, Duchess of York’s first grandchild, and the ninth great-grandchild for The Queen and The Duke of Edinburgh, but will not have a royal title.

It is not clear whether the couple are returning to their permanent home, Ivy Cottage at Kesington Palace, or Frogmore Cottage in Windsor, where the couple spent time before Christmas after being loaned the home by Prince Harry and Meghan Markle. 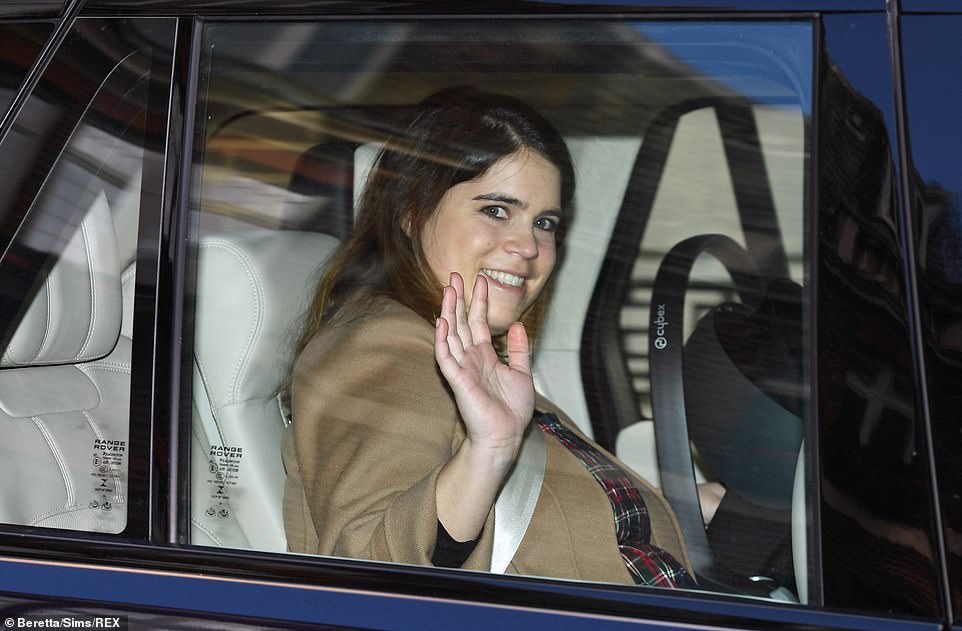 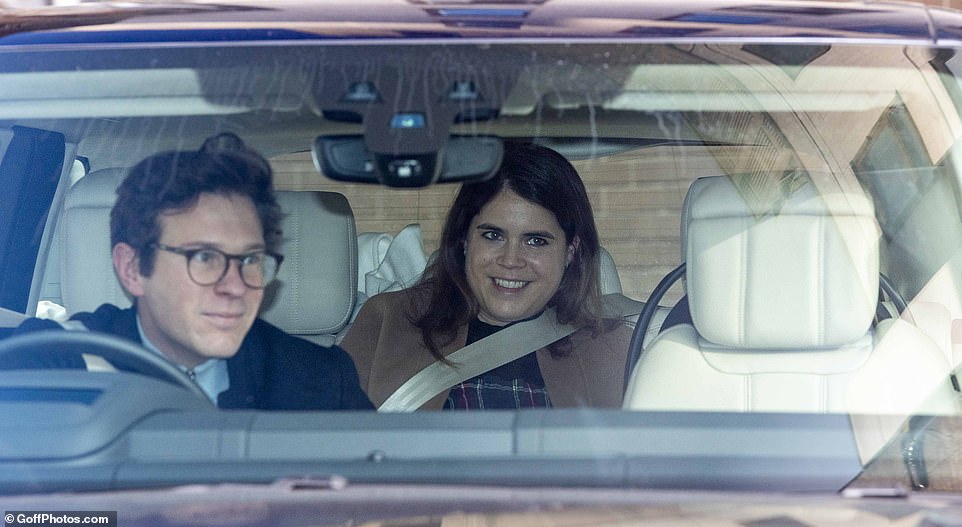 The Queen’s granddaughter, 30, had husband Jack Brooksbank at her side at The Portland Hospital in central London where their son – the Queen’s ninth great grandchild – was delivered at 8.55am on Tuesday.

The new arrival, who is 11th in line to the throne, weighs 8lbs 1oz and the couple broke with tradition by immediately sharing a black and white photo to Eugenie’s Instagram of their baby boy, showing them holding his tiny hand.

Proud new mother Eugenie followed the post with three blue hearts after welcoming her son at the luxury private hospital where Meghan Markle also gave birth to her son, Archie.

The Queen, The Duke of Edinburgh, The Duke of York, Sarah, Duchess of York, and Mr and Mrs George Brooksbank were delighted with the news, Buckingham Palace announced, adding that ‘Her Royal Highness and her child are both doing well’.

Princess Eugenie gave birth to her first child, a baby boy born on Tuesday at The Portland Hospital and broke with tradition by immediately sharing a black and white photo to Instagram of their new arrival, showing them holding his tiny hand 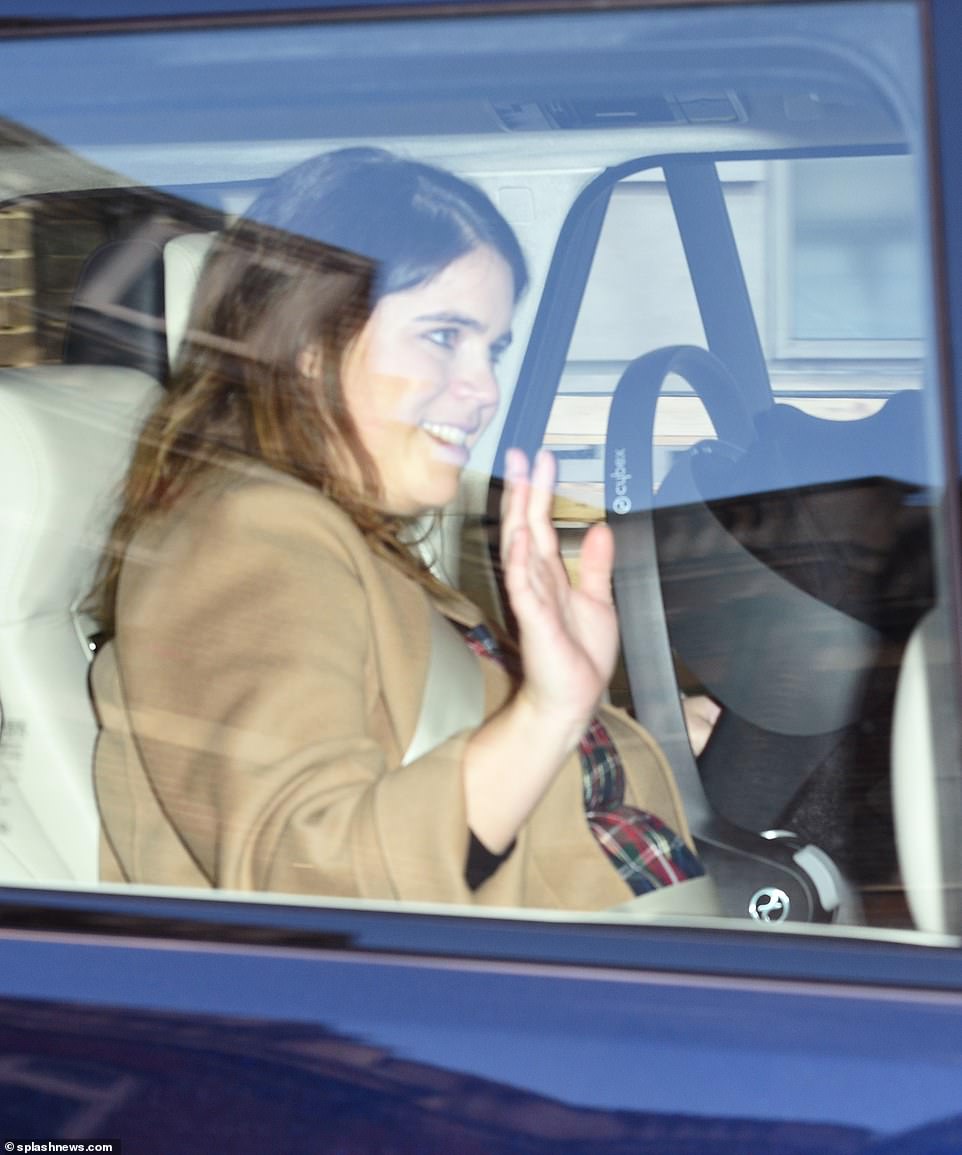 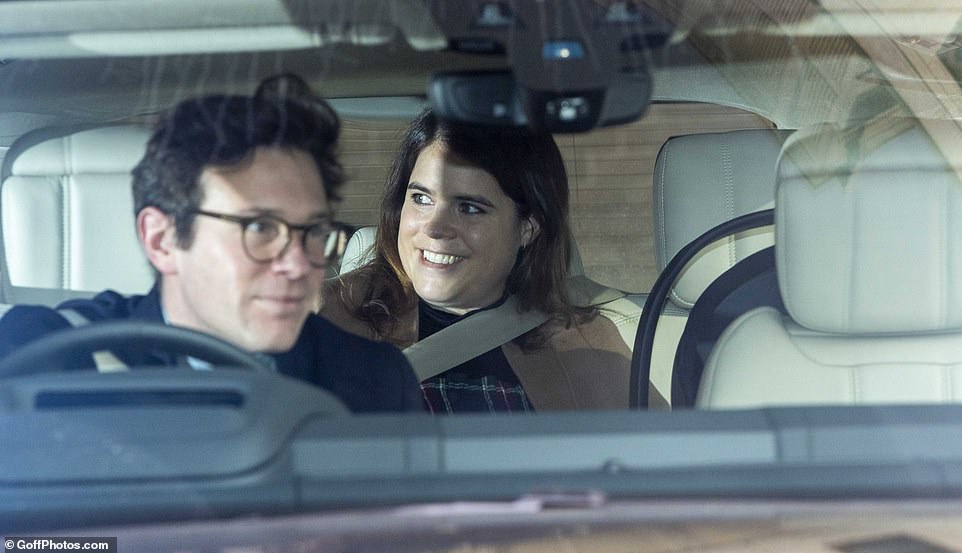 Proud parents: Their new son – whose name has not yet been revealed  – is Eugenie and Jack’s first child and the proud parents couldn’t hide their smiles as they drove away from hospital this morning

This is Princess Eugenie and Jack Brooksbank’s first child, The Duke of York and Sarah, Duchess of York’s first grandchild, and the ninth great-grandchild for The Queen and The Duke of Edinburgh, but will not have a royal title.

Princess Eugenie won’t accept a royal title for her baby if offered by the Queen because it is a ‘curse’ and she wants her child to have an ‘ordinary life’, a family friend told Vanity Fair in September.

A family friend of the couple revealed several months ago that titles ‘don’t matter’ to the couple, who will raise the child at their home of Kensington Palace, and said they just want ‘a happy healthy child.’

Speaking to Vanity Fair’s Katie Nicholl, the source revealed: ‘Eugenie knows that a title can be a curse as well as a blessing and she and Jack want their child to live an ordinary life and eventually work to earn a living.’

Sources also revealed the couple will choose an ‘ordinary’ name for their first born.

According to the regulations of the House of Windsor, Eugenie’s baby will not automatically be entitled to the HRH styling, which only extends to grandchildren of the monarch.

The source said even if the Queen offered a title as a gift, it was ‘not Eugenie or Jack’s desire; for their child to have a title.

Despite having royal titles, Princess Eugenie and her sister Princess Beatrice are not currently considered to be senior working royals, because they do not carry out duties full time on behalf of the Queen.

The Duchess of Cambridge’s younger brother James Middleton was among the first to congratulate Eugenie and her husband, a tequila brand ambassador, writing on Instagram: ‘Such wonderful news’.

Sarah Ferguson and Lady Violet Diana Louise Manners both ‘liked’ the post, while Clarence House sent their well-wishes and penned: ‘Congratulations to Her Royal Highness Princess Eugenie and Jack Brooksbank on the birth of their son.’

The Royal National Orthopaedic Hospital (RNOH) charity, which treated Princess Eugenie for the rare condition of scoliosis when she was 12, also wrote: ‘Congratulations to our Patron, HRH Princess Eugenie and Jack Brooksbank on the birth of their baby boy. We are so delighted for you both and would like to wish you all the very best’.

The new baby is 11th in line to the throne behind Prince Charles, Prince William and his children George, Charlotte and Louis, Prince Harry and his son Archie, Prince Andrew, Princess Beatrice and Eugenie. The Queen’s youngest son Prince Edward has been nudged down to 12th.

The Queen could bestow a title on her ninth great-grandchild if desired, but it will not be asked for, sources say.

Speaking to Vanity Fair’s Katie Nicholl, a source  recently revealed: ‘Eugenie knows that a title can be a curse as well as a blessing and she and Jack want their child to live an ordinary life and eventually work to earn a living.’

The new mother is currently on maternity leave from her job as a director at Mayfair art gallery Hausery& Wirth, while Jack works for tequila brand Casamigos.

Earlier this week, the brand was quick to jump on the couple’s baby announcement, sending a press release 11 minutes after the Buckingham Palace missive, asking for reports to namecheck the company.

Casamigos – which was co-founded by Hollywood star George Clooney – sent out a press request that any mention of proud father Mr Brooksbank should include his ‘official title’.

Not a royal title, it must be stressed – he has resolutely stayed a Mr in spite of his marriage to the Queen’s granddaughter.

The statement read: ‘Due to the recent news surrounding the arrival of the Royal Baby from HRH Princess Eugenie and Jack Brooksbank, we wanted to drop you a note to ask if you are to mention any further details about Jack Brooksbank that you use his official title: European Brand Director of Casamigos Tequila.’

The couple moved into the five-bedroom home in Windsor in November after a direct arrangement with the Sussexes.

However, it was reported that just six weeks later, they quit the Grade-II listed house and moved back to Kensington Palace.

It was understood that Eugenie and her cousin Harry reached a ‘private agreement’ over Frogmore Cottage though it is not known how long it will last.

At the time of the move, Harry and Meghan, who currently reside in an £11million mansion in California, said they were ‘delighted’ to ‘open up their home’ while they were in the United States.

Frogmore Cottage was gifted to The Duke and Duchess of Sussex, by the Queen ahead of their wedding in May 2018, and remains their UK residence.

The move to Frogmore Cottage brought the couple closer to the Princess’s parents, who live four miles away at Royal Lodge, Windsor Great Park, and less than a mile from Windsor Castle, where the Queen is spending lockdown with Prince Philip.

Eugenie and Jack had been living at Ivy Cottage at Kensington Palace.