The Queen put on a stylish display as she welcomed billionaire business leaders, presidential envoys and tech entrepreneurs to Windsor Castle for a lavish reception following a Government investment summit on Tuesday.

Her Majesty, 95, who looked effortlessly chic in a matching turquoise co-ord with floral detail, completed her outfit with a pair of trusted patent black shoes and dangling pearl earrings.

Among the guests invited to the Queen’s Berkshire home after the day-long conference in London was Microsoft co-founder Bill Gates, who could be seen leaning forward to shake the monarch’s hand.

The Prince of Wales and the Duke of Cambridge, who were also in attendance, were suited and booted as they met some of the leading figures in the castle’s green drawing room before mingling more widely. 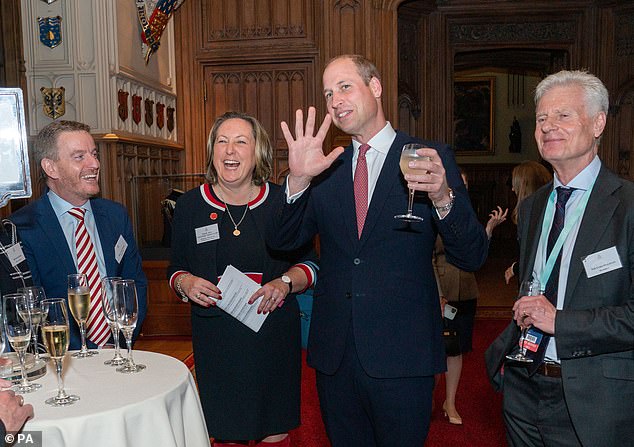 The senior royals were also joined by the Duke and Duchess of Gloucester and the Prince Michael of Kent.

A relaxed-looking Duke of Cambridge, who opted for a navy suit, crisp white shirt and red tie, could be seen with a drink in his hand as he chatted to guests in the sumptuous surroundings of the Castle’s St George’s Hall. 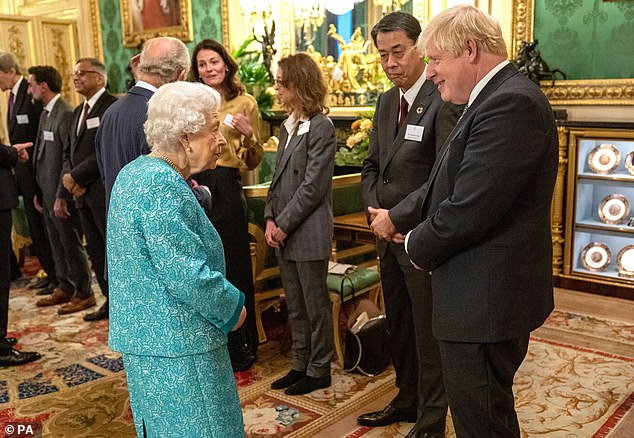 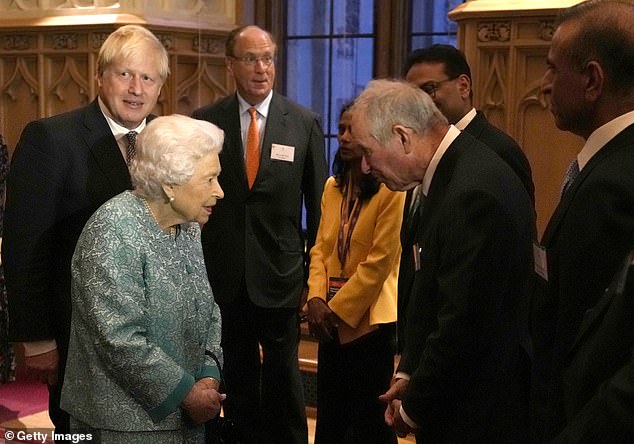 Her Majesty, who looked effortlessly chic in a matching turquoise co-ord with floral detail, greeted guests alongside Boris Johnson 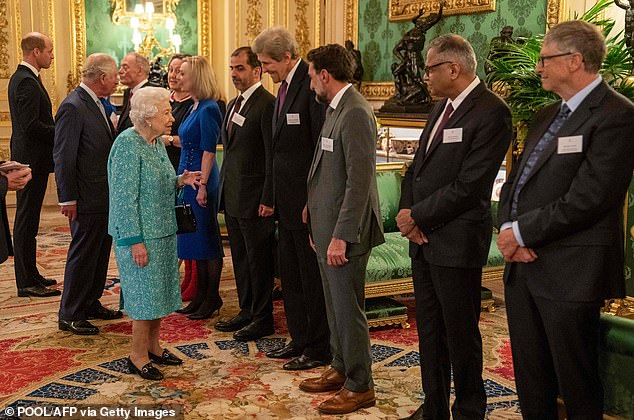 Prime Minister Boris Johnson was due to be introduced first, but he appeared after the Queen began welcoming her guests and took his place at the end of the line.

In a foreword for the Global Investment Summit’s official brochure, the Queen said she was ‘proud’ of how the UK is moving towards a sustainable future but ‘there is still much more to do’.

The head of state also urged nations to ‘rise to the challenge’ and avert the problems associated with climate change. 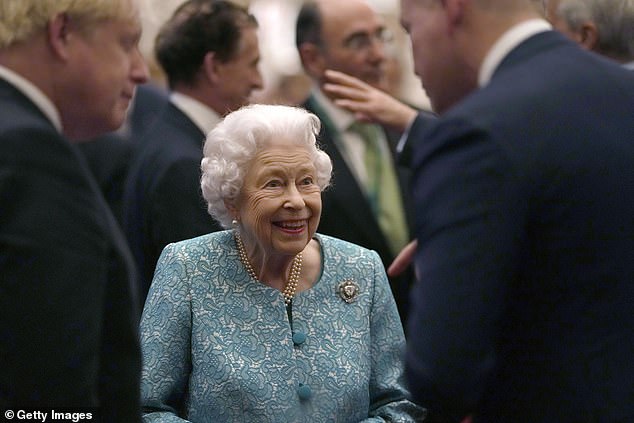 The Queen looked in great spirit during the event as she spoke with the Prime Minister and another guest, pictured 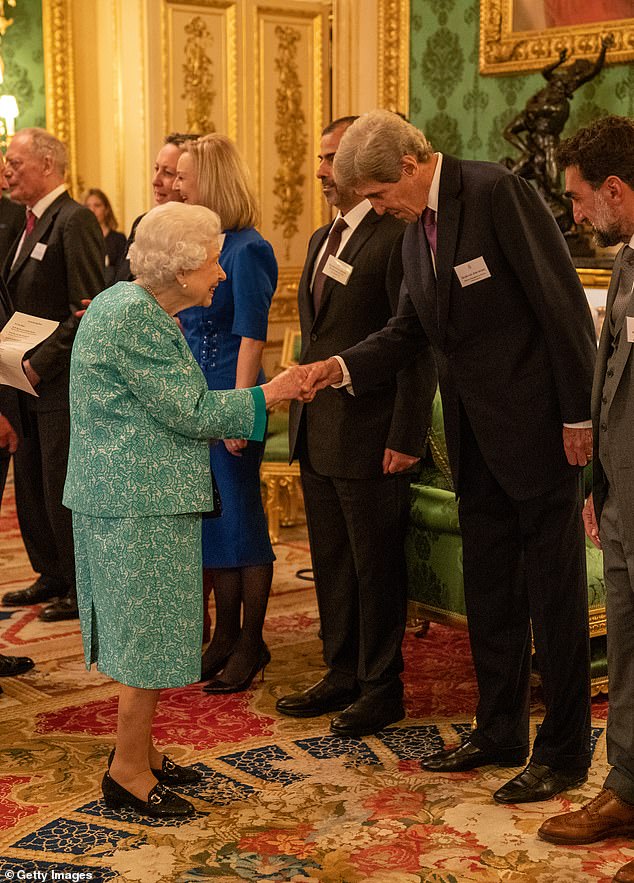 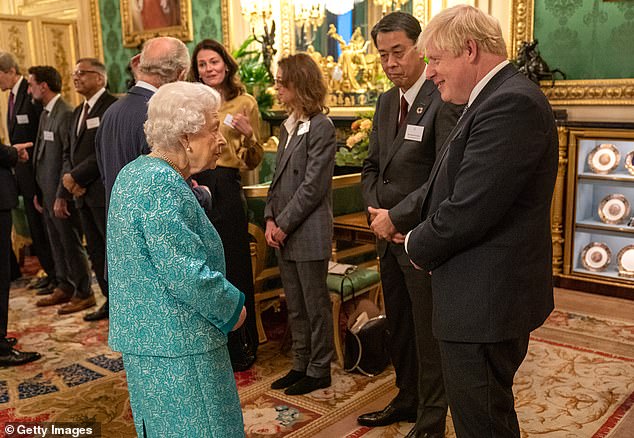 The Prime Minister and the Queen exchanged a few words as she met the reception’s attendees, pictured 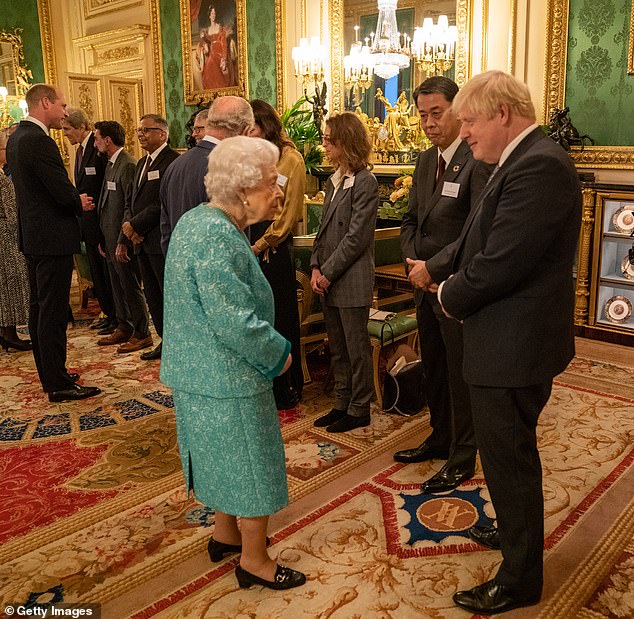 The Queen looked stylish in a beautiful turquoise co-ord suit and black shoes with a sensible heel, pictured 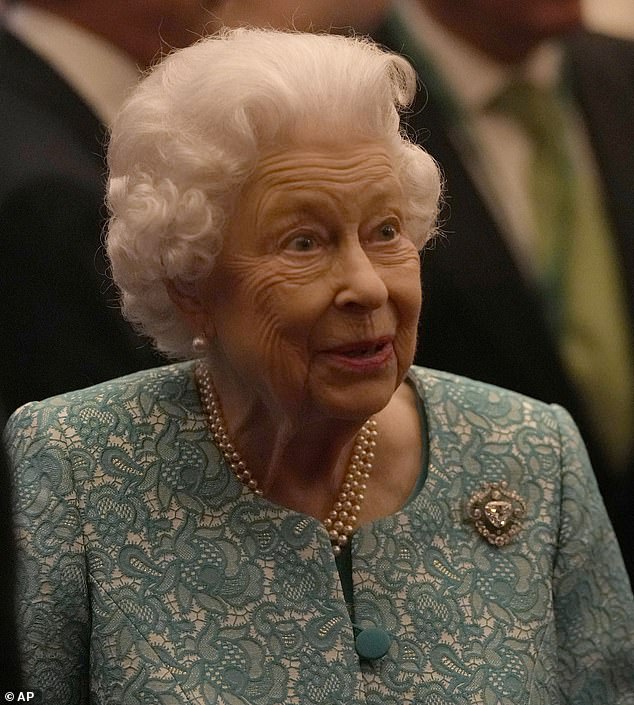 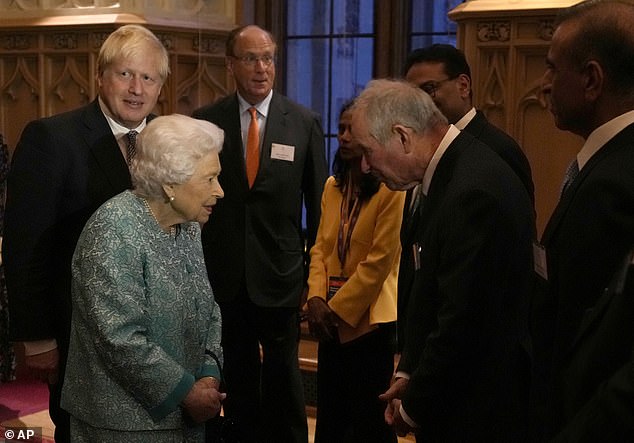 Respectful guests gravitated around the monarch as she greeted each and everyone of them, pictured 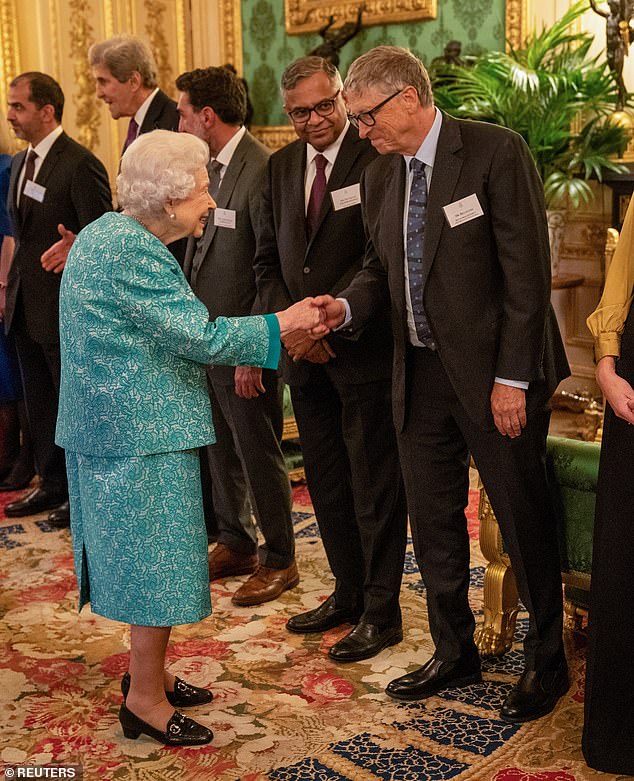 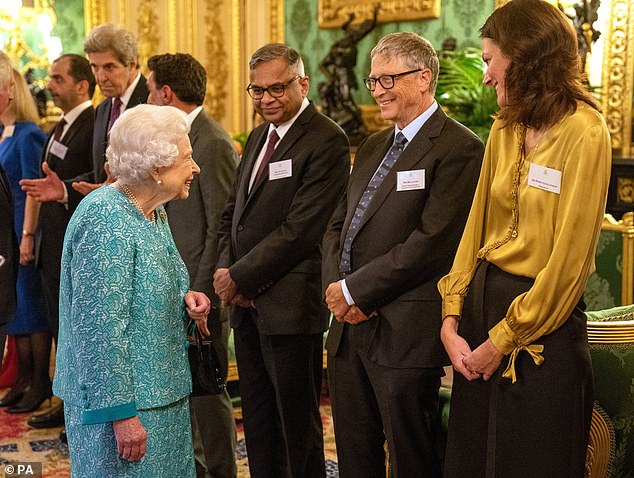 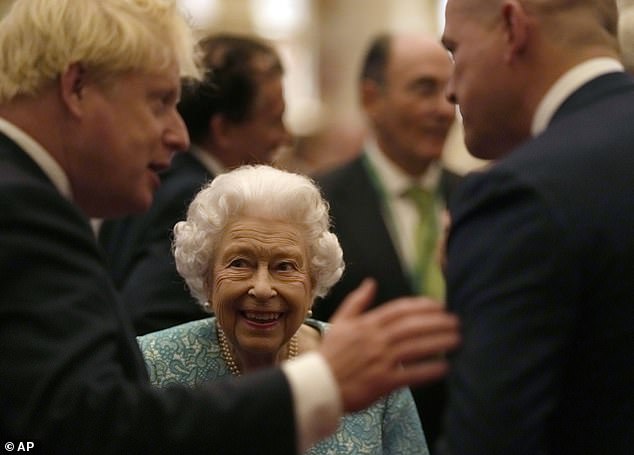 As guests mingled, the Queen seemed in her element and shone thanks to her good spirits, pictured

Her Majesty described how tackling the pandemic had inspired scientific breakthroughs and how innovation in the UK often comes from ‘teamwork against adversity’ like the Second World War efforts of Alan Turing and colleagues in breaking the Nazi regime’s Enigma Code.

She added: ‘The challenge of today, however, is not in breaking a code. It is in working together across the globe to avert the challenges of climate change. It is our shared responsibility, of those in government, business, and civil society, to rise to this challenge.

‘I am proud of how the United Kingdom is seeking to secure a sustainable future, yet there is still much more to do.

‘This summit is not just a showcase, but an opportunity to come together and, in the generous spirit of collaboration, forge new partnerships.’ 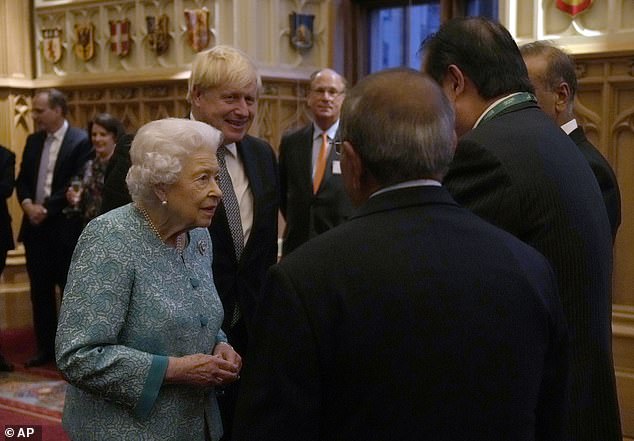 The Monarch listened carefully, learning more about the work her guests do, with Boris Johnson by her side 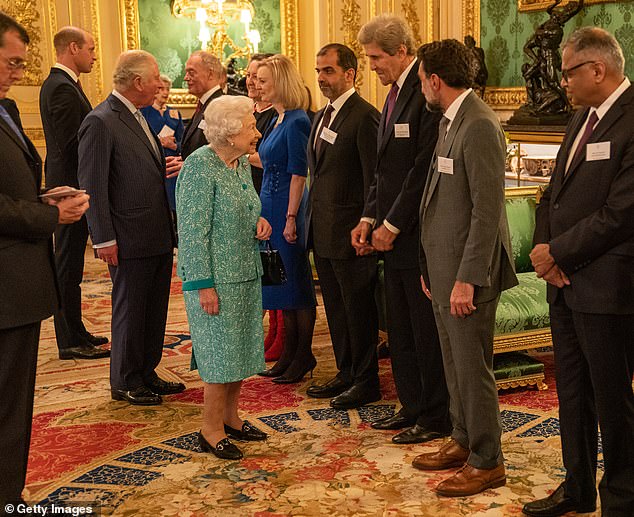 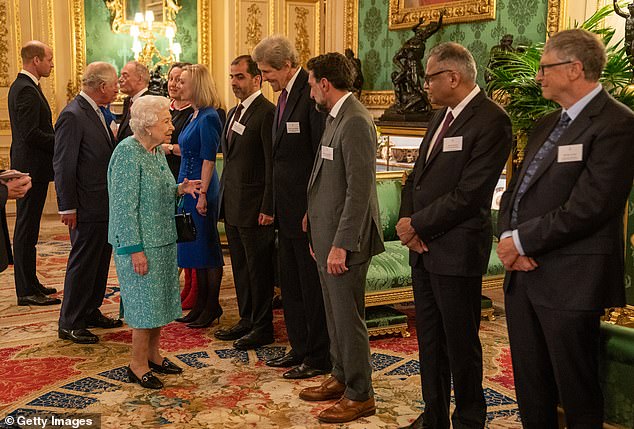 John Kerry seemed delighted to meet the Queen tonight, as other guests, which included Bill Gates, right, watched on 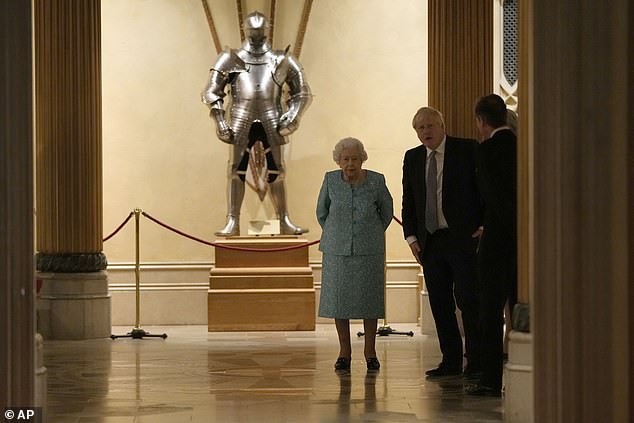 Boris Johnson and the Queen arrived at the reception together, to greet guests at Windsor Castle, pictured 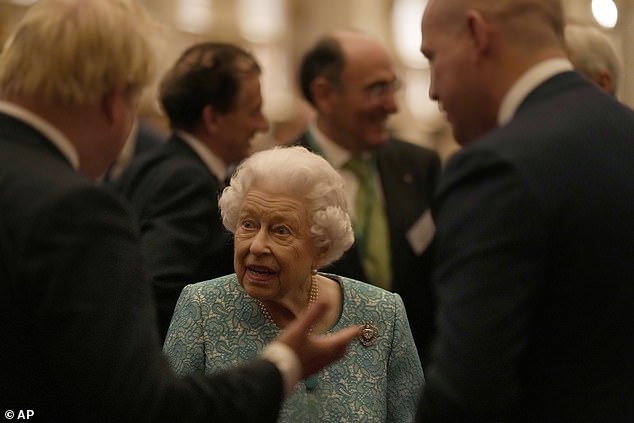 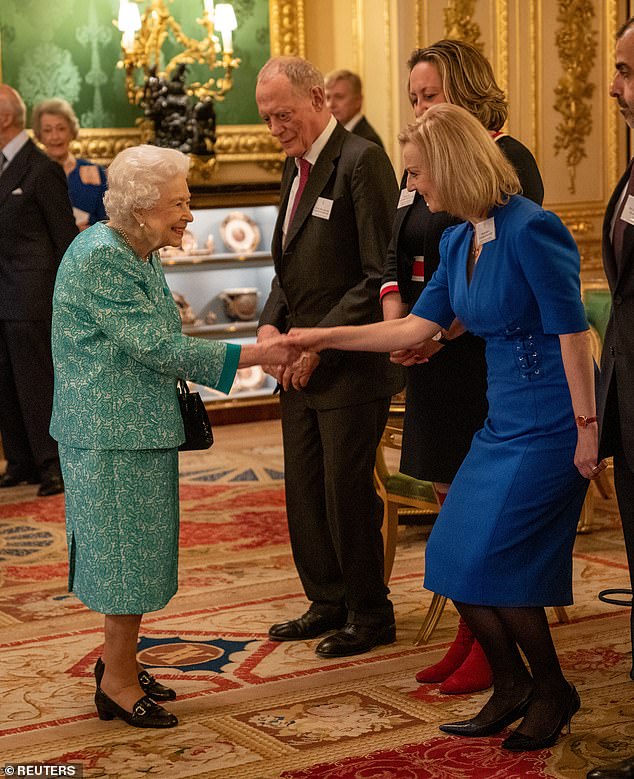 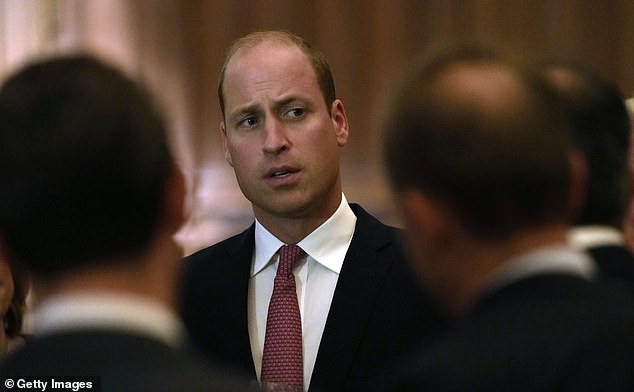 Prince William looked sharp in a black blazer with a crisp white shirt and a dark red tie, pictured