Reverend Kate Bottley has revealed she sometimes goes skinny dipping in her local river early – calling it a ‘type of meditation’.

The Radio 2 star, 46, from North Nottinghamshire, who found fame on Gogglebox, is an advocate of cold water swimming first thing in the morning and regularly shares snaps of her chilly dips on Instagram.

‘If it’s an up-early morning, I’ll drive 10 minutes to my local river for a swim and it sets me up for the day,’ she explained.

‘I have a quick dip in just my swimsuit, and sometimes not even that depending on how busy the road is. It’s a type of meditation for me because I get bored very easily.’ 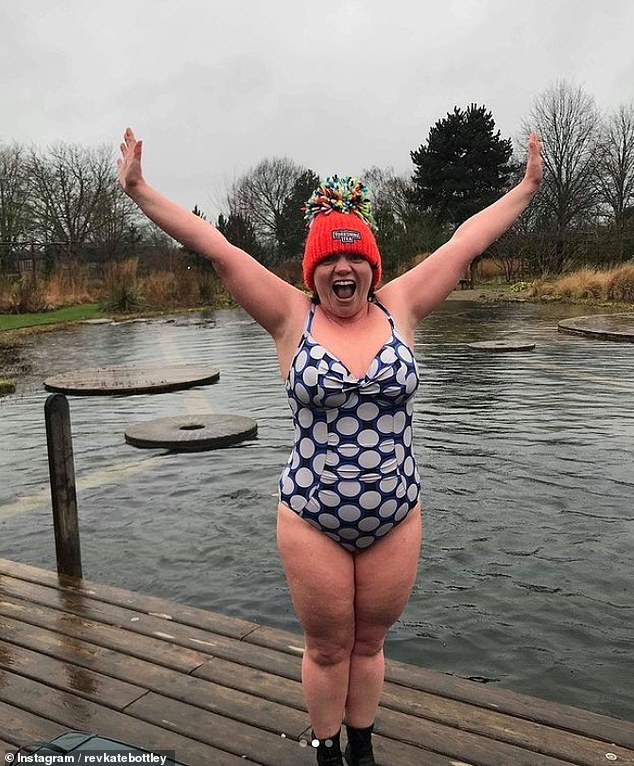 Gogglebox alumna Kate Bottley, 46, from North Nottinghamshire, a self-supporting minister, said she liked to go swimming early in the morning, sometimes without a suit on (pictured after a morning dip)

Kate has spoken of her love of exercise and outdoor swimming in the past, revealing she went from dance classes as a child to playing rugby at university.

Writing for the Telegraph in April 2020, she told how she’d gone for 365 swims in 2019, sometimes swimming as much as five times a day, and lauded its mental health and ‘spiritual’ benefits.

‘Water is a great leveller. When you look at people who swim the Channel, you would not think these people are particularly sporty, but they’re doing these massive endurance, extreme sports,’ she said.

‘Swimming is brilliant for that. With outdoor swimming, the thing that is a disadvantage in other sports is that lovely layer of natural fat is actually a boon in the water. It’s something that’s an asset and it will keep you warmer in the water for longer.’

She explained that the cold water slows her breathing and heart rate down and carries away all her stress and worries. 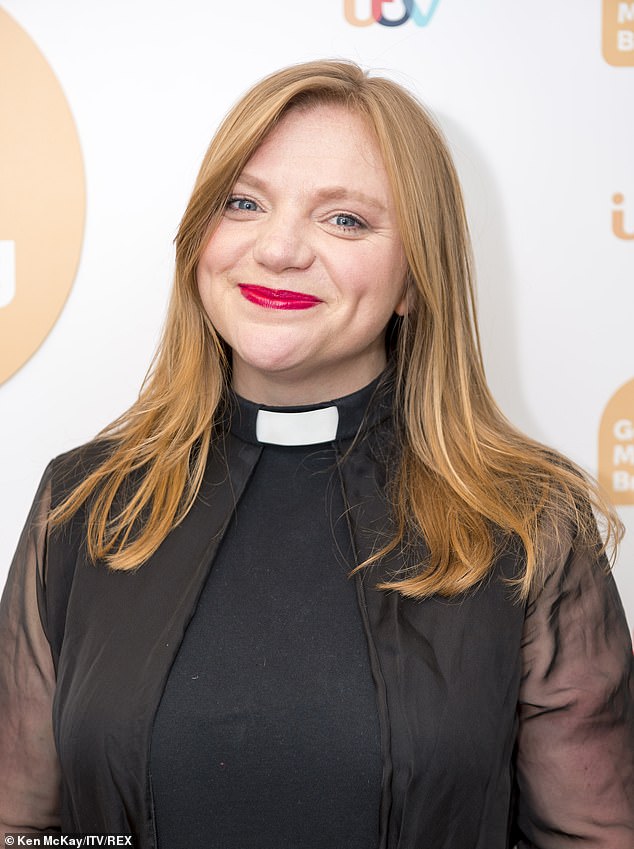 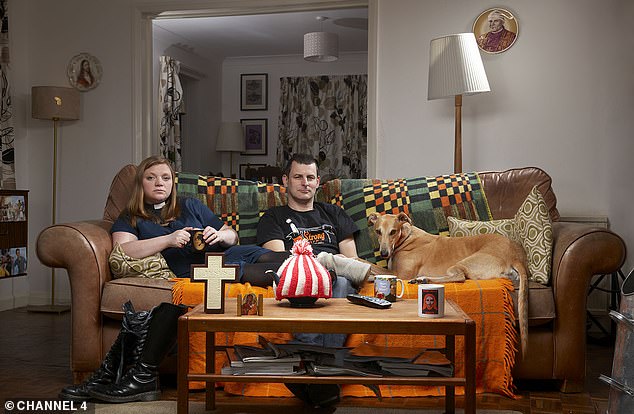 Reverend Kate, who now presents Good Morning Sunday on BBC Radio 2, appeared on Gogglebox with her husband Graham from 2014 to 2016

‘Open-water swimming has a spiritual aspect. I have a natter with friends before, but we’re often silent when we swim. We often joke that while we pull out old bicycles and sinks people have chucked in the river, it carries everything you’ve brought with it. It’s like pressing a reset button at the moment.’

In the Sunday Tines article, mother-of-two Kate described Easter as ‘the bedrock’ of her faith and told how she always gets excited for the occasion, donning Sunday clothes, bunny ears and dispensing Easter eggs to her family.

She stressed she wants people to know it’s possible to be religious and have faith while having fun at the same time, which is partly why she signed up to appear on Gogglebox in 2014.

‘My media work is part of my ministry, as I want to keep the door open for people,’ Kate explained. 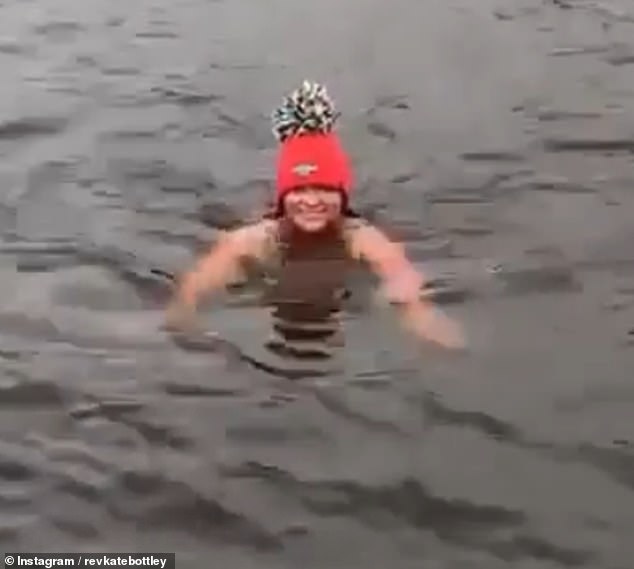 Reverend Kate in the water. The mother-of-two said she tries to be in bed by 10pm every day but either wakes at 6am or lunchtime 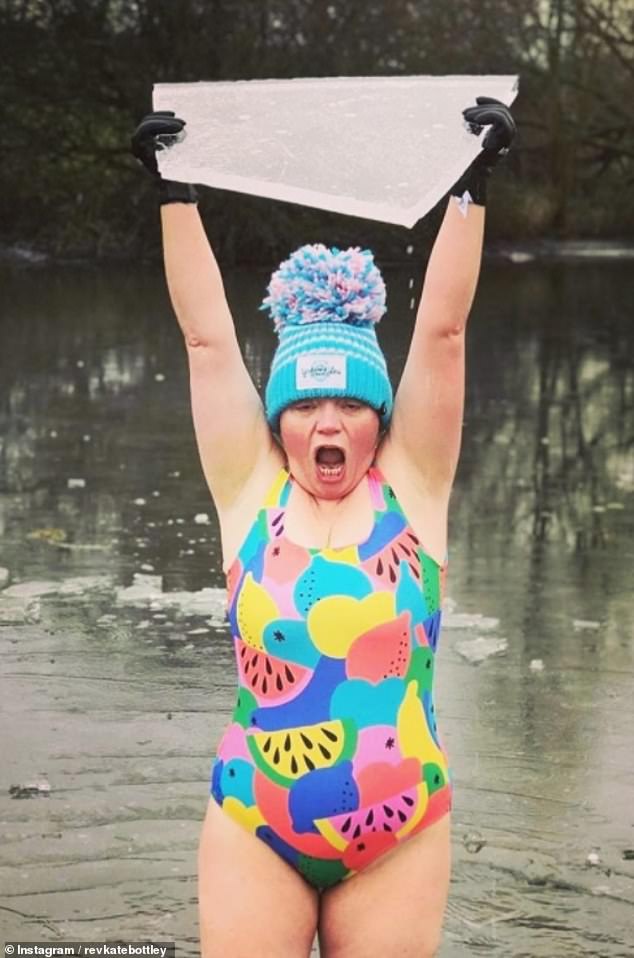 Reverend Kate after an icy swim over Winter. She explained in 2020 that she swam up to five times a day in 2019

‘That motivated me to say yes to Gogglebox but I’m a desperate show-off too. People might look at me on TV and think it’s not proper behaviour for a vicar but what matters to me is what I think and what my gaffer thinks.

‘One of my favourite Bible passages is where Jesus says: “I’ve come that they might have life and have it in all its fullness.” I’m interested in that fullness of life.’

Kate and husband Graham left the Channel 4 show in 2016 and she has since moved into radio, presenting Good Morning Sunday on BBC Radio 2.

During lockdown she told how she and her family are trying their best to make the best of it by having a sit-down dinner every evening before watching TV together – adding the family are passionate about quiz shows – before bedtime at 10pm.

Kate said she believed that there were three things people should aim for in life, regardless of their theology or philosophy.

She has also attended online religious services around the world, from New York to the Vatican, and added that as a self-supporting minister, she doesn’t have a regular Sunday service but covers for other vicars and helps with weddings of funerals.