‘Take us back to Benidorm!’: Budget holidaymakers regret swapping their £280 package trip for a £15,000 luxury jaunt to St Lucia – branding it ‘boring’ and ‘lonely’ on Rich Holiday Poor Holiday

A group of friends who save up all year for a boozy holiday in Benidorm have revealed their regret after swapping holidays with three wealthy retired women, deeming the £15K luxury trip to St Lucia ‘boring’ and ‘lonely’.

Friends Sally-Anne, Antia, Lisa and Lisa, from Kentish Town, London, are swept away to St Lucia for an all-inclusive, secluded £15,000 luxury getaway on tonight’s Rich Holiday, Poor Holiday  on Channel 5.

The gang swap holidays with wealthy retirees Jackie, Louise and Pat from Guildford, who would normally opt for a luxury Caribbean break but will instead be heading to a £280 package holiday in Benidorm, with a daily budget of £40 for food and activities.

However, despite of all the glitz and glamour all-inclusive holiday, the Kentish Town dwellers are left begging to be taken back to Benidorm after the pampering holiday leaves them ‘bored’  and ‘lonely’. 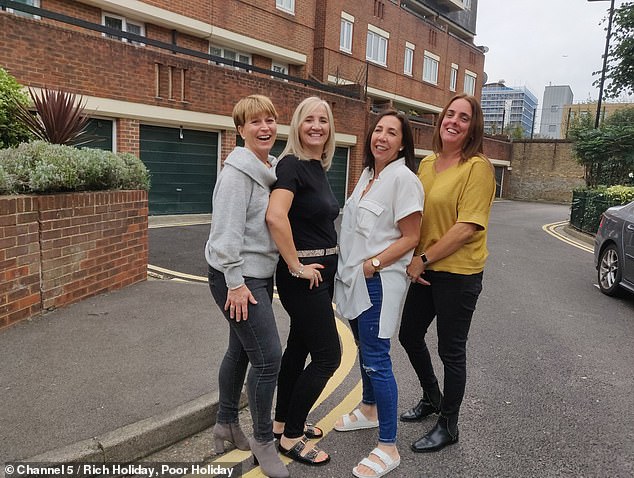 From left to right: Lisa, Sally-Anne, Antia and Lisa, from Kentish Town, London, are treated to a £15,000 holiday in St Lucia in tonight’s Rich holiday, Poor Holiday on Channel 5 at 9pm

Party-loving Sally-Anne,  a cab driver, her sister Antia, a clothing store worker, her sister-in-law Lisa, a childminder, and another friend also called Lisa, a prison officer, save hard every year to book a package holiday.

Lisa explains: ‘I practically save all year round and pay it off normally, monthly.’

The group say they love to party and often go for package deals to destinations like Benidorm.

Meanwhile Jackie, Louise and Pat say they treat themselves to luxury hotels and exotic locations away from other tourists. 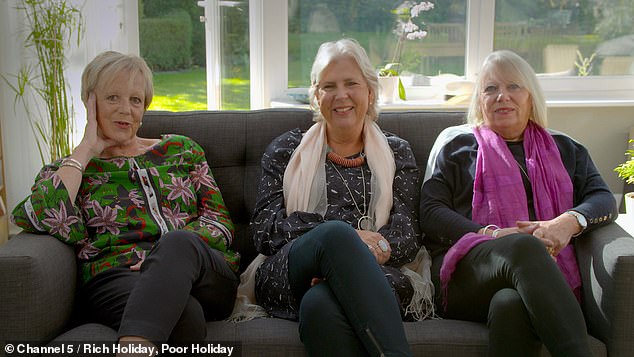 They swap holidays with wealthy retirees Pat, Jackie and Louise, from Guildford, who go on a £280 packaged holiday to Benidorm in Spain

Jackie explains: ‘My idea of hell is a tourist spot, that does not appeal to me. A coach trip would be awful. I don’t want to go on holiday where there’s hundreds of pubs and things’.

And after the gang arrive in Benidorm, they’re left unimpressed with their ‘grotty’ apartment for the week, which is located on the eighth floor of an apartment complex.

Meanwhile, Sally-Anne, Antia, and both Lisas enthusiastically sip on cocktails as they are welcomed in their St Lucia hotel, where they will be staying in bungalows overlooking the sea.

As the women walk along the shore, Sally-Anne is blown away by the view, saying: ‘What a place to be.’ 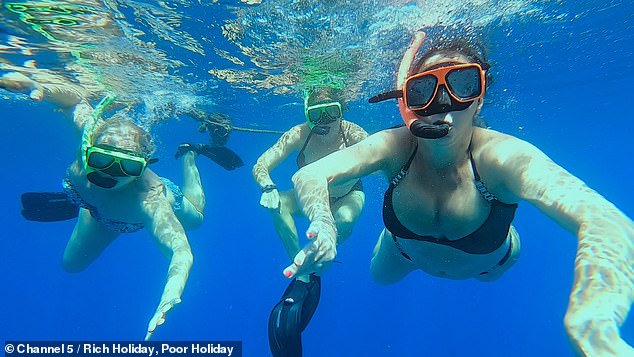 In St Lucia, the Londoners go snorkeling in paradise on their first day after renting a private catamaran (pictured)

During the week, both groups will go on activities their counterparts would have been likely to undertake.

For the Guildford clan, this includes a ‘worrying’ free dance class on the beach and a coach trip out of town.

The first evening sees them going out on the Benidorm street to ‘enjoy’ the nightlife, starting with a meal of fish and chips.

However, the ladies are unimpressed with the hordes of British tourists partying in the streets.

Pat exclaims: ‘There are a lot of people around, some of them pretty drunk by now and it’s only 9 o’clock.’

And it’s not long before the ladies decide to give up on their wild night out in Benidorm, with Pat explaining: ‘We’ve seen everything going on in Benidorm this evening and I think we’re ready to call it quits.’ 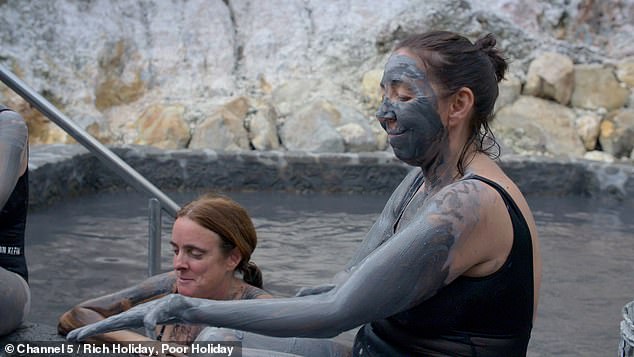 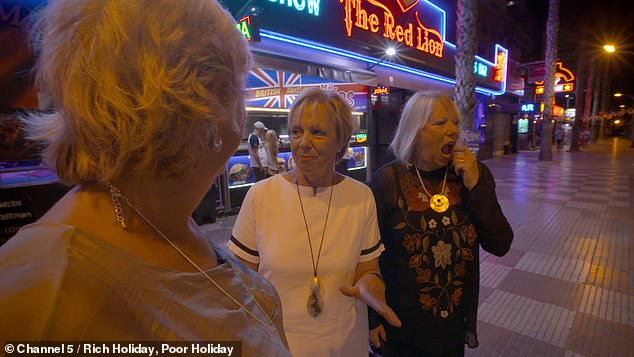 On their first night in Bernidorm, the Guildford trio cannot handle the party culture of the Benidorm strip, and call it an early night

Meanwhile in St Lucia, Sally-Anne and the gang are treated to a fire-breathing show and a limbo dancing competition.

On the second day in Benidorm, it’s a rude awakening for Jackie, Pat and Louise, who are not used to sharing rooms and have kept each other awake all night with their snoring.

Jackie says: ‘The evening was quite unusual, my bed wasn’t soft, my bed was hard.’ 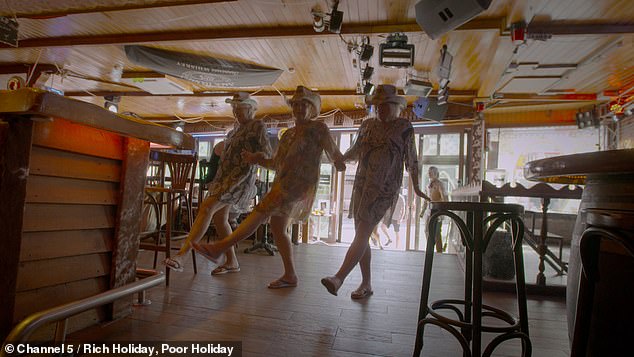 Meanwhile Jackie, Pat and Louise end up enjoying some of the Benidorm customs and treat themselves to some improvised line dancing (pictured)

Once breakfast over, it’s time to hit the beach, but the three friends are unhappy to see how packed the sea side of Benidorm can be.

Jackie despairs: ‘I like water that you can see your toes in and no people.’

Later they embark on the much dreaded coach trip out of town, which leaves them exhausted.

While Jackie says the experience is her ‘nightmare on Earth’, Pat admits: ‘It’s just a different society than we would normally be rubbing along with, I suppose.’

After a busy day, the trio opt to avoid the Benidorm strip and decide to stay at home and have a supermarket feast with £2.99 wine instead.

As the Guildford ladies finally get into the swing of Benidorm with a dance class on the beach, mobility scooter cruise and some extravagant cocktails, the Londoners are growing more bored by the second, as their relaxing trip to the Caribbeans is not to their taste. 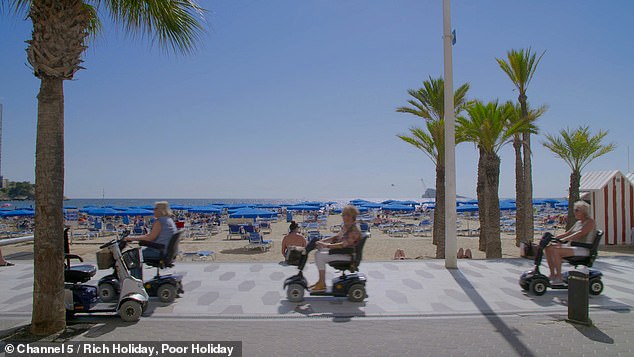 Meanwhile in St Lucia, the London friends are cruising to a private beach in a rented catamaran.

Later, they learn dance moves from two locals, but despair over the lack of party in the resort and instead, have dinner at the hotel.

The lack of company and party sends Lisa into despair, as she complains: ‘It’s so boring, how can you be the only one in the restaurant?’

She adds: ‘Take me back to Benidorm,’ as Sally-Anne, the other Lisa and Antia burst out laughing.

The foursome go to a volcanic spa to enjoy a mud bath which fails to impress, and a hike that leads to a beautiful view.

At the end of the experience, the glitz and glamour of ‘lonely’ St Lucia leaves the Kentish Town four cold.