RICHARD LITTLEJOHN: Cycling sessions on the NHS? On yer bike!

RICHARD LITTLEJOHN: Cycling sessions on the NHS? On yer bike!

The late, great comic Les Dawson had a routine about his wife’s mother: ‘I wouldn’t say she’s a big woman, but she gets her knickers on prescription.’

It never failed to raise a laugh. The mother-in-law gag was the stock-in-trade of Northern comedians.

But what gave this joke a clever twist was the preposterous idea that the National Health Service was handing out extra-large undercrackers to ladies of a certain size.

Back in the Eighties, when Les was at the height of his powers, it was still permissible to laugh at obesity, mothers-in-law and, indeed, the NHS. 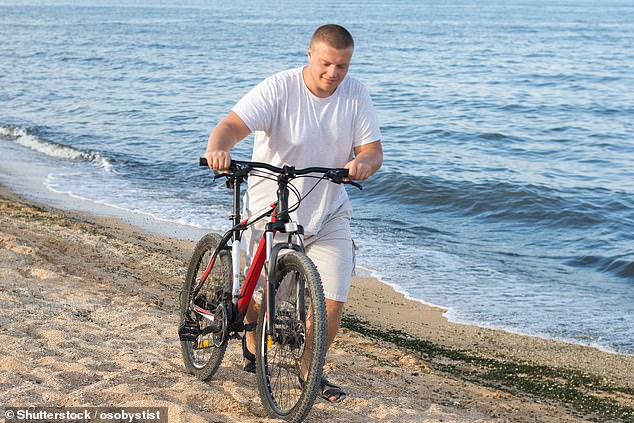 Look, I can understand why the NHS is desperately searching for any solution to the mounting health problems caused by gluttony and lack of exercise. Hospital admissions for obesity-related conditions soared by 100,000 last year to almost three-quarters of a million [File photo]

These days, poking fun at fat people is considered a ‘hate crime’, mocking mothers-in-law is sexist and ridiculing the NHS is akin to blasphemy. What would once have been considered a joke is now beyond parody.

Imagine if Les Dawson’s routine had gone something like this: ‘My mother-in-law is so fat, she went to the doctor for help. He gave her a bike.’

The audience would have been baffled for a split second, followed by a few polite chuckles. But most of them would have wondered what the ruddy heck he was going on about.

Knickers on prescription were one thing, conceivable even. At a stretch, so to speak — given that doctors were already supplying free rubber incontinence pants.

But what’s funny about the NHS giving away bikes? That was never going to happen.

Not when Les Dawson was treading the boards, certainly. But fast-forward three decades and the latest NHS initiative to tackle obesity is free bike rental.

As part of a pilot scheme aimed at reducing heart disease, GPs in Cardiff are prescribing overweight patients 30-minute cycling sessions for six months to encourage them to take more exercise. 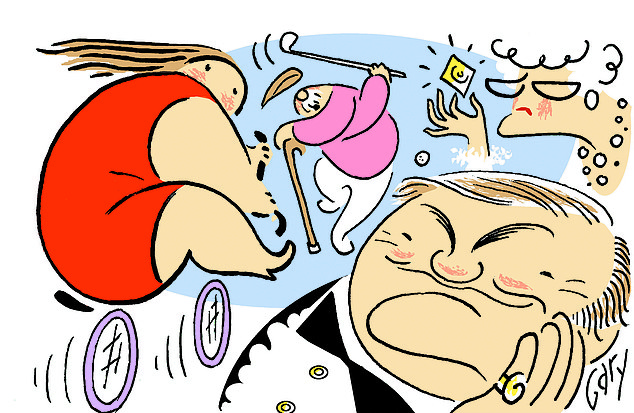 These days, poking fun at fat people is considered a ‘hate crime’, mocking mothers-in-law is sexist and ridiculing the NHS is akin to blasphemy

If successful, the programme, which is being run in partnership with a bike-share company, could be expanded to other cities, including Belfast, Glasgow, Bath and Milton Keynes.

Dr Tom Porter, a consultant with Cardiff and Vale University Health Board, said regular cycling could cut deaths from heart disease by half. Not only that, but it would help the polar bears, too, by reducing carbon emissions.

That’s the theory, anyway. But I can imagine how, far from easing the burden on the NHS, this could backfire and end up filling A&E wards with morbidly obese individuals suffering from serious injuries as a result of multiple-bike pile-ups.

I have visions of XXXL-sized punters wobbling their way to disaster, accidents waiting to happen, like circus elephants on unicycles. Surely if fat people wanted to ride bikes, they’d be doing so already. After all, they’ve been given enough incentive.

London and our other big cities are littered with expensively installed cycle lanes. But apart from the usual assortment of Lycra louts, very few folk seem inclined to use them. Most bike lanes are deserted 95 per cent of the time, outside rush hour.

Women, in particular, prefer other forms of transport. That would help explain why women who live in cities, where there are cycle lanes in abundance, tend to be fatter than those who live in the countryside.

Look, I can understand why the NHS is desperately searching for any solution to the mounting health problems caused by gluttony and lack of exercise.

Hospital admissions for obesity-related conditions soared by 100,000 last year to almost three-quarters of a million.

Those are beds which could be used to treat people who are sick through no fault of their own — not because of their inability to stop stuffing their faces with junk food and sugary drinks.

I sympathise with Tam Fry, from the National Obesity Forum, who said: ‘These figures are truly depressing. A significant number of patients are jamming up hospital beds just because they are fat.’ 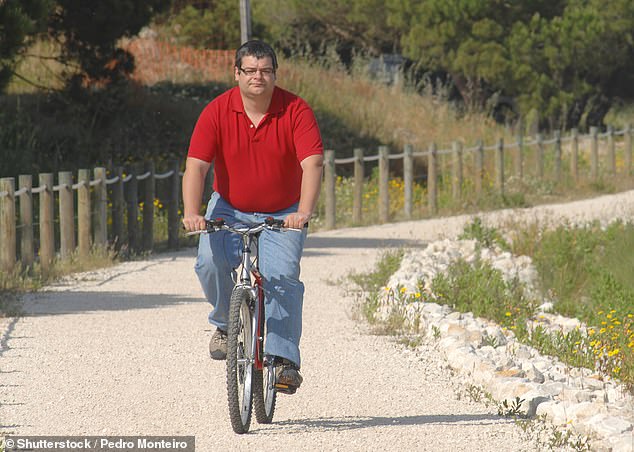 As part of a pilot scheme aimed at reducing heart disease, GPs in Cardiff are prescribing overweight patients 30-minute cycling sessions for six months to encourage them to take more exercise [File photo]

But instead of resorting to gimmicks, surely it would be more effective to tell patients suffering from self-inflicted diseases that they will have to pay for at least part of their treatment.

But because the NHS is the nearest thing we’ve got to a national religion, no one is prepared to grasp that particular nettle. So we are told the only answer is to keep pouring in more money and treating patients like children who can’t be held responsible for their own actions.

Despite health service ‘professionals’ constantly pleading poverty, there’s never any shortage of cash when it comes to launching yet another daft initiative.

This year alone, I’ve brought you news of a scheme to provide golf lessons on the NHS. The idea is that middle-aged men will be nudged into taking more exercise and reduce their dependence on expensive drugs.

Meanwhile the NHS is also hiring 1,000 ‘social prescribers’ — on £25,000 a year — to improve the ‘mental health’ of up to a million people by referring them to dance classes and painting lessons.

I thought I’d heard it all when a clinic in Scotland started handing out herrings to people with heart problems, on the grounds that oily fish is as effective as medicine in treating cardiac complaints.

Then, in March, along came our old friends at Public Health England backing a scheme to distribute free condoms at food banks to ‘Silver Singles’ — part of a masterplan to combat an increase in sexually transmitted diseases among the over-60s.

Quite whether the fat-bottomed girls of Cardiff will be queueing up to take advantage of this generous offer, though, remains to be seen. It would probably work out cheaper to give them their knickers on prescription.

Who ate all the cat food?

It’s not only humans facing an obesity crisis — hedgehogs are piling on the pounds, too. 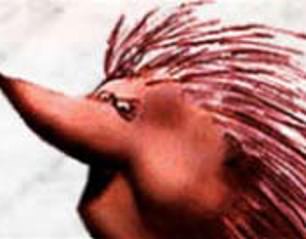 It’s not only humans facing an obesity crisis — hedgehogs are piling on the pounds, too

Semi-detached suburban Mr and Mrs James are engaged in a ‘competitive feeding’ frenzy to attract the spikey animals into their gardens.

According to Anne Brummer, from a hedgehog rescue centre: ‘People want to tempt them away from their neighbours, so they overfeed them.’

Some people are putting out cat food and dog biscuits, leading to hedgehogs spurning their traditional balanced diet of slugs and insects.

At this rate, it can only be a matter of time before giant hedgehogs start terrorising entire neighbourhoods — like Spiny Norman, the imaginary companion of Dinsdale Piranha, one half of Monty Python’s gangster Piranha Brothers.

Miss Brummer said the hedgehogs find fattening food irresistible. ‘They tend to be exactly what the name says. They live in hedges and eat like hogs.’ Dinsdale!

But if that’s really the case, why are so many councils like Sheffield, who claim to care passionately about the environment, cutting down thousands of healthy trees in the name of elf’n’safety?

It’s as much a Bank Holiday tradition as dancing round the Maypole and hailstorms.

Right on cue, members of the ‘travelling community’ move on to unspoilt farmland and set up an illegal camp.

At the weekend, it was the turn of the Hertfordshire village of Little Hadham to be on the receiving end. 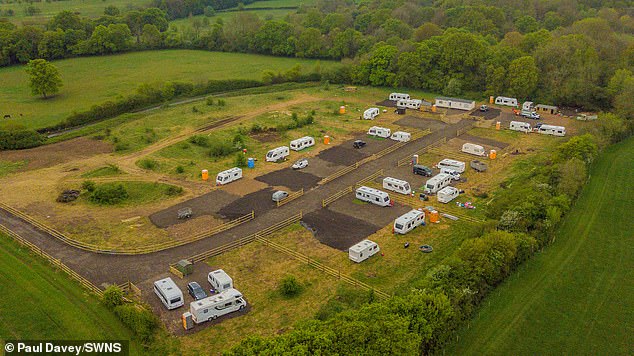 Right on cue, members of the ‘travelling community’ move on to unspoilt farmland and set up an illegal camp

About 100 travellers moved in over Easter and used this Bank Holiday to start laying hardstanding and foundations for a permanent settlement.

House values in the area have already plummeted, as the newcomers dig in for the duration. ‘We are not going anywhere, we are here for ever,’ one of them told Mail Online.

They have bought the land, but are building on it illegally, without planning permission. Yet don’t expect the authorities to do much about it in a hurry.

The poor folk of Little Hadham are in for a long war. Expect a re-run of the ten-year occupation of Dale Farm in Essex.

Householders across Britain have learned to their cost that abiding by the law and paying your taxes affords you fewer ‘rights’ than so-called travellers, who rarely do either, let alone actually travel anywhere.

A Met police officer who knocked a handbag thief off his moped has been cleared of dangerous misconduct, but only after a hellish two-year ordeal.

PC Edwin Sutton, now due to retire after 30 years’ service, didn’t deserve a disciplinary charge. He deserved a Commissioner’s Commendation.