Home » Lifestyle » RICHARD LITTLEJOHN: It was fun while it lasted but the party's over

RICHARD LITTLEJOHN: It was fun while it lasted but the party’s over – now let’s get back to work

Well, that was fun while it lasted. But the party’s over. If you thought the hangover from England’s defeat by Italy was bad enough, you ain’t seen nothing yet.

Sore heads are going to be the least of our problems unless the economy opens up fully without further delay.

Now that Covid restrictions are being lifted from next Monday, the age of indolence has to end. OK, so the Government is urging caution. Lockdown is being lifted, if only half-heartedly. The siren voices of ‘the science’ are still chanting their mantras of doom. 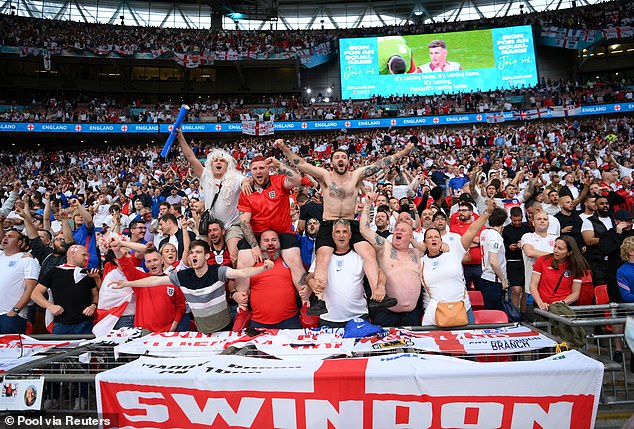 Boris likes to play the benevolent uncle. He was even toying with creating another bank holiday had England actually won Euro 2020

But we can’t go on cowering from coronavirus indefinitely, just to be on the safe side. Even though the ‘experts’ continue to attempt to bamboozle and frighten us, the truth is that Covid is under control, thanks to our spectacularly successful vaccination programme.

As the Prime Minister says, we are going to have to learn to live with it.

There can be no more excuses for perpetuating the ‘working from home’ fantasy. WFH was meant to be a temporary expedient, not a way of life.

And as I wrote here a year ago, one man’s WFH is another man’s P45.

Our city centres are dying. The hospitality industry is on its knees. Small businesses such as sandwich bars, which rely on office trade, have gone bust. The commercial tax base, which pays for essential public services, is shrinking.

Unless there is a rapid return to work as we knew it in February 2020, an unemployment timebomb is about to explode — especially once furlough ends.

The smug WFH brigade who — to quote the former Tory PM Harold Macmillan in another context — think they have never had it so good are in for a rude awakening. For the past 16 months they’ve enjoyed a comfortable lifestyle, sitting at home with their families, watching their bank balances increase impressively, thanks to the savings they have made on everything from commuting to dry cleaning.

Furthermore, we now learn that 800,000 people WFH have been able to claim tax relief to cover increased household expenses — all those extra packets of Hobnobs, presumably.

No wonder they want it to last for ever and have come to look upon it as an entitlement. But the day of reckoning is coming.

Employers are waking up to the fact that they’re not getting the full bang for their buck. In the U.S., the boss of the Morgan Stanley banking conglomerate has told his staff to return to the office, or face salary cuts.

James Gorman said: ‘If you want to get paid New York rates, you work in New York. None of this, “I’m in Colorado and I’m getting paid like I’m sitting in New York City”. Make no mistake about it. We do our work inside Morgan Stanley offices, and that’s where we teach, that’s where our interns learn, that’s how we develop people. If you can go into a restaurant in New York City, you can come into the office.’

If you want to get paid London wages, go to work in London. Why should employees expect top whack for sitting in their back gardens in Canterbury, tapping away on their laptops while keeping one eye on the tennis at Wimbledon.

People may claim to be in mortal danger from Covid, but that hasn’t stopped them turning out en masse at Wembley, or at Euro 2020 fanparks, or at Jeremy Clarkson’s farm shop.

Or heading for the beach every time the sun shines. ‘If anybody wants me, I’ll be working from Durdle Door again this week.’

That Morgan Stanley message is starting to get through here in Britain, too. Chancellor Rishi Sunak is urging people back to work as soon as possible. He knows the Money For Nothing And Your Chips For Free culture he helped create can’t go on indefinitely. The country is £300 billion in debt, mortgaged up to the hilt. That will have to be repaid.

Those who think the Government is wrong to lift restrictions now are living in cloud cuckoo land. But how many of the alleged 50 per cent who say they are still scared of Covid have simply got used to the good life and don’t want to give it up?

Employment lawyers are salivating at the prospect of bulging briefs, courtesy of cases brought against employers who insist on staff returning to work.

And if the militant unions have their way, no one would ever go to work, or school, again. Idleness has become institutionalised.

Fortunately, employees are beginning to get the message, too. One of the daft ideas floated in lockdown was that the whole country should go on a permanent four-day week, to cut carbon emissions and boost mental health. No one explained how that utopian scheme was going to be funded.

Now, though, a new survey has revealed that three-quarters of workers would reject a four-day week if it meant lower salaries. The prospect of a pay cut does tend to concentrate the mind. 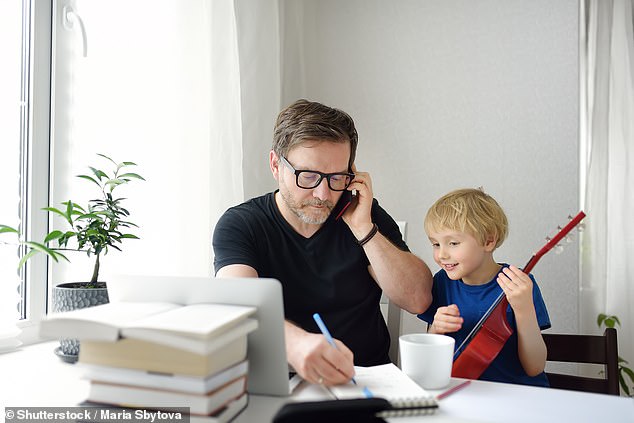 Unless there is a rapid return to work as we knew it in February 2020, an unemployment timebomb is about to explode — especially once furlough ends

So it’s fair to assume that the insistence on WFH for ever wouldn’t be as entrenched as it appears if more firms adopt the hardline Morgan Stanley approach. Government has to take the lead and set an example for the private sector to follow by insisting that civil servants return to work immediately.

Boris’s former chief of staff Eddie Lister says it is imperative that Whitehall gets back to normal straight away.

Ministers are lifting the official ‘work from home’ guidance from next week, but that doesn’t go far enough. Employers should be given the legal right to sack anyone who refuses to return to the office without a genuine, cast-iron medical reason.

Boris likes to play the benevolent uncle. He was even toying with creating another bank holiday had England actually won Euro 2020. That would have been the last thing we needed. Half the country has been on holiday for the past 16 months.

The party’s over. Britain must get back to work.

Thanks to all of you who have written to say that Chris Farlowe’s Out Of Time was No 1 on the day England won the World Cup in July 1966, not Sunny Afternoon. In some charts, yes. In others, no. The music industry, the NME, the pirate radio stations all had their own Top 20s. The Kinks were certainly No 1 when the tournament kicked off. For the record, Out Of Time is one of my all-time favourite singles. But whoever was top of the pops on the day, the summer of ’66 will always be one endless Sunny Afternoon.

Just a thought, but now that Richard Branson has returned to Earth from outer space, does he have to spend ten days self-isolating in a hotel room?

Shiver me timbers! I dodged the hop op 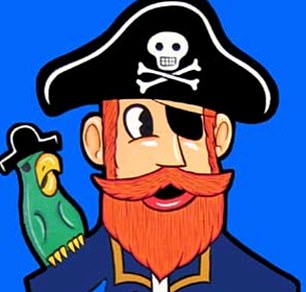 In some circumstances, surgery can do more harm than good. So it’s lucky he recommended I stuck to physio and strength training

Hip and knee ops are no more effective than physiotherapy and medication, according to a new study. That’s a relief.

I have been recovering from a gammy leg since last September.

Fortunately, my consultant doesn’t believe in putting patients under the knife unnecessarily.

In some circumstances, surgery can do more harm than good. So it’s lucky he recommended I stuck to physio and strength training.

Otherwise, never mind Littlejohn, I could be the full Long John Silver by now.

A paramedic who called a colleague a ‘fat porker’ and offered to buy her a bigger pair of trousers has escaped the sack.

Paul Winfield, who works for the East Midlands Ambulance Service, told the woman she needed to lose weight. ‘Look at the (expletive-deleted) state of you!’

Winfield was suspended, but a tribunal decided that rather than lose his job he should be sent for equality and diversity training. 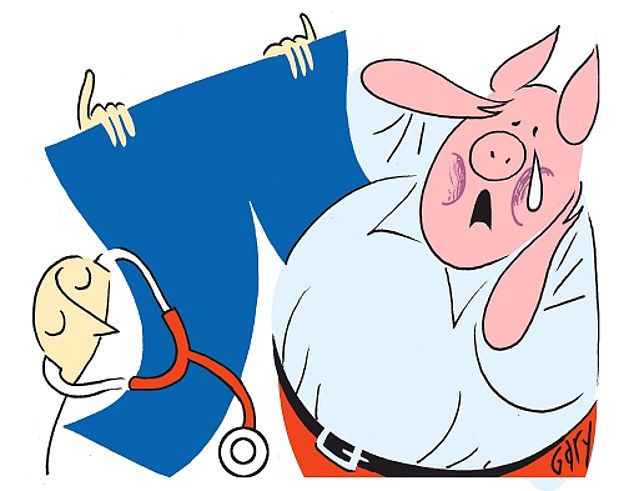 Paul Winfield, who works for the East Midlands Ambulance Service, told the woman she needed to lose weight. ‘Look at the (expletive-deleted) state of you!’

His remarks were hurtful and ungallant, to say the least. But there may have been some truth behind his cruelty. Britain is in the grip of an obesity crisis, which costs the NHS billions. Yet there are plenty of plus-sized personnel working for the health service. What kind of example do XXXL nurses and paramedics set?

Perhaps it would be more effective if doctors started telling their patients they were ‘fat porkers’ and offering them bigger trousers on prescription. Sometimes people have to be shamed into changing their eating habits, if only for their own good.