RICHARD LITTLEJOHN: How dare companies tell their customers what to think or they can get lost? Woke Halifax should wake up and Bring Back Howard!

Remember Howard? He was the bank clerk from Birmingham who shot to fame as the public face of the Halifax between 2000 and 2008.

Howard became a national celebrity, starred in a series of popular television commercials, recorded a hit single and was handed a walk-on part in The Office, alongside Ricky Gervais.

(He even turned up on one of my old TV shows, which was probably the nadir of his career.)

What was unusual at the time was that Howard Brown, of Barbadian heritage, was one of the very few black faces featured in any high-profile advertising campaign.

Britain was a different country 20-odd years ago. Racism was far more prevalent than it is today. Yet the nation took Howard to its heart. He successfully raised the profile and profits of the Halifax, a former building society founded in 1853.

Maybe there were a few neanderthals who objected to a black man fronting a TV commercial. But somehow I can’t imagine the Halifax telling customers who didn’t like Howard to take their overdrafts elsewhere. 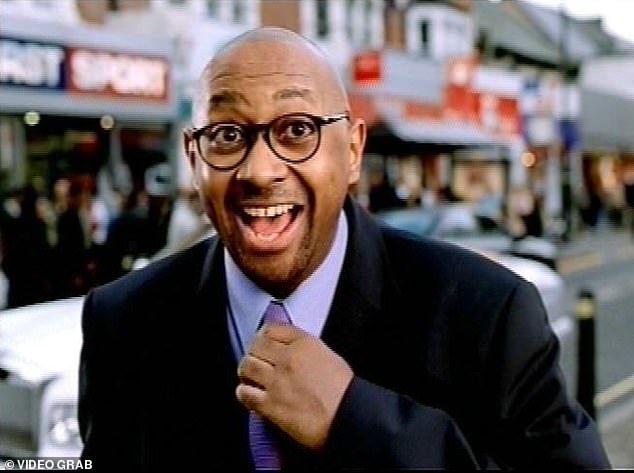 Maybe there were a few neanderthals who objected to a black man fronting a TV commercial. But somehow I can’t imagine the Halifax telling customers who didn’t like Howard to take their overdrafts elsewhere 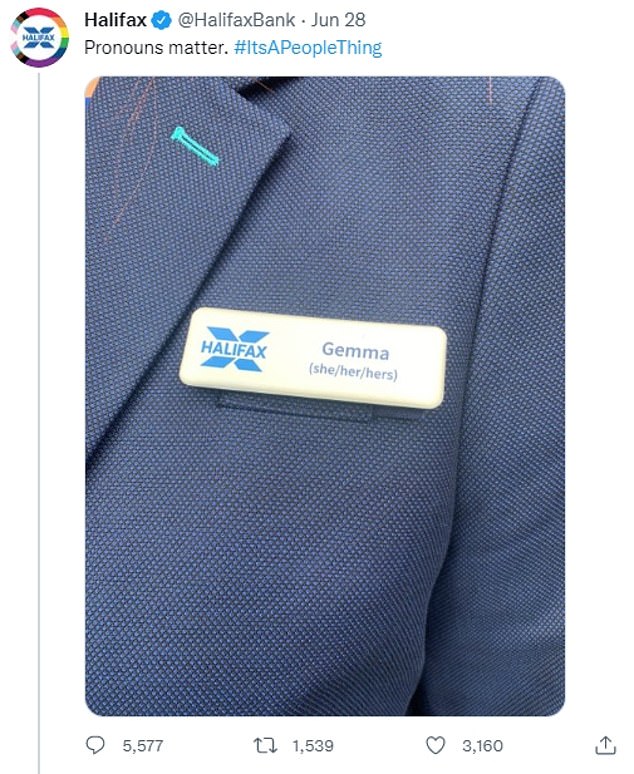 In a fatuous, virtue-signalling post on Twitter, the bank put out a photo of a staff member wearing a name tag reading ‘Gemma (she/her/hers)’ to guard against ‘accidental misgendering’. ‘Pronouns matter,’ it added. ‘It’s a people thing’

So what the hell possessed today’s Halifax Bank to invite customers who object to staff wearing trendy trans-friendly pronoun badges to close their accounts?

This is just the latest example of the widespread woke fascism which is increasingly being embraced and promoted by big business.

In a fatuous, virtue-signalling post on Twitter, the bank put out a photo of a staff member wearing a name tag reading ‘Gemma (she/her/hers)’ to guard against ‘accidental misgendering’. ‘Pronouns matter,’ it added. ‘It’s a people thing.’

Yet when thousands of people ridiculed the idea, the Halifax felt compelled to react with an ultimatum: ‘We strive for inclusivity, equality and quite simply in doing what’s right. If you disagree with our values, you’re welcome to close your account.’

What sheer arrogance. How dare companies tell their customers what to think or they can get lost? You might conclude that they are hell-bent on committing commercial suicide.

In the case of the Halifax, probably not, although if this was a publicity stunt it has certainly backfired spectacularly.

What we can’t be sure of is whether this intelligence insulting nonsense was merely the act of a spotty snowflake in the bank’s social media department flaunting his/her/their/its woke credentials on Twitter, that open sewer for onanists everywhere.

Or whether this was a cynical, calculated gambit by the Halifax’s hierarchy to get down wid da kidz. In any event, they must have reckoned it was a pretty cost-free way of parading the bank’s ‘values’ and appeasing the wokerati.

I’d love to think thousands of Halifax customers were so insulted that they really would close their accounts. But, in truth, that simply ain’t gonna happen. And the Halifax directors know it.

Too many people are locked into fixed-rate mortgages and long-term savings deals. Even if they hate this posturing with a vengeance, closing their accounts would be too much hassle.

And if they did move to another bank, there’s no guarantee it wouldn’t happen again. Big businesses, banks especially, which once saw their primary function as serving their customers and creating profits, are now desperate to be seen to flaunt their ‘values’ on everything from climate change to immigration policy.

HSBC ran a series of thinly disguised anti-Brexit commercials, telling us ‘We are not an island’. Which, of course, we are.

Ben & Jerry’s ice cream put out a statement condemning the Government’s attempts to stop illegal cross-Channel migration — as if, in the words of Priti Flamingo, that’s got anything to do with a multi-national corporation knocking out overpriced junk food.

In one of the daftest and clumsiest stunts yet, Marks & Sparks changed the name of its BLT sandwiches to ‘LGBT’, in a rainbow wrapper, to celebrate Pride Month. Hilariously, they not only managed to upset their traditional Middle England customer base, they also angered the wider gay community, which took grave offence at being equated with a jumped-up bacon banjo.

Incidentally, I’ve no objection to Pride marches, but why do we have to put up with a whole Pride Month when we only have one Remembrance Day to honour our glorious war dead? 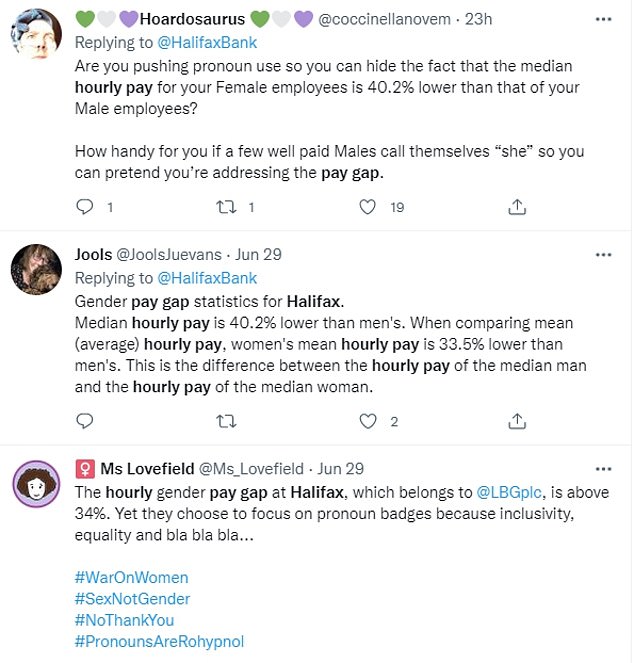 For instance, if the Halifax really cared about equality it would do something about the pay gap between men and women employees. The latest figures for the Halifax’s parent company, Lloyds Banking Group, show that women are paid just 59p for every £1 earned by men

It’s all part of the determined campaign to force the majority to accept the new Left-wing groupthink. During the Platinum Jubilee celebrations, the joyous displays of Union Flags everywhere were compared to Nazi Germany by lemon-sucking social justice warriors.

Yet we are supposed to ‘celebrate’ the hoisting of hundreds of LGBTQUERTY+ flags, which have turned London’s Regent Street into a multi-coloured parody of Berlin 1938.

We are told over and over again that Britain is a hell-hole of racist bigots and homophobes, despite the fact that survey after survey proves this is by far and away the most tolerant country in Europe.

Why else are migrants so desperate to come here, especially gay people fleeing persecution in Africa and the Middle East?

But the Left are so determined to smear their fellow countrymen as knuckle-scraping deplorables that they will seize any straw, no matter how tenuous.

Just as I predicted 15-odd years ago, ‘trans’ is the new battleground. This minuscule group has always deserved our sympathy and support, but that’s no excuse for reshaping society to satisfy the extremist demands of militant self-appointed trans ‘leaders’, some of whom commit violence against women who oppose them.

Look, as far as I’m concerned — and I would imagine this goes for most of you, too — people should be free to call themselves whatever they want and live their lives as they wish, use whatever pronouns they please.

But that shouldn’t mean compelling everyone else to fall into line. It was inevitable that our once-independent institutions and Government departments — which long ago fell to the Left-wing Common Purpose freemasonry — would enforce the intolerant woke agenda with Stalinist ruthlessness.

But we should have expected better from business. What’s in it for them? Why the hell would they want to alienate the vast majority of their customers simply to appease a handful of noisy zealots on social media?

Let’s hope that the backlash against the Halifax is the beginning of the fight back, starting with the cynical virtue-signalling by professional football, one of the most rapacious, amoral businesses on earth. 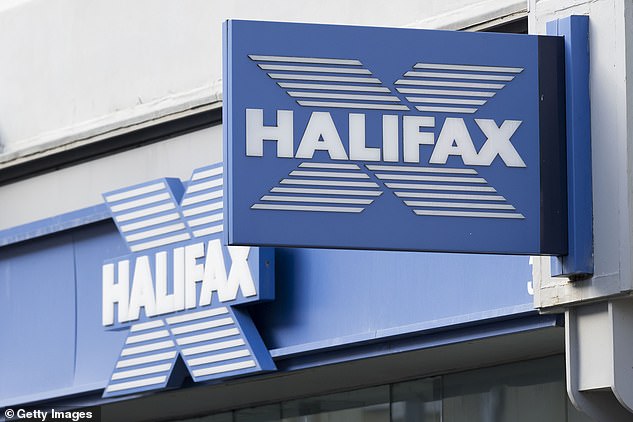 Let’s hope that the backlash against the Halifax is the beginning of the fight back, starting with the cynical virtue-signalling by professional football, one of the most rapacious, amoral businesses on earth

For my own part, I carried out my promise to cancel my Spurs season tickets while footballers continue to take the knee to Black Lives Matter, wear rainbow laces and clamber on every passing woke bandwagon.

(It’s just as well the season has ended, otherwise they’d all be wearing ‘Say No To Scrapping Wade v Roe’ armbands and supporters would be expected to observe a minute’s silence for the death of democracy in the U.S.)

For the record, I’m viscerally opposed to racism and support gay rights, but I’m not giving money to a football club which insists on telling me what to think. When a black lesbian from Tottenham’s Broadwater Farm estate becomes the club’s chairman, I may reconsider.

Not that the Spurs will miss my few grand, given the avalanche of money coming into the game.

But in the U.S., corporations who have embraced the woke agenda are suffering serious consequences.

In Florida, Governor Ron DeSantis — the man I tipped last year to be the next U.S. President — has stripped Disney World of special tax and self-government status after the company denounced his policy of preventing schools giving sexual orientation and gender identity lessons to children under ten.

Businesses which have pushed the woke agenda have seen customers desert and profits tumble. Given that trends which start in America tend to land on our shores, this should be a warning to the Halifax and other insincere corporations who fly the rainbow flag with gay abandon and preach gender equality, while practising the opposite.

For instance, if the Halifax really cared about equality it would do something about the pay gap between men and women employees. The latest figures for the Halifax’s parent company, Lloyds Banking Group, show that women are paid just 59p for every £1 earned by men.

Women make up 77 per cent of the lowest paid staff.

They might also start passing on increases in interest rates to savers more quickly, unless they really do want customers to close their accounts.

As for their corporate image, well ‘Get A Little Extra Help’ knocks ‘Pronouns matter, It’s a people thing’ into a cocked hat. It’s time ‘woke’ Halifax, woke up.