Being a beanpole is a very tall order! In Femail two weeks ago, Emily Hill said it’s terrible being titchy: Try telling that to SARAH IVENS (6ft) who’s suffered a lifetime of Big Bird jokes

The average height of a female in the UK is 5ft 3in, according to the Office for National Statistics. I tower over those women … unfortunately.

For me, the world is booby-trapped. Outdoors I get whacked around the head by low branches; indoors my trouser pockets get stuck on door handles.

My back spasms from having to fold my body into small cars, yet it’s impossible to climb out of a taxi in a skirt without flashing my knickers. 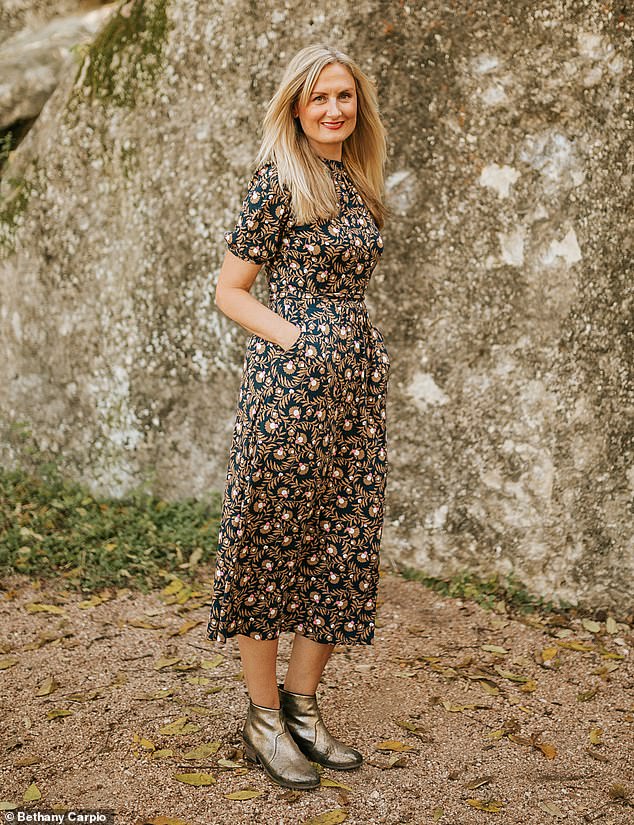 Sarah Ivens (pictured), who is 6ft, admitted that the world is booby-trapped for her, saying she gets hit by low branches or finds her trouser pockets caught on door handles

Novelist Emily Hill has written in these pages of the challenges of being a petite 4 ft 11½ in. At 38, she is still asked for ID when buying booze, wears girls’ shoes in a size two, and is regularly thrown about the dance floor by men who can’t resist picking her up.

But life is no easier — and romantic partners no more plentiful — at the other end of the scale.

When you’re peering down from a height like mine, it’s hard to make a soulful connection if you can’t gaze into one another’s eyes.

When I was single, friends tried to help — matching me to men they thought I’d get on with.

But introducing me as ‘Queen Kong’ or ‘Miss Stretchy’ to break the ice is off-putting, and being tall can be intimidating — a passion killer for a nervous man on a first date.

On one such set-up in my 30s, I tried to overlook the fact my date — a smart, sweet man who I felt an instant chemistry with — was a few inches shorter. Conversation flowed over cocktails in a bar, until he suggested we walk to a nearby restaurant for dinner.

As the rain lashed down, he opened an umbrella to protect me from the downpour. But I ended up having to stoop beside him like the Hunchback of Notre Dame to avoid eye injury.

Even worse, when a van raced past, throwing up a tidal wave from the gutter, I rushed to the kerb to protect him from the splash. 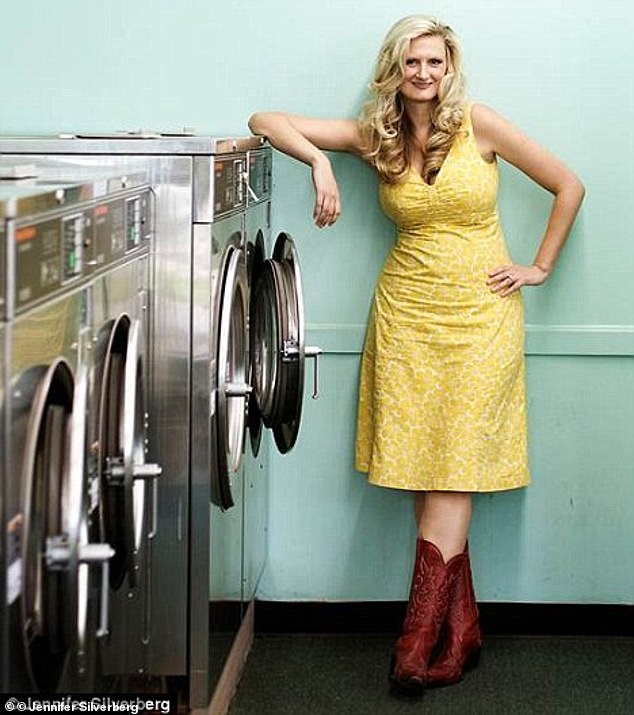 Speaking about dating as a tall woman, Sarah, 45, (pictured) revealed her friends would introduce her to dates as ‘Queen Kong’ or ‘Miss Stretchy’ in a bid to try and break the ice

As the water hit me with a thwack, I stood strong like a sea wall, while he squealed his thanks. I was his damp, ladder-legged knight in shining armour — but I knew we had no future.

And that’s perhaps the biggest obstacle facing a tall woman looking for a partner: there’s a very small pool of men who are big enough to put their arm around you in a reassuring fashion.

It’s not just dating that’s tricky. Navigating the world with any sort of grace is difficult. Aged 11, I was given the nickname ‘Big Bird’ and already 5 ft 3 in.

Towering over the boys in my class, I suffered the weekly humiliation of being partnered with teacher Mrs Thompson for line-dancing classes. Only she was taller than me.

My classmates still hadn’t spurted skywards by the time I hit 5 ft 8 in at 13, and their eyes naturally landed on my budding chest, which was mortifying.

Aged 15 and 5 ft 10 in, I was told to represent my school at high jump because, although I was a geek with zero sporting prowess, the PE teachers hoped my ostrich-like pins would give them a clear advantage in county sports championships. They didn’t.

At 18, I reached my current 6 ft, finding myself in a Lilliputian land of social embarrassment. Being a towering teen became less fun when I no longer got the occasional compliment of ‘you could be a model when you grow up’.

My hips had developed alongside my stature, and were too Wife-of-Bath-wide to make it to a catwalk. Finding fashionable clothes became a nightmare.

I had the talent of turning trousers into calf-skimming capri pants and dresses into kaftans. High heels were out. What looked elegant on petite women turned me into a clown.

This was probably the low point of my tall story. At a time when I started to be interested in finding a boyfriend, I was a gangly string bean with sharp elbows. 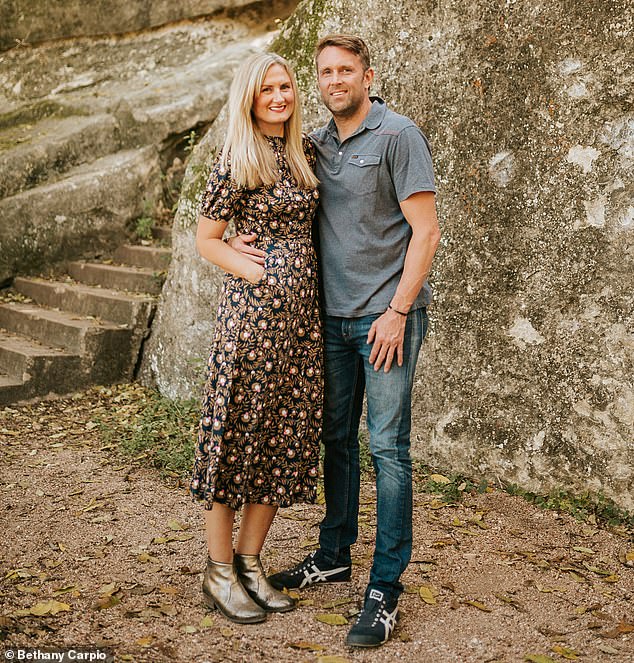 She said the first time she felt feminine was when she married her husband Russell (both pictured), who is 6ft4, in 2009 in a pair of diamanté Louboutin heels

I headed to university with my teen insecurities. My new college friends had to get used to being hugged around their heads.

I fostered a bizarre gait when walking with people, as they needed two strides to my one. In group photos at summer balls, I was hidden at the back, or forced to squat at the front.

The comments started to get to me at this point, too. ‘Wow, you’re tall!’ Really? I had no idea. ‘Is the air thin up there?’ Hilarious.

Your height can make you physically uncomfortable, too.

Stooping to hear conversations all the time means backache, slouching in cinema seats means bad posture and squashing into back seats means a stiff neck.

It was only when I hit my 30s that I came to terms with my height. I am what I am, I thought, and that is a Jolly Green Giant.

Now, aged 45, I can actually appreciate my height. I can see the stage at concerts clearly from the cheapest seats; I can eat as many chocolate Hobnobs as I want and they don’t show up on my frame as much as they might on Mrs Average.

And while calf-length skirts flap around their ankles, I can rock the look with my long legs.

I’ve also become something of a Good Samaritan in supermarkets, reaching up to the top shelves for OAPs. Learning to hold my head up high was the best antidote, too, to all those niggling aches and pains. 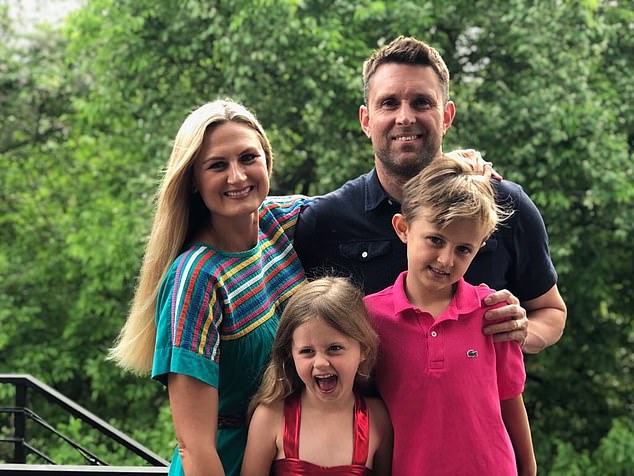 It was this new spirit of self-acceptance that led to romance. Russell and I had dated briefly during my insecure phase at university, as a pair of lanky 19-year-olds, but reuniting aged 34, when we’d both grown into ourselves — physically and mentally — we were kindred spirits.

As soon as our eyes locked over everyone else’s heads, at our first meeting in 15 years, we knew we’d finally met our match.

I married in 2009 standing at 6 ft 3 in in a pair of diamanté Louboutin heels, and felt fabulous.

For the first time, I felt feminine — thanks to my 6 ft 4 in husband.

‘The first thing I want to say today is congratulations,’ my chief bridesmaid Claire said when she began her speech at the reception. ‘After years of denial, Sarah is finally walking tall and has finally found a man who is taller than her.’

At last, I was free of the men who I’d protect from puddles or unruly cyclists as we walked down the street. Finally, when I loved my height, I found someone else to love it, too.