SARAH VINE: This was the year terrestrial TV died

With the exception of Masterchef and the Antiques Roadshow, I’ve more or less given up watching the BBC, as it seems to be living in a parallel universe where Frankie Boyle is funny and Alastair Campbell is still running Downing Street.

But like a fool I tuned in anyway on New Year’s Eve, expecting to be vaguely entertained – or to get some useful perspective on what, let’s face it, was one of the biggest moments of national transformation in our history: leaving the EU.

Instead we had Mock The Week, Graham Norton and endless carping about lorry queues (which, in the end, never transpired) on BBC News 24. The only decent thing was Jools Holland on BBC2, which probably means he’ll soon be culled for being old, white and knowing his Ramones from his Rolling Stones.

But otherwise, it was a cultural and intellectual desert. Where was the insight, the debate, the historic perspective? Where were the Laura Kuenssbergs, the Jeremy Paxmans, the Andrew Neils? I mean, fair enough, the BBC hasn’t exactly been the greatest cheerleader for Brexit. Perhaps it was too much to expect it actively to celebrate it. But at least properly acknowledge it, for goodness sake.

And it wasn’t just the BBC. All of terrestrial telly had pretty much checked out for the night. ITV had Skyfall, followed by a gloomy Rageh Omaar. Channel 4 bunged on Little Fockers, the least funny film in a trilogy that is more than a decade old. As for Channel 5, I’m not even going to waste the newsprint. It was as though they’d all just given up and gone home. Probably to watch Netflix, like everyone else.

Of course, New Year’s Eve is not, traditionally, a big TV night, since usually most people are out partying. But this was no ordinary Hogmanay; this was the end of 2020.

Never before in living memory has the entire country effectively been grounded, stuck at home at the end of weeks and weeks of being… well, stuck at home, desperate for a bit of novelty and entertainment. It was the perfect opportunity for the main terrestrial channels to prove their relevance, to put on a display of talent and prowess, to show those upstarts that it is not all about the kind of production values only a billion-dollar budget can buy.

That there is merit, still, in the collective TV experience, that make-a-date telly, that moment when the entire nation sits down together united in one purpose, whether it be to find out who killed Dirty Den in EastEnders or to watch the jailing of Deirdre Barlow. But no, they flunked it. The biggest captive audience TV has ever known, on one of the most important nights in recent political history, and what do we get? A few lacklustre celebs, and Alicia Keys singing a song about New York. Out of tune.

Is it any wonder that ratings are at an all-time low? Or that a new poll, revealed yesterday, shows that half of Britons now think the BBC licence fee should be scrapped?

At a time of great change, this feels like a very big shift indeed: 2020, it seems, was the year that terrestrial TV died.

Amazing to think that something that has been with us for decades should be going the way of video recorders or landlines. But there’s no doubt that it is.

And while, given recent performances, it’s hard to have much sympathy for these TV execs whose lack of vision has contributed to the decline, I, for one, shall miss it terribly. Not just for the familiarity of routine, the way that following my favourite shows from week to week used to mark out time. Or for the inevitable water-cooler moments, those shared experiences that transcended class or culture.

But for the solidity and certainty those schedules offered in an ever-changing world. My goodness how we could use some of that now.

Catherine the Great’s lesson for The Crown 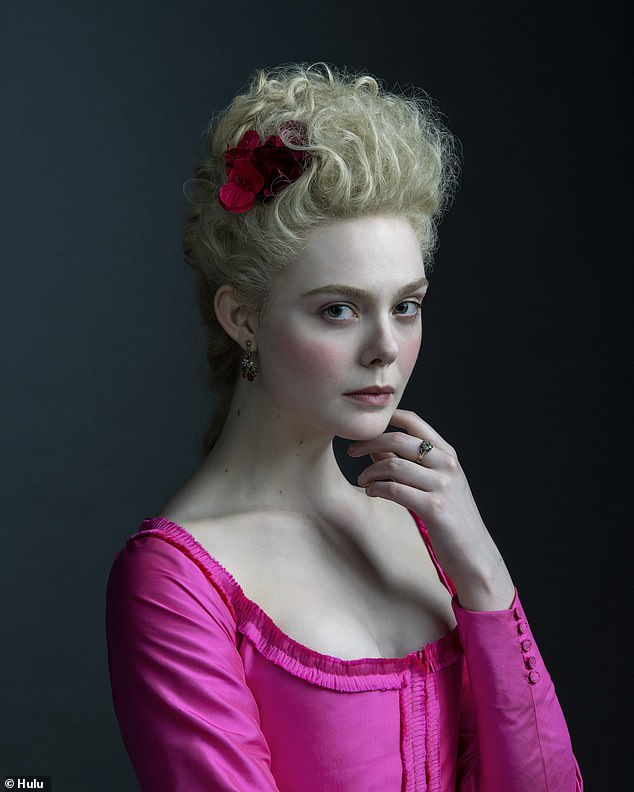 Tonight’s new Channel 4 drama The Great, about Catherine of Russia, is to carry a disclaimer that the events it portrays are only ‘occasionally true’, in a bid to avoid the criticism levelled at Netflix’s The Crown. But this misses the point.

The Great is harmless fantasy (for example, the lead role is played by the exquisite Elle Fanning, pictured, while Catherine herself was not exactly, even in her pomp, a pin-up) about a long-dead dynasty.

The problem with The Crown is that the Royals it portrays, often in a grotesquely unfair light, are living, breathing individuals whose existence is being ruthlessly mined for profit.

One is entertainment, the other exploitation. 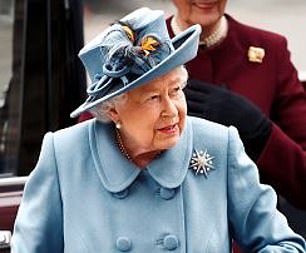 Apparently, the Queen took just seconds to decide not to allow Prince Harry to lay a wreath at the Cenotaph, on the basis that when it comes to the Royal Family, ‘either you are in or you are out’.

Good. In that case it should take even less time to realise that the Duke and Duchess of Sussex are exploiting their Royal status to line their pockets in America – and draw the obvious conclusion.

Harry wants to lead a ‘normal life’? Fine. Relieve him and the missus of those tiresome titles, Ma’am, and his wish shall be granted. 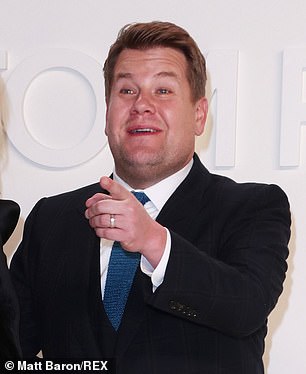 James Corden, 42, has been unveiled as the new face of Weight Watchers, saying he’s ‘fed up’ with the way he looks

Hollywood, where eating and drinking is generally frowned upon, has always been a sort of fat camp for British celebrities.

Now James Corden, 42, has been unveiled as the new face of Weight Watchers, saying he’s ‘fed up’ with the way he looks. Good for him.

But it’s hard when your whole persona has been based on being the funny, relatable, fat fall guy.

By all means shed the weight, Smithy. But please don’t also lose your sense of humour along the way.

Dame Joan Bakewell says her hopes have been dashed by the decision to delay second doses of the vaccine so that more people can be inoculated. ‘I let my mind conjure visions of a restaurant table, a tempting menu, a glass of wine,’ she complains. I understand her disappointment. But until more of the population has some kind of immunity, there will be no restaurants and no tempting menus for anyone. Sorry if that spoils your plans, Dame Joan. But we all have to make sacrifices sometimes.

Personally, I’m glad that Sadiq Khan showed his true colours on New Year’s Eve with that excruciatingly self-serving and woke firework display, featuring drones making the shape of Black Lives Matter clenched fists. The more Londoners see him for what he is – a divisive, tribal egomaniac – the more chance we’ll have of getting rid of this pocket Napoleon in May’s mayoral elections. Keep digging, Mr Khan.

Well, 2021 didn’t get off to quite the start I’d hoped for. My daughter, who sits her A-levels this year, found out she won’t be going back to school until January 11. Ditto my son, who is taking his GCSEs. And they’re the lucky ones – most of the country’s youngsters will be kept off until the 18th at the earliest. We’re forever being told Covid doesn’t really affect children, but of course that’s not true. It might not make them ill. But not all suffering is physical.

If we are going into tier 5, whatever fresh hell that may entail, can it please involve a ban on obnoxious joggers? In the park on New Year’s Day, ambling quietly along with the dogs, I was practically flattened by a furious man in an all-black ensemble, his thighs reddened by the Arctic air, who passed so close to me, huffing and puffing and spluttering, that had I not been a middle-aged woman I might have feared for my reputation. Why do some people think that just because their nether regions are encased in Lycra that they can ignore social distancing?

I know celebs think they are doing us a massive favour ‘sharing’ snaps of their glittering holiday destinations, but Amanda Holden in nothing but bikini bottoms, above, is one thing I can live without.

The unlikely ‘Vegan Conservative Group’ has announced its arrival to a waiting world. To mark the event, ten Tory MPs have agreed to take part in ‘Veganuary’. Not my husband. He’s still reeling from my own attempts to live the plant-based dream which, not to put too fine a point on it, rather put the wind up the whole family. Never again.