Annapolis, USA — Baltimore prosecutors asked a judge on Wednesday, local time, to vacate Adnan Syed’s conviction for the 1999 murder of Hae Min Lee — a case that was chronicled in the hit podcast Serial.

Baltimore’s state’s attorney filed a motion in circuit court, saying a lengthy investigation conducted with the defence had uncovered new evidence that could undermine the conviction of Syed, Lee’s ex-boyfriend. 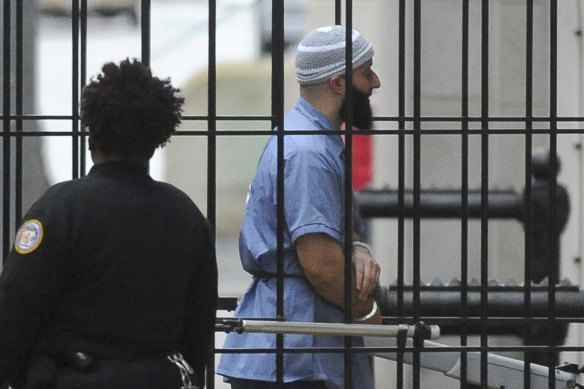 Adnan Syed enters Courthouse East prior to a hearing in Baltimore in 2016.Credit:The Baltimore Sun/AP

“The motion filed today supports a new trial for Syed based on a nearly year-long investigation that revealed undisclosed and newly developed information regarding two alternative suspects, as well as unreliable cell phone tower data,” the state’s attorney Marilyn Mosby’s office said in a news release.

Syed, 42, has maintained his innocence for decades and captured the attention of millions in 2014 when the debut season of the Serial podcast focused on the case and raised doubts about some of the evidence, including cellphone tower data.

Prosecutors said they weren’t asserting that Syed is innocent, but they lacked confidence “in the integrity of the conviction” and recommended he be released on his own recognisance or bail.

“We believe that keeping Mr. Syed detained as we continue to investigate the case with everything that we know now, when we do not have confidence in results of the first trial, would be unjust,” Mosby added.

The state’s attorney’s office said if the court grants its motion it would effectively put Syed in a new trial status, and his convictions would be vacated, but the case would remain active.

“Whether the State ultimately continues with a trial in this matter or dismisses the charges will depend on the outcome of the ongoing investigation,” the state’s attorney’s office said.

Prosecutors said a reinvestigation of the case revealed evidence regarding the possible involvement of two alternative suspects other than Syed. The two suspects may be involved individually or may be involved together, the state’s attorney’s office said.

Now, prosecutors say, the approximately year-long probe revealed two alternative suspects who were known to the authorities 23 years ago but not disclosed to Syed’s defence. Neither prosecutors nor defence attorneys will reveal the suspects’ identities because the investigation is ongoing, according to the motion.

One of the suspects had threatened Lee, saying “he would make her [Ms. Lee] disappear. He would kill her,” according to the filing.

“Given the stunning lack of reliable evidence implicating Mr. Syed, coupled with increasing evidence pointing to other suspects, this unjust conviction cannot stand,” said assistant public defender Erica Suter, Syed’s attorney, and Director of the Innocence Project Clinic. “Mr. Syed is grateful that this information has finally seen the light of day and looks forward to his day in court.” 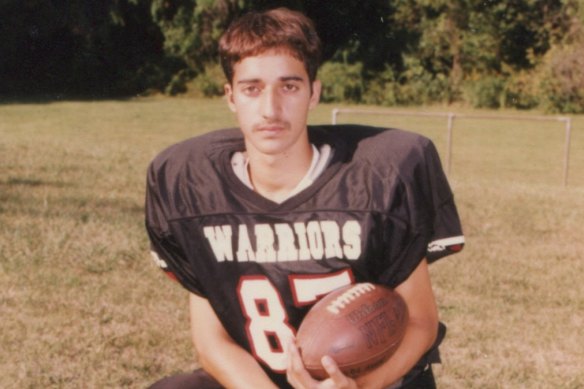 Adnan Syed has been in prison for more than 20 years.

The suspects were known persons at the time of the original investigation and were not properly ruled out nor disclosed to the defence, prosecutors said.

The investigation also found a separate document from the original trial file, in which a different person relayed information that can be viewed as a motive for that same suspect to harm the victim, prosecutors said. The information about the threat and motives to harm could have provided a basis for the defence and was not disclosed to the trial nor the post-conviction defence counsel, the state’s attorney’s office said. 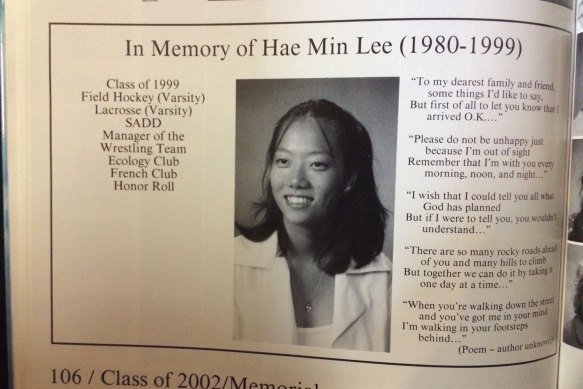 Murder victim Hae Min Lee pictured in a memorial in her yearbook.

The state’s attorney’s office declined to release information about the suspects, due to the ongoing investigation.

Prosecutors also noted unreliable cellphone data used during Syed’s court case to corroborate his whereabouts on the day of the crime. The notice on the records specifically advised that the billing locations for incoming calls “would not be considered reliable information for location.”

“Evidence proved that the State should not have relied on the incoming call evidence,” the state’s attorney’s office said.

Syed has served more than 20 years in prison for the strangling of Lee, who was 18 at the time. Her body was found weeks later buried in a Baltimore park.

In 2016, a lower court ordered a retrial for Syed on grounds that his attorney, Cristina Gutierrez, who died in 2004, didn’t contact an alibi witness and provided ineffective counsel.

But after a series of appeals, Maryland’s highest court in 2019 denied a new trial in a 4-3 opinion. The Court of Appeals agreed with a lower court that Syed’s legal counsel was deficient in failing to investigate an alibi witness, but it disagreed that the deficiency prejudiced the case. The court said Syed waived his ineffective counsel claim.

The U.S. Supreme Court declined to review Syed’s case in 2019.