Every seven years or so, like a recurring global spasm, scientists from around the world update their understanding of how the planet is heating up, what the impacts will be and what we might do about it.

Known as the Intergovernmental Panel on Climate Change, the resulting reports serve as what one contributing author calls a “golden book” of climate science in three volumes plus a synthesis report.

The first volume of the Sixth Assessment Report (AR6) was released on Monday and lays out in exacting detail in about 4000 pages how jamming our atmosphere with greenhouse gases is altering the climate.

Temperatures, for one thing. The mean temperature at the surface – where we live – has warmed 0.24 degrees since the 2013-14 Fifth Assessment Report (AR5) evaluated data to 2011. Let’s call it a quarter. We’re now about 1.1 degrees warmer than the 1850-1900 baseline and, given the slow process of how our extra emissions trap more heat from the sun, we will heat further even if carbon dioxide, methane and other greenhouse gas pollution ceased today. (Spoiler: They won’t.)

Apart from more refined estimates, AR6 has stepped up regional forecasts including carving Australia into four zones. The blame humans carry for altering the climate – known as attribution research – also gets more prominence. (Spoiler: we are responsible for virtually all of it.)

Do these reports do much?

These IPCC reports aren’t meant merely to gather dust (though they do), but inform governments (Intergovernmental is a clue) and the public (that might nudge those policymakers to act).

Since the first assessment report (presciently dubbed FAR) in 1990 said, “the climate is warming, folks”, we’ve belched 1 trillion tonnes (1,000,000,000,000) of CO2 by burning fossil fuels and clearing land. It’s also 41 per cent of all the estimated emissions since 1750, so if it’s a pedal we’re hitting, it’s not the brake. Temperatures, particularly since the 1970s have been going one way, and the best climate models are doing an increasingly good job at matching observations.

1.5 degrees and all that

Remember Paris and that 2015 climate summit where almost 200 nations agreed to keep warming to between 1.5 degrees and “well below 2 degrees”? Well, this instalment of AR6 is meant to guide leaders when they gather (or Zoom into) a summit in the less glamorous Glasgow in November. (The other two reports, on impacts and what emissions action we could take, won’t land until next year.)

Remember, though, that 1.5 degrees and 2 degrees are both arbitrary. Look at Greece this week, Canada or California last month, or our home-fired Black Summer last year to get a glimpse of how juicing the climate is already raising the odds of extreme nasties. Heatwaves are one of them.

Oh, and as the 1.5-degree target represents a 20-year average, don’t be surprised if we cross that marker in an El Nino year (when the Pacific Ocean unhelpfully doesn’t absorb as much heat and gives some back) this decade. We hit that mark in a month during the 2015-16 El Nino, according to the Bureau of Meteorology’s Blair Trewin. 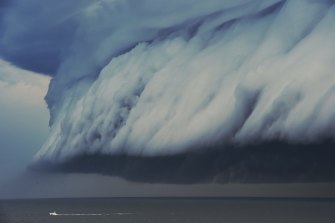 The improved resolution of climate models has allowed this IPCC report to provide a closer look at how regions of the world might fare as the planet heats up.

Land warms faster than the ocean, and that happens to be where most of us live. In Australia, we’ve warmed about 1.4 degrees so far, since 1910. Projected warming doesn’t make for a happy scene, particularly for maximums, and that’s not considering heatwave spikes.

Rainfall is likely to be heavier when it comes, as the atmosphere holds about 7 per cent more moisture per degree. Unfortunately, southern Australia will remain on its drying trend, particularly in winter, as west-to-east storm tracks shifting closer to Antarctica. Other unpleasant outcomes await those living near the coast as sea levels rise, while the “intensity, frequency and duration of fire-weather events are projected to increase throughout Australia” the report states with “high confidence”.

The third AR6 report will explore in more detail what fossil pathways we might saunter down, but this one gives us a taste of what we can expect. It presents five specific options, ranging from low to high emissions, and includes methane, nitrous oxide (think fertiliser) and other heat-trapping gases.

Taking the lowest scenario (awkwardly named “shared socio-economic pathway”) won’t get us to net-zero emissions or so-called climate neutrality this side of 2050.

Remember, that target is what many rich nations have signed up for, while the Morrison government says it’s a “preferred” goal. Better not get stuck on a higher or moderately high emissions path or we’ll never get there.

So, how much can we burn?

Let’s say every time you flip on an electric toaster or drive your car (assuming you’re not offsetting both by buying renewable energy or planting a tree, or so on), you’re helping warm up our planet. (Big picture: every trillion tonnes of CO2 likely causes a best-estimate of 0.45 degrees warming.)

Now, we burn or emit about 42 billion tonnes of CO2 a year. The AR6 report puts a range of probability risks around what we might aim for. If it’s to keep warming to 1.5 degrees or stay thereabouts, and we think we’d like a 50-50 chance, then we have 500 billion tonnes of C02 to go, or 12 years of current pollution levels.

Or as Andy Pitman, director of the ARC Centre of Excellence for Climate Extremes puts it: “I don’t want my future based on the toss of a coin.” Who flies in a plane with a 50 per cent of crashing?

Tipping points and other unfathomables (for now)

Professor Pitman is not alone in thinking we’re all but set for 1.5 degrees of warming. Pep Canadell, one of the AR6 report authors and senior CSIRO researcher says “there’s a lot of warming all the way to 2050. And it’s coming fast”.

The report, if anything, errs on the side of caution, noting the limited data on so-called “low probability, high impact” events such as the disintegration of Antarctic ice sheets (think more than 15 metres of sea-level rise) or the halt of the Gulf Stream. For the latter, (fancy name: Atlantic Meridional Overturning Circulation), the report says “there is medium confidence that there will not be an abrupt collapse before 2100″. Not so reassuring if you live in northern Europe.

What keeps people like Professor Pitman awake at nights, though, is the prospect that the biosphere won’t behave as it has for the past couple of centuries of our carbon-plus experiment. The AR6 report notes that as emissions rise, the land and ocean won’t be so cooperative and take up as much of the extra emissions we’re sending up.

If the atmosphere keeps it, we’d better come up with some good ways to take it back out, and fast.