How to dress like a grown up with Shane Watson: Why stompy boots aren’t just for sulky teenagers

You might not have heard of Lug soles. But you’ll know them when you see them. Lug by name lug by nature, they’re those tyre-track rubber soles that have been cropping up on loafers, and particularly on a cross between a Chelsea boot and a biker boot.

This boot is longer than a Chelsea boot (usually mid-calf), sturdier and, crucially, has the sort of rubber sole that would be over the top for a combat boot. This is where the lug sole has found its natural home — which is why it’s called a Lug boot — and a strong and growing fanbase.

Not that it’s easy.

It’s one of those fashions you take one look at and think ‘strictly for the kids’. Then, three months down the line, you spot a chic woman in a faux fur leopard-print coat and jeans tucked into — what do you know? — top-of-the‑range Lug boots (a cool £800 from Bottega Veneta), and you realise you may have been mistaken. 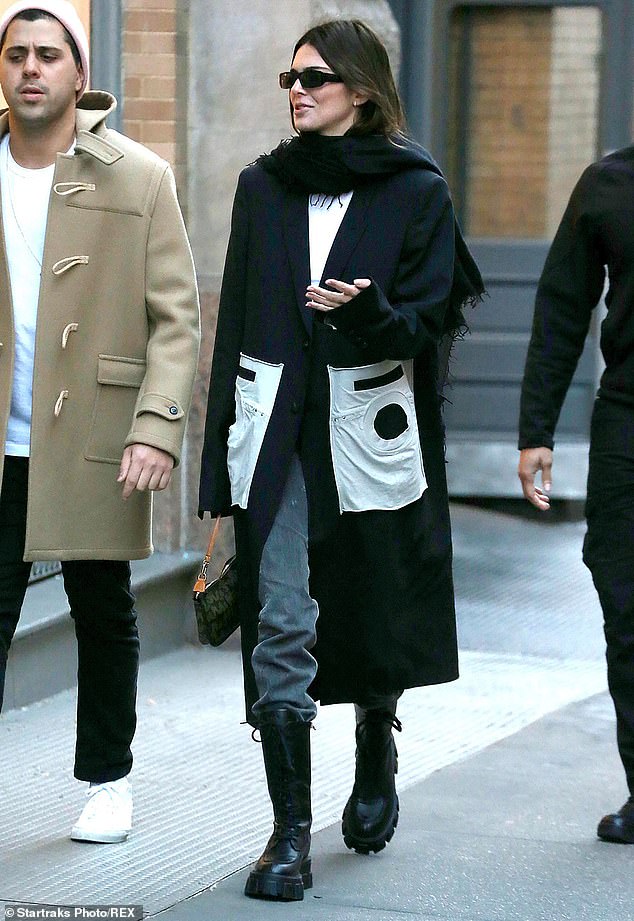 No one can pretend these boots are elegant. But then, nor were Uggs or flatforms or Birkenstocks or clogs or a lot of the footwear we’ve grown fond of because it works and it suits our mood.

And our mood right now is the opposite of flimsy, pretty and impractical, especially when it comes to what we’re wearing on our feet.

Meanwhile, the fact that all the top designers are sold on Lug boots for winter means it’s not just students who are wearing them. And they’re undoubtedly as cool as they are practical.

If you were a fan of heavy-duty biker boots back in the day, it’s entirely possible you’ll find yourself drawn to a Lug boot in the months to come, is all I’m saying, and then you’re going to want to know what the sensible options are.

The one that’s similar in character to the Bottega Veneta boot is Russell & Bromley’s Highway Chelsea Boot (£255, rusellandbromley.co.uk). It’s a little bit Chelsea (the elastic inserts and pull-on tabs) and a lot biker (chevron stitching and general sturdiness). The soles on these — double-welted and cleated — are inches thick. These boots are not made for walking into parties, unless they’re held outside, of course.

The idea is to wear them with trousers or jeans tucked in, or midi-dresses and skirts. But if you’re going in that direction, you’ll definitely want something more toned down.

For an equally solid-soled but less cleaty boot, the best bet is Mango (£89.99, mango.com). Dutch brand Nubikk does a good high top Chelsea boot (£180, nubikk.com) with a slightly less thick sole which looks lighter and less intimidating. It comes in beige as well as black — lighter colours and contrasting soles are what the fashion girls will be wearing — but solid black is going to serve you better.

If you want to go for something less extreme (and who could blame you), Russell & Bromley does a Sneaker Chelsea Boot which, as its name suggests, is somewhere between a Chelsea boot and a platform sneaker (£195, russsellandbromley.co.uk).

It’s a godsend if you’re looking for extra height without a heel. But then, you’re getting extra inches with most of these boots.

Don’t make the mistake of thinking a shorter-cut boot is less hardcore and, therefore, easier to wear. Oddly, the extra length of the classic Lug boot makes it more streamlined and less heavy-looking. It also gives you more options.

Camper does a chunky-soled zip-up boot with pull-ties (£170, camper.com) that’s my favourite of the lot; quite bikery, not too short, not too long, with that all important beefed-up sole. Simple.

Who knows how long this fashion will last, but even if it peters out fairly quickly, you’ll have a pair of boots you can do the dirty work in. You can’t say that about many things on the fashion bullseye.