They’re talking about the messy heartbreak of spilling your ketchup or dipping sauce in the car, of course. William Moujaes, Michael Koury, and Tony Lahood are the creators behind Saucemoto, a dipping sauce holder that attaches to the air vent of a vehicle. They’ve sold 12,000 units for $77,000, and were asking $45,000 for a 15% stake.

“Since the advent of the drive-through, we’ve all been faced with a horrible decision when eating in our cars,” Koury said. “Risk fumbling and making a mess with your dipping sauce, or, heaven forbid, having to eat a ketchup-less fry.”

Holding the product up like Simba from “The Lion King,” the men then demonstrated the product by acting out a bumpy road, pretending to drive while shaking their office chairs. The trio told the sharks their series of viral videos for the product got44 million views. 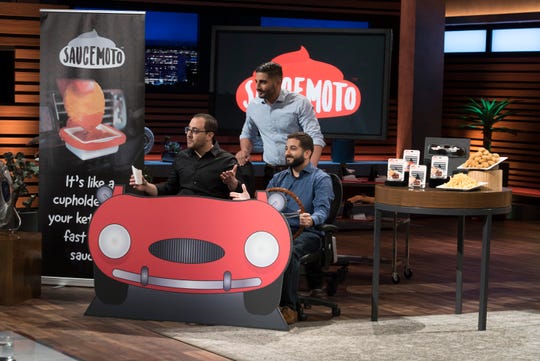 Shark Barbara Corcoran was less than impressed, though even she admitted she liked their package design. “You really thought this was a big problem?” she asked before questioning Lahood’s calm demeanor. “I’m just curious, are you excited to be here? I’m not sure I’m feeling any pulse from you.”

His friends insisted that was just his normal attitude. They developed the idea 10 years ago during a road trip where Moujaes had a messy fast food accident in Lahood’s car. They planned to increase their sales by tying their product to promotional brands, and are in the process of securing deals with two major sauce manufacturers.

Shark Kevin O'Leary is hooked on Saucemoto, a dipping sauce holder that attaches to the air vent of a vehicle, offered on "Shark Tank." (Photo: Eric McCandless, ABC)

Shark Mark Cuban enjoyed their enthusiasm but thought they had too much work ahead of them: “Look, I think it’s a great product, but like you’ve already found out, you’re going to have to hustle for big sales across promotional opportunities. That’s just a lot of time, and it doesn’t get me all sauced up.”

Shark Kevin O’Leary loved the product, wanting to sell it at fast food drive-throughs  around the country. But for the $45,000, he wanted a 50% stake in the company. “I think this is huge. I do see the use of it. I eat fries in the car, and I like to dip my fries, and it is an issue. But you know, I have to wet my beak.”

The children of a late New York City firefighter fulfilled his dream of selling his cutting board. Now it's found a partner.
USA TODAY

On the other hand, fellow shark Robert Herjavec was more interested in the trio as a team than their current product. He saw an opportunity to take their growing brand and work together on future products, offering them the money for a 40% stake.

“I have to tell you, it’s the team,” Herjavec said. “Maybe it works. Maybe it doesn’t. I love the three of you guys and your ability to create the videos and the marketing. I actually think there’s a great product within you. This may or may not be it, but I’ll go along for the ride.” 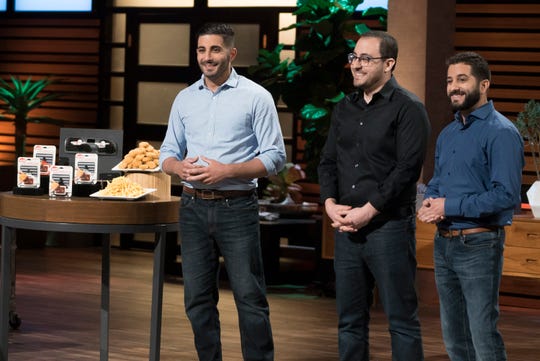 But O’Leary had a curveball, lowering his offer to 25%, making them all partners.

“So, we’re all equal,” he said. “Stop thinking about it. The clock is ticking, and I want you out of here with me as your partner.”

They decided to accept his deal. As the four of them hugged it out, O’Leary said, “Let’s go make hundreds of dollars.”