SHOCKING Line of Duty moment as secret of ‘H’ is revealed

SPOILER ALERT: 10million are glued to their screens to watch SHOCKING moment Line of Duty fans didn’t see coming as the secret of bent copper ‘H’ is FINALLY revealed

Viewers of Line of Duty have been left reeling after the series five finale revealed the secret behind crooked policeman ‘H’.

Tonight’s episode was estimated to have a huge audience of more than 10million with the first four shows of this series attracting larger viewers than any other programme on UK television this year.

Fans of the show have been following it avidly to discover the identity of the bent copper ever since murdered Dot’s deathbed confession – which appeared to suggest their first name began with a ‘H’.

However, in tonight’s 90 minute series finale, DC Steve Arnott re-watched the moment – and noticed that Dot, who was unable to speak after being shot, was tapping out morse code with his fingers. 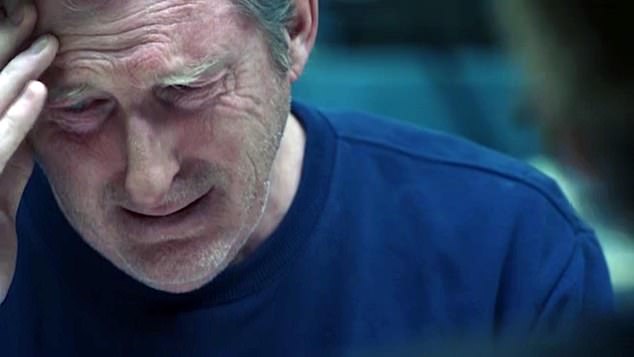 Reaction: Viewers of Line of Duty have been left reeling after the series five finale revealed the secret behind crooked policeman ‘H’ 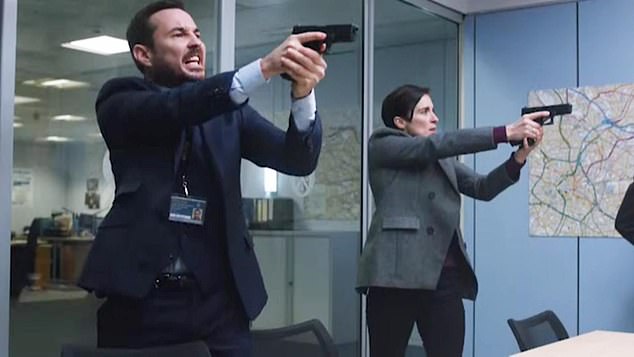 All the drama! Tonight’s episode was estimated to have a huge audience of more than 10million with the first four shows of this series attracting larger viewers than any other programme on UK television this year

The dying copper tapped out four figures suggesting there were in fact four crooked cops in the force.

And with three uncovered so far, the nation is gripped for series 6, so they can find out who is the fourth.

After a harrowing interview period at the start of the programme, it seemed that every possibility pointed towards DC Ted Hastings being so-called ‘H’.

But his quick-thinking colleagues DC Steve Arnott and DI Kate Fleming continued to have faith in the policeman, and were determined to clear his name.

Fans began to suspect after last week’s episode that Gill Biggeloe had something more to do with it. 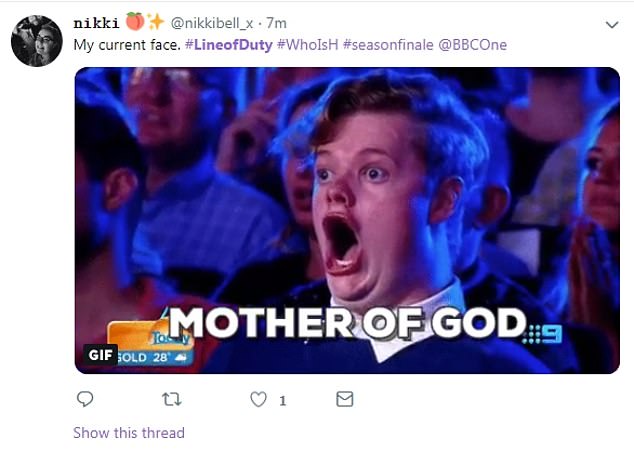 Following the end of the series, fans took to Twitter to share their feelings about the finale 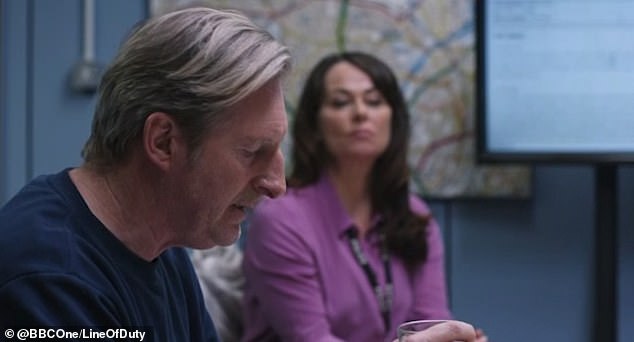 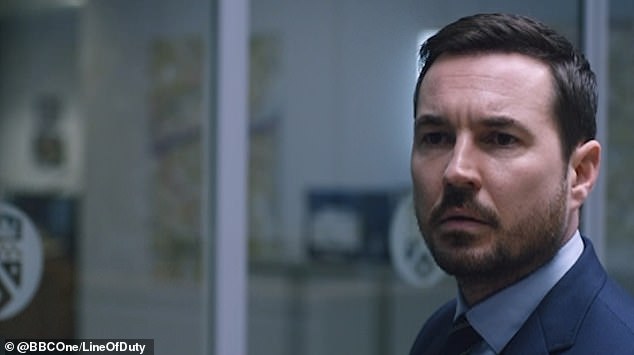 Some even suggested she was ‘H’ and that Dot had attempted to blink on hearing the letter ‘G’.

And tonight’s episode revealed she was a villain – and was trying desperately to frame Ted with conspiracy to murder undercover copper John Corbett.

They uncovered evidence which suggested that Gill Biggeloe had met John Corbett long before Operation Peartree, and had stoked the undercover copper to work for the force.

She sought incriminating evidence on Hastings, and then used it to try to convince John Corbett that Ted was H, saying: ‘We’re setting up an undercover operation to prove he’s bent.’ 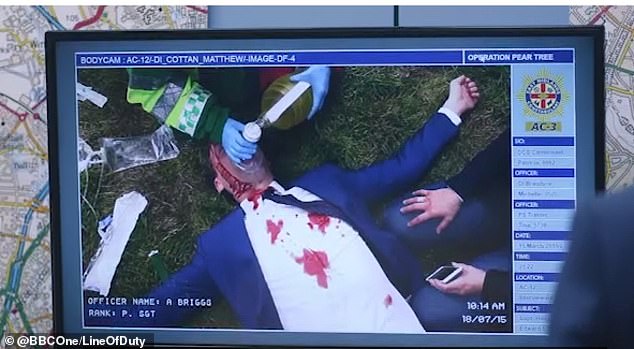 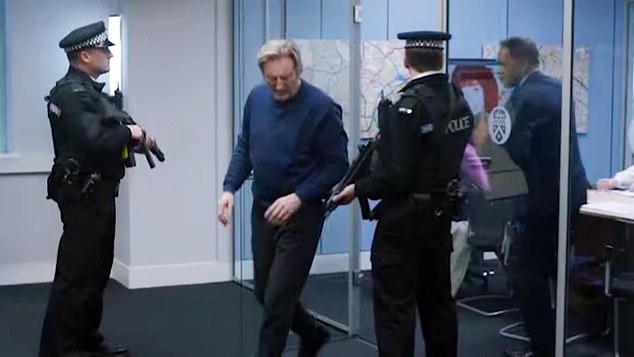 But while Gill turned out to be corrupt, it was clear that she wasn’t ‘H’, and she was taken into custody.

Tina assured the team she’ll look after the bent copper, telling her: ‘I’m afraid I’m going to have to cuff you. You might want to do a loo break now.’

But when she tried to go to the bathroom, Tina attacked her with a knife, stabbing her in the hand and the two began to tussle.

As Gill screamed for help, Kate and Steve rushed into the bathroom with the DC shooting Tina in the chest. 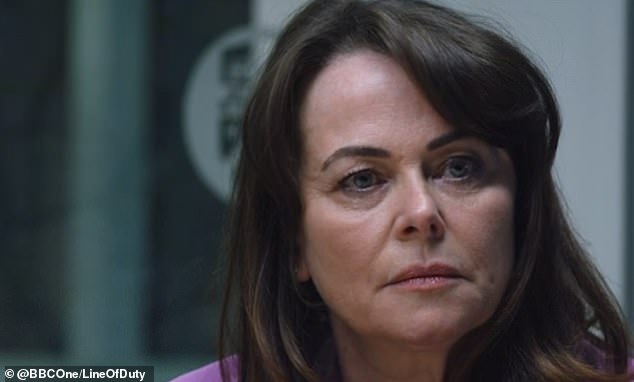 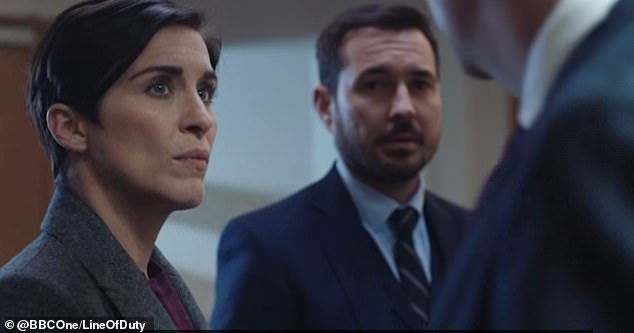 Kate and Steve broke the news to Hastings, and left fans reeling because they realised they’d discovered the secret behind ‘H’ – but still had no idea who the fourth corrupt copper in the force is

Steve believed she was sent in order to stop Gill from talking and revealing the secrets behind the corrupt organisation.

With Ted back in his police uniform, he joined Steve and Kate to re-examine Dot’s dying interview.

Steve said: ‘The frame it was frozen on made me realise something we’ve all missed. Look at Dot’s left hand.’

He went on: ‘Dot was trying to tell us something before he lost consciousness. He couldn’t speak due to the gunshot wound to his chest but he could move his hand.’ 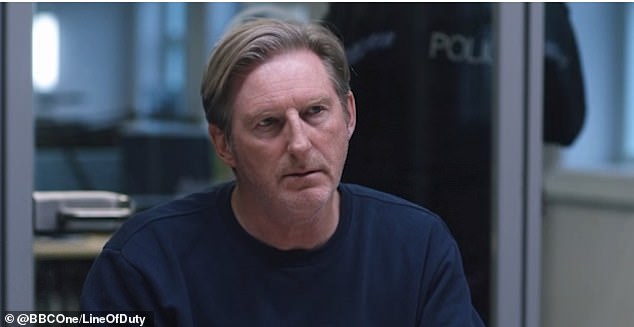 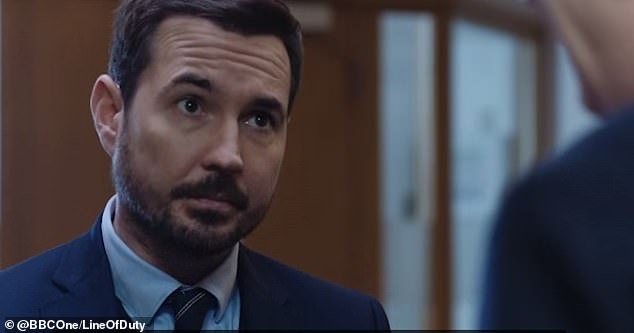 The officers counted out four dots, before Steve revealed to Ted: ‘The letter H in morse code is four dots. H is not an initial. Four dots. Four caddies. Four police staff on leave for organised crime.’

Meanwhile, Kate pointed out the three caddies discovered so far: ‘Dot. Hilton. Gill. Plus one more.’

The character of Dot died in season three after being shot while Derek Hilton was killed in series four, when viewers realised he too was linked to organised crime.

Finally, this series unveiled Gill as the third piece of the puzzle – but there still remains one corrupt copper in the Line of Duty force.

And fans who expected to discover who that might be were left reeling, as they took to Twitter to express their thoughts on how the show ended.

Fans who expected to discover who that might be were left reeling, as they took to Twitter to express their thoughts on how the show ended

One said: ‘Line of Duty left me with more questions than answers, thanks guys.’

And another viewer said: ‘A tad disappointed in Line of Duty there. Milking it a bit. Kept my interest, but in all honest that is because of the previous series, as a stand alone, pretty disappointing series overall.’

‘That was a very good, exciting episode but a disappointing ending to the whole saga. It feels like there should be one more episode to the series,’ one social media user wrote.

Another unimpressed viewer added: ‘Well unless there’s a spectacular twist I’ve wasted 6+ hours of my life…#LineOfDuty.’

Yet it wasn’t all disappointment as some viewers felt the finale set up the TV show perfectly for the next series.

‘Just when you think everything has been solved, they throw a spanner in the works. There is another corrupt officer’, one excited viewer explained.

Tonight’s episode was estimated to have a huge audience, with previous shows of this series averaging 10.6million viewers in seven-day four-screen consolidated figures.

Last Sunday’s show got the highest overnight figure for Line Of Duty ever – peaking at 8.3million and averaging at 7.9million.