Sin, sex and Celine Dion: This is the best album you’ve never heard of

Everyone knows Natalie Imbruglia’s Torn is a cover. Same for Toploader’s Dancing in the Moonlight. But did you know Celine Dion’s classic It’s All Coming Back to Me Now also had a life before her? 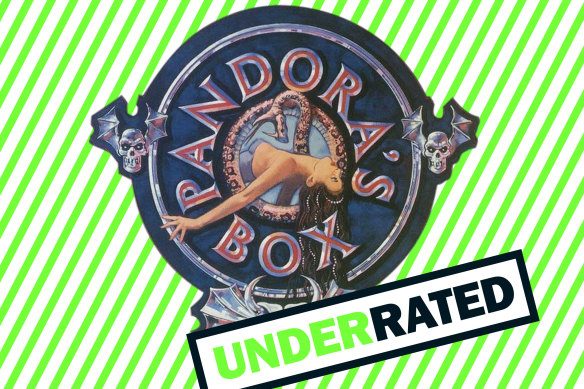 The record, Original Sin, is a tour de force of the genre: ridiculous, over the top, dripping in lyrical and musical excess, a bigger “wall of sound” than anything Phil Spector could have imagined.

The original It’s All Coming Back is somehow even more bombastic than Dion’s relatively restrained version, featuring one of the great guitar solos in all music that stretches the timer to eight minutes and 22 seconds.

It was, of course, criminally underrated at the time, peaking at No.51 on the British singles chart on October 14, 1989. But the song did eventually gain the accolades it deserved seven years later when Dion’s version became a worldwide hit that reached No.2 in the US and No.3 in the UK.

It’s All Coming Back has particular resonance for me because it featured on a tape (yes, an actual cassette) of Celine Dion songs I had my father make for me when I was five – in retrospect, a fairly blatant indicator of my future homosexuality.

But Original Sin has much more to offer than one song. It begins with a 20-second spoken word intro titled The Invocation: “If light were dark, and dark were light, the moon a black hole in the blaze of night, a raven’s wing as bright as tin, then you, my love, would be darker than sin.”

And it continues in much the same vein. The title track is a vintage Steinman cacophony about danger, sin, revenge, pleasure, love, heartbreak and – apparently – evil (“I’ve been looking for the ultimate crime; infinite victims, infinitesimal time”).

There’s an infectious and pretty much unrecognisable disco cover of The Doors’ Twentieth Century Fox, while the soaring Safe Sex (“there’s no such thing as safe sex when it comes to loving you”) is probably the closest Steinman gets to a standard-issue 1980s power ballad.

The other “hit” on the album (it peaked at No.100 in the UK) is the original English version of Good Girls Go to Heaven (Bad Girls Go Everywhere), which Meat Loaf – Steinman’s best-known musical collaborator – recorded a few years later on the much anticipated sequel to Bat Out of Hell. Rest assured good boys also go to heaven and bad boys also go everywhere, as per the second chorus. 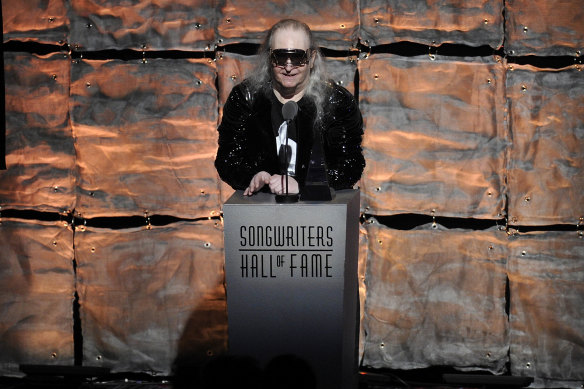 Jim Steinman, pictured in 2012 at his induction to the Songwriters Hall of Fame. He died in 2021, aged 73.Credit:AP

There is a dramatic Steinman monologue (I’ve Been Dreaming Up a Storm Lately) and a few other gems (It Just Won’t Quit) on the way to the big finish: a stunning solo piano overture called Pray Lewd, followed by The Future Ain’t What It Used To Be – an ostentatious epic that builds and falls through all of its 10-and-a-half minutes, including an extended a cappella outro (“toll a bell for the broken-hearted, burn a torch for your sons and daughters”).

So little has been written about this undiscovered gem of a record that a cursory Google search led me straight to a recent article in the University of Winchester’s arts magazine, Splendid Fred. Its editor, Jacob Wingate-Bishop, has a similar appreciation for what he called “the most overlooked moment of Steinman’s career” and “undeniably his magnum opus”. 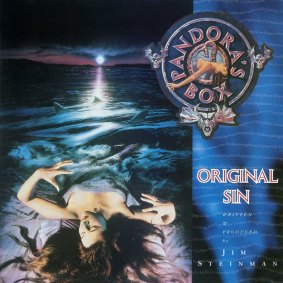 Even the album cover is dramatic.Credit:Virgin

“It’s so over the top, it’s so explosively ’80s,” Wingate-Bishop says. “I love the strangeness and the uniqueness of this album.”

At 22, Wingate-Bishop is much younger than Original Sin. He says his music taste was mostly pre-ordained by his parents – ’70s and ’80s rock – but while his mum adored Jim Steinman, she had “no idea” about Pandora’s Box and their lone, unloved record.

“I guess you can call it the inner hipster in me, but I always have a bit of an interest in albums by artists that don’t do well,” Wingate-Bishop says. “I did read somewhere that it was one of Steinman’s favourite works of his, and I think it’s a shame that it didn’t do as well as he hoped.”

One of Original Sin’s enduring mysteries, encouraged by Steinman, concerns the actual singers on the record. While we know Ellen Foley and Elaine Caswell feature prominently (Foley, a long-time Steinman collaborator, sang opposite Meat Loaf on Paradise By the Dashboard Light), another listed member of Pandora’s Box, Deliria Wilde, probably didn’t exist. Caswell has been quoted describing Wilde as “somewhat mythical, someone Jim Steinman kind of created”.

Wingate-Bishop can’t help but marvel at the enigma. “The mind of Steinman must have been a strange one,” he says.

Yes, Original Sin might be obscure and indulgent and a rough cut of songs that went on to be hits for others. But it’s also a Pandora’s Box – pun very much intended – of undervalued musical genius and a pertinent reminder that, so often, original is best.

[Postscript: if you find and enjoy Original Sin, be sure to check out Nowhere Fast and Tonight Is What It Means to Be Young – the two Steinman songs on the soundtrack of 1980s rock musical Streets of Fire, recorded by Fire Inc.]