Skip the headlines – read a play a day during the election

We've heard barely a whisper about arts policy during the federal election campaign but that hasn’t stopped one group of writers raising their voices in a novel way.

Inspired by Suzan-Lori Parks’ 100 Plays for the First Hundred Days, which was written during Donald Trump’s first months as US president, seven Melbourne playwrights are collectively posting a play a day online as the Australian election unfolds. 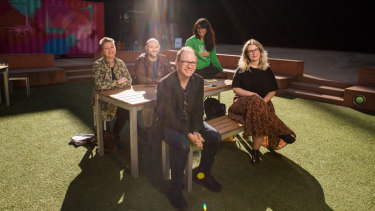 Some of the playwrights taking part in the project include (L-R) Emilie Collyer, Angus Cameron, Ben Ellis,
Vidya Rajan and Keziah Warner.Credit:Jason South

Each an accomplished playwright in their own right, with shows staged variously at the Melbourne Theatre Company, the Malthouse and more, the group is hoping to cut through the repetitive slogans and social media pile-ons with language that is a little more considered and nuanced.

"I think people are hungry for it – a different way of ingesting [information]," says Cameron.

Ordinarily a play can take months, if not years, from when it's first written to when it gets mounted in a theatre. But, says Collyer, it's been refreshing to write short, off-the-cuff material in response to the day's issues.

"It's all done in less than 24 hours so you're pushing something out into the world that has a roughness to it," she says.

"[But] the stories have a potency to them because they're not being smoothed out. I really feel like we're hearing each other's voices in quite an interesting and exciting way. [The plays] make you pause and look again, and that – as an attitude towards life, and certainly towards an election campaign – is really useful."

The writers are hoping The Campaign & After Plays will strike a chord beyond regular theatregoers. As a showcase of contemporary theatre, it's not unlike a short-story anthology – a taster-plate of fiction – only you'd be hard-pressed to find a short-play anthology in your nearest bookshop.

"I think it takes the fear out of [reading plays]," says Collyer. "It's online and takes you two minutes to read, and you go, 'Oh, I totally got that and it made me laugh or made me think something – I could read another one of those'."

The group will continue writing until a few weeks after the election, and then 16th Street Actors Studio, where Ellis is playwright in residence, plans to host a public reading of the works.

In the meantime, anyone is welcome to try their hand at staging a work, says Ellis, because they're currently being offered under a Creative Commons license.

"The idea," says Ellis, "is to make it available and to show that it's a living thing."