Home » Lifestyle » Snap! Photos, letters, a gold chain … the past comes flooding back

There's a box on a shelf at the back of my wardrobe that I rummage through once or twice each decade. In it are photographs, letters, pale blue aerogrammes, a few items of jewellery and the odd declaration of love. Somehow, the contents of this box help me remember who I am, triangulating the position of my soul in the present with glimpses of the man I used to be.

Most of the photographs are from the mid-1980s – almost another world – a place where you waited in line at the pharmacy to hand over film cartridges, then popped back days later to pick up very much hit-and-miss prints. Not for us at that time the ubiquitous phones that document everything we see and feel today. No social media, no computers even; a time when what are now called "hard copies" were the full extent of it. And in these hard copies, some mailed to me years after the fact, I am slim, with voluminous chestnut hair and a boyish, self-conscious grin. 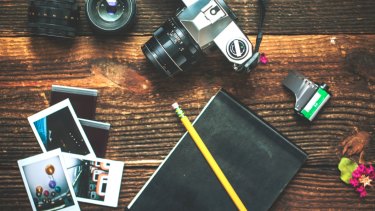 ‘There are the casts of days gone by, the bit players … the great loves of my life reduced to frozen moments in not-very-good portraits.’Credit:Getty Images

And there are the casts of days gone by, the bit players with names long forgotten, and the stars, the great loves of my life reduced to frozen moments in not-very-good portraits.

The letters and aerogrammes chart long-distance romances and also the course of friendships mostly made and lost on overseas holidays, with a few missives trailing on before the correspondence inevitably runs out of puff. "Why have you stopped writing?" asks American divorcee Janine in the last of a series from her. We met on the Greek island of Naxos, and spent a series of days hiking and swimming then sharing stories from our lives in the evenings in cheerful tavernas: her marriage breakdown, my relationships with men, books we loved, music, films, art.

Janine introduced me to the wistful Greek poet Cavafy, who retrospectively helped me understand someone I met at the beginning of my Greek adventure.

Some kind of caul lifts on a young person's first substantial trip alone. Freedom from the prison of work and all previous attachment dawns and it makes you attractive, light and carefree. And so, as one of the appalling ferries that transfer people from Greece's mainland port of Piraeus chugged its way to Naxos, I caroused and danced and laughed and sang with a bunch of similarly freed young strangers.

Unnoticed by me, a man called Hugo had been watching. When the high spirits eventually subsided, he approached me.

"I would like you to have this," he said. In his proffered hand was a man's gold neck chain, the kind he wore himself, the kind many hirsute Greeks wear to highlight the chest thatch.

"I couldn't possibly accept that," I said, soberly.

He looked crestfallen, almost tearful. "It would make me very happy if you would," he said.

"You remind me of someone," Hugo said. "I've been watching you all evening. Like him, you seem so happy, so alive."

With that, he pressed the gold chain into my hand and walked away.

Later, in my cabin, I looked at the necklace trying to weigh up what it meant to him for me to have it, and the fact that I didn't in any way deserve to have it. Hugo was a little unkempt. He certainly didn't look like a man of means. I decided I had to give it back.

I prowled the deck and came across him smoking, staring out to sea.

"I can't …" he began. Then he composed himself. "There's a huge structure near the port in Naxos," he said. "The Portara Apollo temple. Meet me there at 3pm tomorrow."

Resolved, I slept well that night in my cabin. After disembarking next morning, I found accommodation, unpacked and settled in, lunched in solitude and in the afternoon headed off to meet Hugo. I waited. And waited.

Was he remorseful? Did he wake up and think he had been foolish to give such a gift to a stranger? I thought I saw him a couple of times as stocky Greeks walked towards the monument. Invariably, they walked by. By four o'clock, I realised I had been fobbed off. Why should he deliver an account of his most precious experiences to me? Had he reached the line I would reach later with Janine, the line that almost all friendships eventually come to, where it simply seems pointless to continue?

Sitting on my bed all these years later, I carefully put Janine's last aerogramme and Hugo's chain back in the cardboard box. I feel a little sad to have lost them both, but also for today's tech-savvy young people; they have the whole world in their pocket, but unless they meticulously back up images and messages as phones perish, drives crash and media transforms, what will they have to moon over 30 years from now?

To read more from Good Weekend magazine, visit our page at The Sydney Morning Herald, The Age and Brisbane Times.