Still hold a flame for gas? Going electric can save up to $1900 a year

Ingrid Jolley and her family were lucky: when their ageing gas hot water tank started to fail, they had a short grace period to research the electric alternatives. And it ended up saving them money.

In an emergency, they might have panic-bought another gas heater. But with time on their side, they decided to install an electric heat pump and 3.7 kilowatt rooftop solar panel system for their Northcote home. 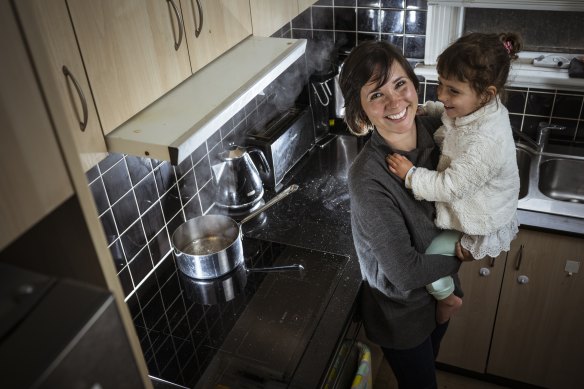 Ingrid Jolley, pictured with her daughter Hazel, has converted all of her home’s household’s gas appliances to electric.Credit:Chris Hopkins

“We were aware of the climate and environmental concerns associated with domestic gas, and it felt like the perfect opportunity to switch to something cleaner,” said Jolley.

Home owners in Australia’s capitals could save between $500 and $1900 a year on their electricity bills by replacing gas heating, cooking and hot water appliances with electric alternatives, according to analysis from the Climate Council.

The switch from gas to electricity could also significantly improve a household’s greenhouse gas emissions in most states, it found. Its calculations showed that savings were possible even for those relying solely on electricity from the grid, rather than solar panels.

The Climate Council, an organisation that advocates to reduce greenhouse gas emissions, wants governments to help Australians get off gas by providing low or zero-interest loans to help with the upfront costs of replacing appliances.

It has developed a calculator (below) to estimate the savings when switching from one, or all, gas appliances.

Dr Carl Tidemann, a lead author and senior researcher on the report, said: “In the middle of a national cost-of-living crisis, getting gas out of homes is a smart and simple way for Australians to save hundreds, if not thousands, of dollars a year. Gas prices won’t fall any time soon.”

How much could you save?

The biggest bill savings were found to be in Brisbane, where gas is significantly more expensive than other capital cities, and in Hobart and Canberra because of their colder climates, Climate Council researchers found.

Being connected to the gas network, even if you do not use gas, can cost hundreds of dollars a year in daily supply charges, with the most expensive annual bill being $280 for Melbourne residents, the report says.

The wholesale price of gas has almost tripled since last year, with 80 per cent of supplies shipped overseas, and Australian prices tied to a volatile international market. 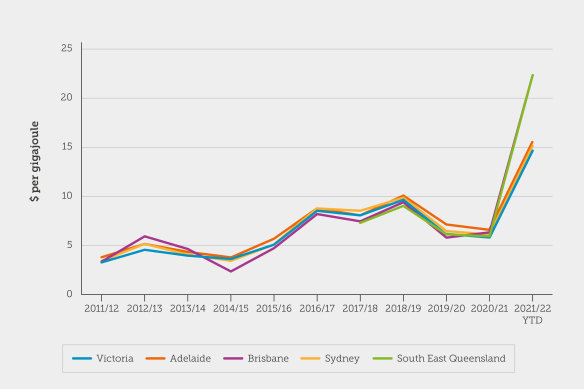 Australian households meet their energy needs through a combination of different fuel sources, and piped gas accounts for almost 40 per cent.

In Victoria and the ACT more than half of all energy used in homes comes from piped gas, while in Tasmania and Queensland, the use of residential gas is very low.

How it was calculated

The total bill savings were calculated by combining heating, cooking and hot water bills per year for an example household using gas appliances (including daily connection fees) and comparing these with the combined bills for a household with electric appliances at the same level of use.

Saul Griffith, the author of The Big Switch and the head of Rewiring Australia, said his organisation carried out a study last year that considered the full electrification of Australian houses, including vehicles.

“If we redid the analysis now, those numbers would be higher,” Griffiths said. “Of course, you have to power that with renewable electricity, but that is now cheaper than coal.”

What about the cost?

There are, of course, costs associated with switching from gas appliances. Some purchases, such as rooftop solar and electric appliances, should be viewed as an investment because they could make such significant savings that the upfront cost was effectively “paid back” over time, the researchers said.

They calculated two payback scenarios: the first based on someone buying lower-priced electric appliances, at a cost of $7800; and the second based on higher-priced appliances, at $14,900. Both scenarios included $3000 for installation costs.

In Melbourne, this would take eight and 12 years respectively, while in Sydney it would take 13 and 16 years.

Once Jolley and her family installed the electric heat pump, they decided to turn off their ducted gas heating and rely on electric panel heaters, and later, an induction cooktop.

Jolley has calculated that her family saves about $100 a month in energy costs, despite now having another child and she and her partner now working at home. Their transition was helped with a low-interest loan through the Victorian government’s Solar Homes scheme.

As well as taking these steps at home, Jolley has hosted climate information sessions, talked to her local member of parliament about her concerns and joined environmental campaigns.

“There are many ways we can engage with to try to soften the blows of climate change,” she said.

Get to the heart of what’s happening with climate change and the environment. Our fortnightly Environment newsletter brings you the news, the issues and the solutions. Sign up here.