The Reserve Bank could be forced into lifting interest rates much earlier than expected after new figures showed the jobs market roaring back to life as more than 100,000 people found work across NSW and Victoria.

In figures that surprised markets and the federal Treasury, the Australian Bureau of Statistics reported the jobless rate dropped 0.4 percentage points to 5.1 per cent in May. It was last at that level in February last year and was driven by a 115,200 increase in total employment of which 97,500 were full-time jobs. 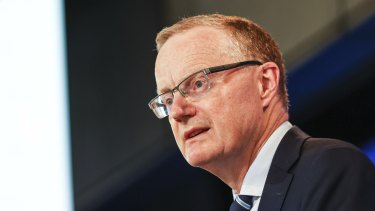 The national underemployment rate dropped to 7.4 per cent, its lowest level since January 2014.

The overall result was built on the back of a 75,200 jump in the number of people working in NSW with almost 65,000 of them full-time. Victoria added another 31,400 full-time jobs.

The national underemployment rate dropped to 7.4 per cent, its lowest level since January 2014. Among the states and territories, unemployment fell by 0.7 percentage points in both Victoria and Queensland.

“What these numbers should do is give Australians confidence that there is light at the end of the tunnel,” he said.

The figures were released after Reserve Bank governor Philip Lowe, in an address to the Australian Farm Institute Conference, said despite a V-shaped recovery there were no signs yet of a lift in wages.

He said the post-global financial crisis mining boom, during which the Australian dollar was worth more than its US counterpart, had led many businesses to maintain a “laser-like” approach to keeping a lid on wages.

“This experience has left a lasting imprint on many businesses and it has reinforced the narrative about the importance of cost control,” he said.

Dr Lowe said the RBA would only move on interest rates when the jobs market was tight enough to drive wages growth to a rate “materially higher”. The bank has previously suggested the earliest it will move on rates is 2024.

But ANZ senior economist Catherine Birch said the jobs figures suggested an increase could be on the cards much earlier.

“Our latest forecasts have the RBA lifting the cash rate twice in the second half of 2023 to 0.5 per cent. But if the labour market continues to tighten at this rate, triggering an earlier, stronger acceleration in wages growth and inflation than we have factored in, this timetable could be brought forward,” she said.

The strong jobs figures bolster the independent pay umpire’s decision on Wednesday to give Australia’s lowest-paid workers a wage rise.

Woolworths went out in front of other major retailers, announcing it would give its staff the pay boost earlier than the mandated September deadline for the retail industry.

The Fair Work Commission gave most workers their 2.5 per cent pay rise, which equates to $18.80 a week for a full-time worker on the national minimum, in July but delayed it until September for the retail industry. It will be November for other sectors hurt by the pandemic, such as travel and fitness.

The 135,000 staff working at Woolworths and Big W will get the 2.5 per cent bump to their pay next month. Its pay rates are already a little above the minimum.

“Our frontline team members have done an extraordinary job for our customers and the community throughout the pandemic,” Woolworths supermarkets director Natalie Davis said.

Last year the company tried to delay its workers’ pay rise in line with the pay umpire’s decision but relented in the face of legal action from the union.

Other companies, including Coles and Bunnings, have not committed to an early pay rise.

“Coles team members are employed under enterprise agreements which are already paying above relevant current award rates,” a spokesman said. It will review the wage umpire’s decision. Bunnings’ HR boss said it also paid above the minimum and reviewed pay annually in September.

“Major retailers and supermarket chains increased their profits during the worst of the pandemic in 2020 and that trend is continuing as the recovery gathers pace with many revealing record results this year,” Mr Dwyer said.