It begins in 1953 when five-year-old Robert stops baby Angela crying by lending her his teddy bear.

“How cute!” any moderately doting adult might think but the pair’s Italian-Australian parents go further. To them, it’s a sign. Fans of arranged marriages, they immediately decide their children are made for each other.

It seems writer-director Nick Conidi is working from experience here. In 1969, when he was nine, his father began to nurture the thought he should grow up to marry the daughter of one of his friends. Then came the sexual revolution and the tradition was swept away. 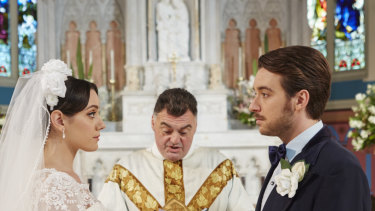 Angela (Antoinette Iesue) and Robert (Daniel Berini) seem destined for each other in Promised.Credit:Jesper Nielsen

So in this story, he turns back the clock a few years to catch this venerable institution when some Italian-Australian parents were still trying to make it work. By 1974, Angela (Antoinette Iesue) is at university, hoping to become a writer, and Robert (Daniel Berini) has just returned from Oxford with a law degree. Her adolescent crush on him has waned and she’s decided she’s in love with someone else. Nonetheless, her father still has hopes.

And we’re not encouraged to share her enthusiasm for the new boyfriend. Even by the sartorial standards of the 1970s, Tom (Santo Tripodi) looks dodgy, with a faux leather jacket and a conman’s moustache. Robert, on the other hand, is charming, smart and easy-going and gives every sign of believing marriage to Angela might be a good idea.

In other words, Promised is as old-fashioned as its theme. Although Angela is reading The Female Eunuch, her own ambitions as a writer are concentrated on romantic fiction and Conidi looks to be following the same example. Tom is shaping up as a classic Mills & Boon bad boy while Robert is clearly the kind of man a Mills & Boon heroine falls for when good sense finally kicks in.

He has one flaw, however. He seems loath to go up against his bulldozer of a father, who’s known fondly to all his friends as the godfather because of the influence he exerts on everybody around him.

To its credit, the film resists any temptation to do a Fat Pizza and make a cartoon out of Italo-Australian customs and attitudes. Cast as Angela’s father, Paul Mercurio pulls back before his performance can tip over into caricature and Tina Arena, as her mother, works hard to maintain her role as the voice of reason.

It’s not a particularly stylish film. The lighting is flat and the script struggles towards the end in coming up with stratagems to delay the inevitably happy ending but there’s a simmering good humour to it and a sense of reality that turns its ordinariness into a virtue.