Home » Lifestyle » Texas man killed by police was shot in the back, civil rights attorney says

A southeast Texas man killed by police last week was shot in the back, according to an autopsy commissioned by the family of the slain man. The results of the independent autopsy in the death of 22-year-old Joshua Feast were announced Wednesday evening by national civil rights attorney Ben Crump, who is representing the family.

Crump called for the firing of the La Marque police officer who opened fire, Jose Santos, and the immediate release of bodycam videos. Investigators have said Feast pointed a gun when Santos tried to approach him about an outstanding felony warrant on December 9, but Crump said Feast posed no threat and was shot while fleeing.

“He was a defenseless man who was running away,” Crump said. “There was no reason for [Santos] to shoot and kill this young man, who had only turned 22 three weeks ago.”

Crump said the autopsy results, which showed Feast suffered a single gunshot wound to the upper right back, were consistent with the accounts of witnesses. Neighbors tell CBS affiliate KHOU that Feast was running away when he was shot in the southeast Texas town of La Marque, outside Galveston. Witnesses said Santos yelled Feast’s name but didn’t instruct him to stop or put his hands up until after he was lying on the ground, according to Crump. Crump said Santos kicked the man after he shot him, citing a witness account.

Galveston County Sheriff Henry Trochesset, whose department is investigating the shooting, told CBS News that investigators told him video of the incident shows Feast pointed a gun at the officer. Trochesset said the officer had approached Feast because he was wanted on a warrant for being a felon in possession of a gun.

Trochesset said he had not seen the video, but that it was his understanding Feast was running toward officers with the gun before turning and fleeing. He said the video was being enhanced as part of the investigation to determine exactly what happened, and that investigators were in the process of collecting more video and witness statements. 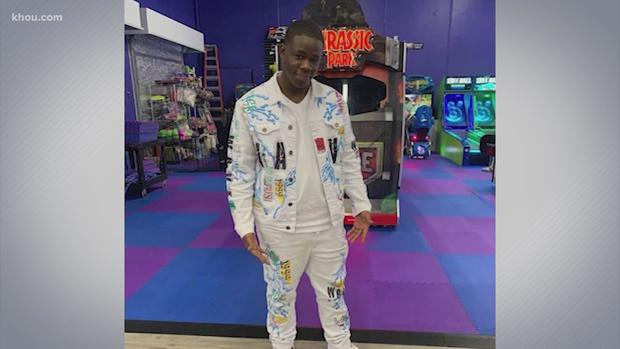 Trochesset said Feast dropped a 9mm weapon in the roadway and that EMS workers found a .45 pistol in Feast’s clothing. He said the video would not be released because it is evidence in the ongoing probe, the results of which would be turned over to the Galveston County District Attorney’s office.

Crump said he’s filed a request with the Trochesset’s office to release the results of the official autopsy and to show the family the video.

Feast’s mother, Lakeisha Feast, said she wants to see the video before her son’s funeral on Friday for her own “peace of mind.” Feast was a father of two toddlers, and Lakeisha Feast spoke holding Feast’s young son, Josh Jr.

“I just feel like my son shouldn’t be dead and the officer should be held accountable,” Feast said. “My grandkids should still have their father here. It’s very hurtful.”

Crump has said Santos is the same officer seen in a video showing a different incident during a 2013 arrest in Galveston in which a group of officers is seen beating and kicking a Black man and holding his head underwater along a beach. CBS News has not confirmed that Santos is one of the officers in the video. Crump said Santos was working as a Galveston police officer at the time, and a federal lawsuit filed in 2014 over the incident names Santos as one of the defendants. Santos denied allegations of excessive force in the lawsuit, which was later dismissed.

Santos resigned from the Galveston Police Department in December 2013, according to the Galveston County Daily News, but a department spokeswoman didn’t have a reason for the resignation.

Crump said the 2013 incident should have precluded Santos from being hired at the neighboring police department.

“If they would have taken his gun and badge away from him after what he did in 2013, Joshua Feast would have been here today,” Crump said at a Wednesday press conference.

The La Marque police department did not return a request for information about Santos’ employment from CBS News.