Teyana Taylor discusses her home births and more in a new interview!

Teyana Taylor gives it her all in anything she does. So, it’s no surprise that the singer (actress, dancer, director — the list goes on), 30, is one of the hardest-working stars in Hollywood. But none of her accolades come close to when she gave birth to her two daughters — Iman “Junie” Tayla Shumpert Jr., 5, and Rue Rose Shumpert, 6 mos. — at home in her bathroom, without any hospital staff. Both girls made unexpected entrances, which played an obvious part in their mom’s unplanned deliveries.

“Listen, I’ll get scared [going to the bathroom],” Teyana joked during an exclusive interview with HollywoodLife while discussing her new partnership with Olay. “Right after giving birth, I was going to the bathroom and I’m like, ‘Oh, is my water going to break? Oh wait, I had my baby yesterday,’” she recalled about her second delivery with baby Rue, who arrived on September 6, 2020, just one day after Teyana’s baby shower. “All in all, it was amazing and a beautiful thing,” she said, adding, “It was scary at the time, but so beautiful.”

When asked about a having a potential third child with husband Iman Shumpert, Teyana said, “Girl, listen, two and done, you hear me!” She joked, “I gotta give this [vagina] a break, there’s like shoulders coming out of there, OK! I have tattoos that aren’t done. Imagine God telling you, well you’re about to have this baby, you can’t push her back in there so it’s now!”, she continued.

“Listen, my babies are at the point where they’re like, ‘Oh Junie had her entrance, I’m coming that way too, I’m coming early, I’m coming right where you’re at, I don’t care where you’re at,’” Teyana said about Rue’s unexpected arrival. “I just feel like my kids are that level of petty that none of them are going to let me make it to the hospital. But I think for now, two is enough. I got through it, but it was an experience for sure.” 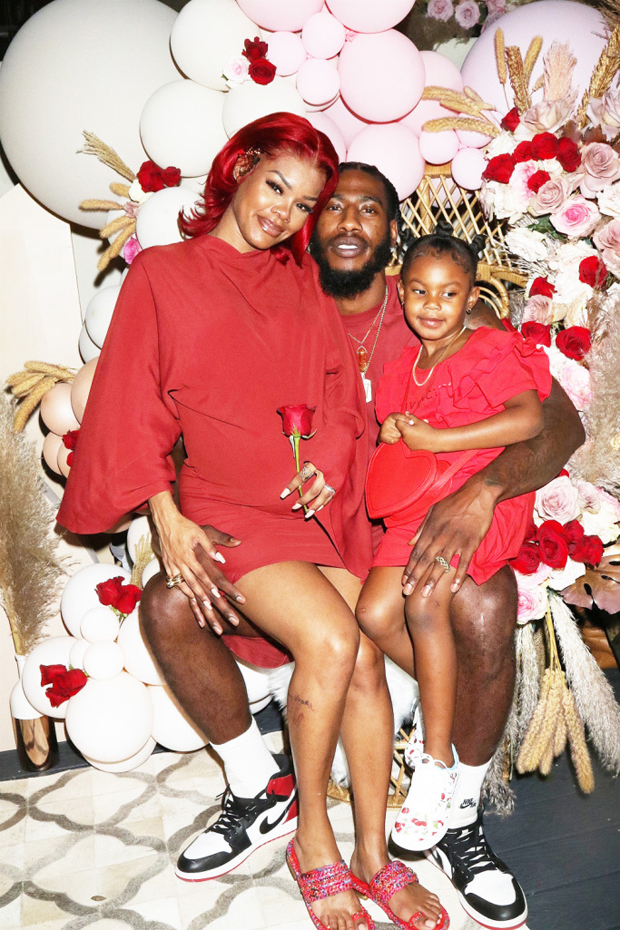 Teyana went on to discuss how her two daughters are polar opposites. “Junie is everything and everywhere and all over everything,” she said, explaining, “It’s crazy because Junie is a Sagittarius and Rue is a Virgo and they’re completely different — Junie’s turnt and Rue is just chillin but I love that, because you can tell when they get older, they’re going to be each other’s perfect balance.

The budding filmmaker, who’s been “grinding” at her Atlanta production studios, noted that her daughters are the reason she isn’t fazed about any negative chatter on social media. “Kids change everything. To see the obsession my kids have with me is amazing,” she said. “Rue can’t talk to me, but the way she looks at me makes me feel like the most beautiful girl in the world. And, the way Junie handles me, she tells me I’m the most beautiful person in the world. — That’s the purest form of an opinion you’re going to get,” Teyana continued, noting, “With that, I could never see any social media or Instagram comment that will bring me down, I could never allow anybody to bring me down because I have the purest form of any opinion right in front of my face.”

HollywoodLife caught up with Teyana amid her new partnership with Olay to promote the beauty brand’s new Body Collection — which includes Olay’s Nighttime Rinse-Off Body Conditioner and Cleansing & Renewing Body Wash with retinol.

“It’s so good and soft! You already have the nighttime body wash and to top if off with the nighttime body conditioner — it’s crazy,” Teyana said about her go-to moisturizing products. “I like putting on all my stuff after the shower: the condition, let it sit for a while and rinse off. I can literally pat dry and my skin is fine, I don’t even need moisturizer,” she said, adding that Olay’s new nighttime duo is perfect for those who like a convenient “one-stop shop” skincare routine. “It has retinol and it’s a game changer for me,” she said. “It keeps everything nice, young and tight!”