The Camberwell bridge that cyclists want, and critics warn could cost $30 million

The electorate of Hawthorn has some of the city’s most impressive transport connections: five tram lines, three railway lines running through it with 11 stations, and another busy railway line on its southern border.

The electorate also has a very active bicycle user group – such groups exist all over Melbourne, but Hawthorn’s is vocal and pushes hard for upgrades. 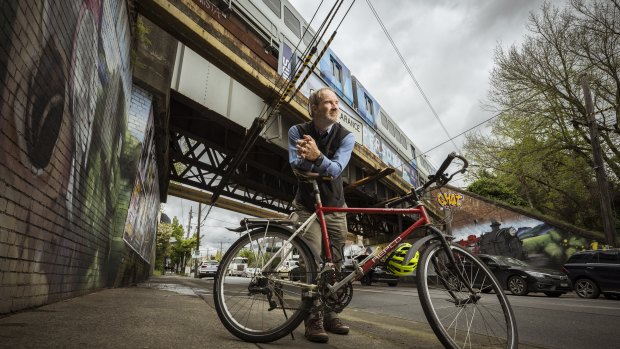 And in this wealthy electorate, active transport is a big issue that all sides of politics are keen to support.

At this month’s state election, after a decade of back and forth with the local Boroondara Council and the state government, there is one item on the local cycling group’s list that has been put squarely onto the election agenda: a rail bridge on the Anniversary Trail.

But cyclists who use the path are forced to stop dismount at Toorak Road, Camberwell, and walk up and down complicated, steep paths to stay on the route. “It’s quite disruptive for cycling, but it’s also quite unsafe,” Campbell says.

The bicycle group has been lobbying for the project since 2012 and, after years of pressure, Boroondara Council in 2018 costed the new path at $4 million.

Liberal candidate and former Hawthorn MP John Pesutto has pledged $8 million towards the bridge if he and the Coalition win office. The teal candidate for Hawthorn, Melissa Lowe, in a rare specific local promise, wants to see the bridge built as well.

The Labor MP for the area, John Kennedy, though, says the problem is far more complex than just building a bridge. He has backed a review of the bicycle crossing project now being done by the Department of Transport, with four options included.

Kennedy is friends with former Labor MP for Burwood Bob Stensholt, whose Glen Iris house is just metres from the cycling path. Stensholt and his neighbours would lose a line of trees protecting them from railway noise if the cycling and walking bridge were built.

As treasurer of a local resident and traders group, Stensholt said on Monday he would support an improved cycling path, but not where the council and the cycling group want to put it.

And far from the $8 million the Liberal Party says the bridge will now cost, Stensholt says $20 million is more likely. In October, he even posted on social media that it would cost as much as $30 million.

“I don’t think it’s tiddlywinks,” he said. “I think it’s quite a lot of money.” Stensholt said that money should be spent “in Kalkallo”, not Camberwell.

The cycling bridge is one of four major projects the Boroondara Bicycle User Group wants to see built by whoever wins the election on November 26.

Until election day, The Age is reporting closely on Hawthorn, where Labor, the Liberals, a teal and the Greens are vying to win. What happens in the seat will signal whether the revolt against the major parties seen at May’s federal election – when eight independents were elected to the lower house – will flow onto state politics.

As part of that coverage, the bicycle group’s spokesman Peter Campbell took The Age on a cycling tour of the electorate to highlight the projects it wants funded – including the Toorak Road bridge.

Also on the group’s list of urgently needed improvements is to the Gardiners Creek cycling trail, which runs right through the eastern suburbs into the CBD and is among Melbourne’s most used biking routes.

An underpass on the trail floods regularly, creating a bog that many cyclists have sustained injuries on. The group wants the state government and Melbourne Water to build a retaining wall to stop the flooding. After it rains, says Campbell, the path becomes “a sea of mud”.

The group is also asking, in the long term, for another bicycle bridge over the Yarra in Hawthorn, which would ultimately form part of its most ambitious ask: a cycling trail from Hawthorn to Box Hill.

In 2020, VicRoads did a feasibility study on the project, but the community is yet to hear whether it will be built.

This story is part of our in-depth local coverage of the key seats of Hawthorn, Melton and Richmond at the November state election.