The five graphics that explain the State of Environment Report 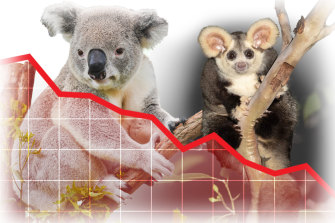 The koala and gang-gang cockatoo are among the 200 plants and animals that have been added to the threatened species list since 2016, warming air and ocean temperatures, more extreme weather events, loss of native vegetation and poor access to water in Indigenous communities are just some of the grim findings in the latest State of Environment report.

The only tiny sliver of hope is that emissions from the electricity sector have declined since 2016 and renewables have grown.

Here are five graphics that explain the state of our environment and the report.

Australia’s land and sea support more than 600,000 native species – many of which are found nowhere else in the world. But since 2016, more than 200 plants and animal species were added as threatened species to the government’s list – these include the koala, the gang-gang cockatoo and Watson’s Tree Frog.

This number is expected to grow in the coming years following the 2019-20 bushfires. The sharpest increase has been in invertebrates and frogs, followed by reptiles and birds.

The biggest threat to Australia’s native animals since colonisation are introduced species. There are more than 200 invasive species that threaten Australia’s biodiversity, among them includes the European rabbit – which impacts 325 threatened land species, while the feral pig and cat both impact more than 100 threatened species.

The other significant threat facing Australia’s biodiversity is habitat loss and clearing. More than 7 million hectares of habitat for threatened species was cleared or substantially degraded between 2000 and 2017.

The report found the mammals considered most at risk from extinction in the next 20 years mostly occur in northern Australia and south-west Western Australia. They include the central rock‑rat, the northern hopping mouse, the Carpentarian rock‑rat and the Christmas Island flying fox.

Australia’s land and ocean temperatures have warmed by a mean of 1.4 degrees and 1.1 degrees since records began. We’ve already experienced our warmest year on record in 2019 and our warmest decade (2011 to 2020). If that’s not enough, every individual year from 2013 to 2020 ranks in the 10 warmest on record nationally.

Meanwhile, rainfall has decreased since 1970 in southern Australia. Over the same period, rainfall has increased in north‑western Australia. The report notes that climate change is expected to worsen these factors – leading to more intense and frequent weather extremes, including bushfires, droughts and floods.

The Black Summer was one of the worst fire seasons on record. More than 17,000 hectares were burnt, between 1 to 3 million animals were killed or displaced, and 33 people died. The fire season increased the extinction risk of many animals and plants – with more than 480 threatened plants, 20 mammals and 16 frogs now needing urgent management intervention after the fires. The above graphic shows how the season stacked up compared to others.

Sea level rise at Australia’s coastline is above the global average of 3 to 3.5 millimetres per year, with some areas seeing 4-6 millimetres in the same time frame. The reports note that this will have serious impacts for coastal erosion, movement of beaches and low-lying areas, and Indigenous communities are the most vulnerable.

Australia contributes approximately 1.2 per cent of global emissions, placing us among the top 15 total emitters.

Emissions from the electricity sector have decreased since 2017 due to the uptake in renewables. Despite a dip in transport emissions in 2020, driven by the COVID-19 pandemic, we’re already seeing these figures bounce back rapidly.

Meanwhile, emissions from land use and forestry have increased since 2017.

Our environment is in pretty bad shape, so here’s a look at what’s being done about it. Since 2010, the report notes that biodiversity expenditure has remained below $400 million since 2018. While there was a significant one-off investment made to the Great Barrier Reef Foundation, funding for core projects has decreased, the report notes.

“National Landcare Program funding has decreased, there is no longer funding for new national reserves, there have been cuts to biodiversity research at CSIRO, and the national Climate Change Adaptation Research Facility was discontinued in 2019,” the report said.

Despite innovations in technology and conservation, the report also notes that national strategies and investments do not match how rapidly our environment is declining. It calls on the need for leadership across all levels of government, community and non-government, stronger climate action and greater financial investment if the country has any hope of safeguarding its future.

A guide to the environment, what’s happening to it, what’s being done about it and what it means for the future. Sign up to our fortnightly Environment newsletter here.