The new Nalgene Sustain bottle looks the same, but it’s completely changing the future of recycling 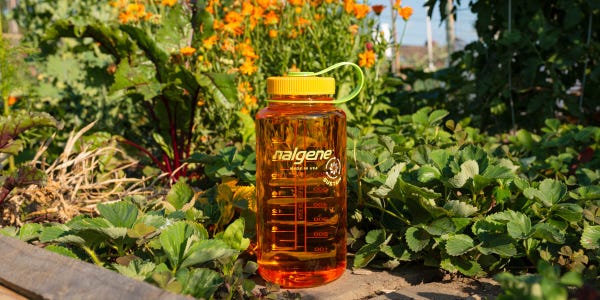 The "reuse, reduce, recycle" mantra has been around for years, but now one iconic company is taking it to the next level: For the first time ever, Nalgene Outdoor is using a revolutionary technology to make an already-reusable product from 50% recycled goods.

Ever since Nalgene Outdoor created the reusable water bottle category 71 years ago, the iconic brand  has led the way in the "refill not landfill" march. But with the launch of the new Nalgene Sustain water bottle line in August, sold online and at REI, the company has taken innovation a step further by creating the first water bottle made by rescuing single-use plastic from landfills and repurposing recycled waste into reusable, refillable bottles.

"There's much more put into recycle bins than is able to be recycled," Elissa McGee, general manager of Nalgene Outdoor, says. "We're trying to reduce what's being sent to landfills or, even worse, the floating islands in the ocean," which grow by 14 million tons of plastic annually.

In fact, each Nalgene Sustain bottle is made from the equivalent of eight single-use water bottles that could otherwise join the 5.25 trillion pieces of plastic currently floating in the ocean.

Very often when people buy recycled goods, they resign themselves to some kind of physical or functional compromise.

"You expect the aesthetic to look different. If you're getting a notebook that's from recycled paper, it probably won't look glossy and white, but kind of brown," McGee says.

But rather than undergoing a redesign to signal its substantial change, Nalgene has operated under the long-held belief, "if it ain't broke, don't fix it." And since Nalgene bottles are virtually impossible to break — and people have really tried — there wasn't an impetus to revamp a cult classic. It was crucial that a bottle made from recycled goods didn't compromise on size, durability, or any of functions that have made it a worldwide favorite.

"We're so used to making trades when we're choosing to do something more sustainable or more environmentally conscious," McGee says. "It's like, 'OK, in order to do the right thing for the future, what am I willing to give up?' And with Nalgene Sustain bottles you're not doing that."

Although the material used to make up the new Nalgene bottles is sourced differently, there is no difference to the naked eye, but rather through a microscope lens.

Nalgene Sustain is the first water bottle line on the market to use Eastman's Tritan Renew technology, and is made through "chemical" or "molecular" recycling. That means that the recycled plastic waste is safely broken down to its most basic building blocks and reconstituted, essentially becoming new again while maintaining its original properties.

"If you tested a Nalgene Sustain bottle, it would test identically to the original Nalgene bottle – durable, leak proof, nearly shatter-proof. It delivers on all of those promises," McGee says. "You can throw it in the dishwasher. It's the same hardworking bottle that you love, now more sustainable."

But it's not just what's inside or how it performs that matters, it's also where Nalgene Sustain bottles are made that helps benefit the earth like no other. The entire bottle – like all Nalgene bottles — including the materials its made from are manufactured, transported by truck and train, and assembled in the US. Sourced in Kingsport, TN and manufactured in Rochester, NY, Nalgene bottles offset the use of fossil fuels and lower the greenhouse gas emissions necessary to ship from overseas.

"We are really focused on doing the best that we can do, and there is so much more that's controllable, and your carbon footprint can be so much smaller when you're locally sourcing things," McGee says. "It's the same thing as going to the farmer's market and buying your veggies down the street."

Refilling a reusable water bottle is an immediate reduction in waste and in one's carbon footprint. But choosing a water bottle that is uniquely sourced and produced in the USA, rather than its competitors that outsource production by flying materials around the world, significantly multiplies these benefits.

"Knowing that we are able to keep that carbon footprint small is important to us," says McGee. "It is where we have come from. It's a level of quality control that we believe in and it's central to our DNA. We've always been Made in the USA and we will continue to be."

Although Nalgene has been around for more than seven decades, its functional, and now more sustainable, design resonates — particularly at a time when people are scaling back and embracing comfortable, especially as work-from-home scenarios become the norm. The ease and convenience offered in the simple, dishwasher-safe Nalgene design makes it a functional must-have item, now more than ever.

"There's so much to stress about nowadays, you don't need to spend time worrying if your water bottle is good for the environment or needs a special brush to clean it," McGee says, adding that in times of pandemic, disinfecting is key. "We already have too much on our to-do list."

Click here to purchase a bottle from the new Nalgene Sustain line.

This post was created by Insider Studios with Nalgene.