Prime Minister Scott Morrison has unashamedly flicked the switch to election mode, getting out and about this week in Melbourne and spruiking his credentials as a new-fashioned climate convert. Despite his disastrous trip to the Glasgow summit and widespread criticism of his net-zero policy’s paper-thin detail, he is sticking to his “technology not taxes” mantra to reduce carbon emissions. Yesterday he ramped up the rhetoric further, adding a new phrase, “can-do capitalism”, to try to set entrepreneurialism up against government intervention, as if they are mutually exclusive.

But Mr Morrison’s newfound enthusiasm for talking climate is likely to be short-lived. He knows he needs to have a policy, but does not want to be trapped by any of its messy detail. And he will not want to talk about it for too long. As soon as it feasibly can, the Coalition wants to switch the debate to the safer ground of the economy as the election, expected some time early next year, draws closer. 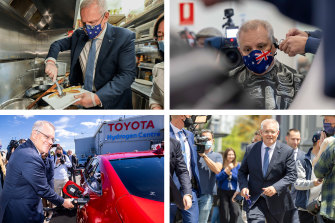 This week, Treasurer Josh Frydenberg laid out his case, arguing the government’s pandemic support programs had prevented “economic armageddon”, and that despite dire predictions, unemployment had not ballooned, a normal consequence of a recession.

With pent-up demand and, for the lucky ones, a strong “wealth effect” generated by skyrocketing house prices and a stockpile of personal savings resulting from extended lockdowns, there is good reason to believe the economy will rapidly bounce back in coming months. The Coalition will want to take full credit for this.

But if the experience of other major economies emerging from the pandemic is anything to go by, it may not be all smooth sailing. The unusual circumstances of the pandemic-induced recession – in which the global economy was shut down by government decree, not by an economic calamity – has thrown up some unexpected challenges as nations come back to life.

America is a case in point. While many economic indicators are coming back strongly (more than 500,000 jobs were added in October), there is also growing concern about a range of economic headwinds. The most notable has been supply-chain issues triggered by shipping delays and a shortage of truck drivers. Along with a spike in global energy prices, this has fuelled an increase in inflation to levels not seen for decades. Disruptions have also been brought on by widespread labour shortages and what is being called “the great resignation”, with a record 4.3 millions Americans quitting their job in August.

America is not alone. China’s economy, which had initially come out of the pandemic strongly, is under growing stress. Rising energy and food prices, and the return of lockdowns are spooking Chinese consumers. There are also growing fears that the financial troubles of one of its largest property developers, Evergrande, will spread to others in the sector, possibly triggering a collapse in house prices.

As Australia finds its feet again, it is not immune to some of these economic forces. Although the Reserve Bank is expecting inflation to stay sluggish, and interest rates to stay low until 2023, a recent ANZ-Roy Morgan survey showed consumers are preparing for an acceleration in prices.

Australia is also not exempt from the global shipping bottleneck, exacerbated locally by thousands of Victorian truck drivers leaving the industry due to strict COVID-19 testing regimes and vaccine mandates. The shutdown of migration during the pandemic has given rise to Australia’s own labour shortages.

These forces combined are not substantial enough to significantly disrupt Australia’s recovery, but could put some speed bumps in its way. The Morrison government has made serious errors in its handling of the pandemic. It will hope the electorate can forget these things amid relief at newfound freedoms and strong economic growth. It must expect, though, that the economic ride might be rougher than it would hope.