The X factor: from fashion to art, collaborations are so hot right now

When fast-fashion brand Uniqlo released a $250 boxed set of five soft toys last year, one Melbourne store sold all of its allocated 250 boxes before opening time. The toys weren’t for children; they were Sesame Street characters, reimagined by an American artist for a limited-edition range for grown-ups.

There’s never been a better time to be a brand. Collaboration – an artist cross-pollinating with a brand, or two brands working together to create a one-off "collab" or "X" product – is the hottest trend in design and marketing. Everyone from the world’s top art galleries to the fastest of fashion houses is doing it, and the weirder the mix, the better. Uniqlo’s collaboration mixed Sesame Street’s retro appeal with the modern kudos of Kaws, a US-based artist and former culture jammer, real name Brian Donnelly, whose trademark is replacing pop culture characters’ eyes with a dead-looking cross – an "X". 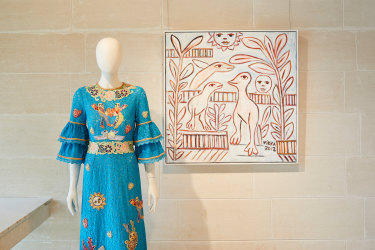 Melbourne fashion brand Gorman has been collaborating with local artists for 10 years, working their designs into fabrics. In March, it staged a retrospective showing of its collaborations at the Heide II gallery, and much of its 2019 offerings are "X" collections, complete with limited-edition "drops" – sets of products released on a single day.

When the National Gallery of Victoria was looking to find an unpredictable way to "animate" the works of graphic genius M.C. Escher last year, it called in Japanese design studio nendo. The resulting exhibition – half art show, half adult play space – was a hit with Melbourne gallery-goers; 297,000 people attended. 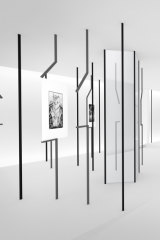 The pastiche-meets-pop-up appeal of "X" works particularly for younger people, who have grown up with the post-modern habit of borrowing ideas from everywhere.

Youth clothing brand Supreme is a success story founded as much on its ability to cross-pollinate with other brands as any design chops of its own. It doesn’t have an Australian store, but there’s a healthy resale market for its products here, fuelled by Instagram marketing.

Kaws, who has a solo show opening at the NGV in September, offers his commercial collaborators a similarly broad cultural reach: his appeal goes all the way from the $50 Elmo and Big Bird toys to selling a painting at Sotheby’s for US$14.8 million – the price paid this year by a Japanese designer and collector. The painting depicted the cast of The Simpsons (a show woven from cultural references), posing as figures from the cover of the Beatle’s Sgt Pepper’s Lonely Hearts Club Band, with "X’s" for eyes, of course.

Collaborations such as Supreme’s and Uniqlo’s offer young consumers something unique and limited – many of Supreme’s "X" products can only be bought in-store, by people who have sometimes queued for hours. It’s a narrative of constant change – there’s always a new product coming out – and of insider knowledge.

It’s also wildly profitable: the "Yeezy effect" is said to have turned Adidas’ fortunes around since Kanye West began collaborating on limited-edition sneakers: some of the $250 sneakers have resold for as much as $5000.

Collaboration fever is at such a pitch that matchmaking services have sprung up: Sydney-based startup Collabosaurus has about 5500 clients on its books and is growing at about 200 a month. A little like Tinder for brands, the company’s site allows commercial operators, creatives and anyone else looking for a little X action to fill in fields saying what they have to offer and what it is they’re trying to do; with luck they’ll find a like-minded business.

Ruhfus says collaborations take on a life of their own, adding up to more than the sum of their parts. They can be "wacky and bizarre", attracting media attention, or they can create a sense of urgency with that "limited edition" tag.

"X" isn’t only for the high street: in high art the mix of concepts can lend works new interest and relevance.

The NGV’s Escher X nendo exhibition followed its Baldessin/Whiteley: Parallel Visions show, which combined works from two distinct but contemporaneous artists. The trend continues in May, when the gallery pairs millennia-old terracotta warriors from China with bespoke works by contemporary artist Cai Guo-Qiang. In December, iconic New York artists Keith Haring and Jean-Michel Basquiat will be paired for the first time when the gallery launches its Crossing Lines exhibition. 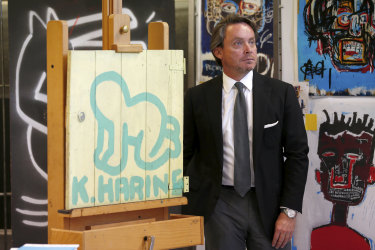 NGV director Tony Ellwood says the collaboration trend is not a conscious strategy. "We’re not doing it because we’re thinking we need to get young people," he says. "We’ve got young people in really good numbers these days. What does drive it is: 'how do we make contemporary design relevant to a broad community?'"

The usual approach to showing art in museums is to be conservative and safe, Ellwood says, but the gallery is trying to find "new and fresh" ways to frame art and world treasures such as the terracotta warriors, which were last shown in Melbourne in 1982.

"We thought: what would have been unthinkable at that time? And we think it would have been a very contemporary voice sensitively reinforcing key themes about location and history of where the warriors were from and that’s what Cai has done. But they’re dramatic works. He’s been very thoughtful about how they are dispersed throughout the experience."

That "reinforcing of themes" is also at the heart of successful commercial collaborations.
Trademark attorney Celia Murray works with large corporations to seal "X" deals, often with smaller partners, through her licensing firm Untapped Agency. She says big corporations are excited about the buzz around collaborations, because consumers are responding so positively.

But what collaborations can’t do, she says, is to be so blatantly opportunistic that the public smells a rat. "Consumers will very quickly call you out … it can bring the brand into disrepute."

A valid collaboration has a natural synergy, Murray says – even the recent bedlinen range put out by Sheridan "X" at the Sydney Opera House came with a backstory about a Sheridan company founder also having been a founding chair of Opera Australia.

Enthusiasm for collaborations among younger consumers is high: they get what a brand signifies and like to see its qualities mixed with other brands. They’re also fashion-conscious and responsive to last-minute, short-term Instagram marketing. 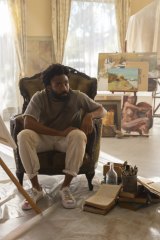 Australian National University marketing academic Toni Eagar says fashion houses, particularly sports brands, were the first to see the cross-pollinating possibilities of collaboration long before the term "X" was coined. When Adidas teamed up with hip-hoppers Run DMC in the mid-80s it was the first time celebrities other than sports stars had been used to sell sneakers: the band released a hit song, My Adidas, and Adidas sold a lot of shoes. Last month, the company announced its latest "creative partnership", this time with actor Donald Glover (aka rapper Childish Gambino), who sports a new range of "deconstructed" sneakers in a series of short films that gently mock his celebrity cred.

Eagar agrees that for the more creative partner in such collaborations, there is a risk of being seen as a sellout. The partnerships are often the result of marketers "trawling through various subcultures to discover what’s cool, what’s interesting and bringing it to the mainstream. But in that process they basically kill the cool." A good collaboration, she says is, "not just finding someone to put their face on a campaign. It’s the idea of co-creation." For the consumer, there’s the chance to wear or own a prestige brand – in the case of Supreme X Louis Vuitton, the clothes were covered in the LV logo – they could never otherwise access, an appeal known as "mass-tige" or prestige for the masses. 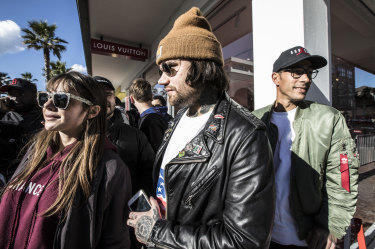 People queue to get into the Louis Vuitton x Supreme pop up store at Bondi Beach in June, 2017.Credit:Jessica Hromas

Collaborations can also be about bringing "social capital" to a brand. RMIT marketing lecturer Amanda Spry says they can improve a company’s image and performance when it comes to sustainability. Stella McCartney designed a vegan shoe for Adidas, and last year Balenciaga released a "World Food Program" range that donates proceeds to the United Nation’s hunger-busting efforts.
"There’s a real demand for brands to make social statements … but if (consumers) perceive it as being merely for profit, I think this will be an issue," says Spry.

Or, to borrow a phrase in the spirit of "X": you need to keep it real.

Lisa Gorman of Melbourne’s Gorman label says that over 10 years the brand’s collaborations have ticked all the boxes – bringing new aesthetics to the work, feeding customers’ desire for something new, bringing attention to their partners’ work, supporting charities and highlighting social issues.

"It was never planned to be an ongoing part of the business," she says, but now about half their fabrics come from collaborations and large-scale partnerships are in the works.
Collaborations, this would suggest, are more than a fad: they’re business as usual in the 21st century.