These roses are looking the best despite the rain: See for yourself

Roses love a climate where summers are warm and dry, and humidity is low: more Wagga Wagga than Wollongong. And yet, a rose garden is at the heart of the Wollongong Botanic Garden. To increase the challenge, it’s a walled garden, reducing air flow and increasing disease risk among the 500 rose plants growing in the garden.

Worse, about thirty years ago a climbing fig, Ficus pumila, was planted against the wall. “It sucks an incredible amount of moisture out of the soil; its roots spread about five metres into the rose garden,” sighs acting curator Karen Holmes. 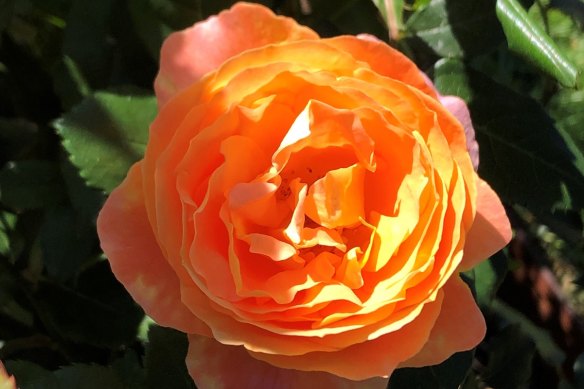 The ‘My Yellow’ rose is doing well despite the wet spring.Credit:Robin Powell

“Plus, it needs to be pruned several times a year to keep the foliage at the juvenile stage, otherwise it starts growing like a tree. Getting in behind the roses to prune it? Well, it’s not ideal.”

Finding what works best has been a matter of trial and error, with plenty of input from The Rose Society of NSW and Australian rose breeders. The Garden is keen to keep Australian-bred roses in the garden both as a showcase, and to ensure they continue.

The stand-out locally-bred performer has been ‘My Yellow’. This rose from Victorian breeder Bruce Brundrett is a floribunda (meaning it bears flowers in large clusters, rather than a single flower on a single stem), with a strong fragrance, growing to just 80cm. The blooms, which are on the golden side of yellow, don’t fade under hot sun, but instead age to an appealing peach.

This rose suffered not a speck of black spot last summer and was still covered in flowers in July, when all the roses were pruned. It’s available from Wagners Nursery.

Of the imports, ‘Bright as a Button’ and ‘Wedding Bells’ (both available from Treloar’s) have excelled despite La Nina’s tantrums. Both are low-growing roses to no more than a metre, suitable for growing in garden beds or in pots, with dark green glossy foliage and fragrant blooms. Holmes says both have good resistance to pests and disease, hold on to their foliage late, and flower for at least half the year, from mid-October to mid-April. 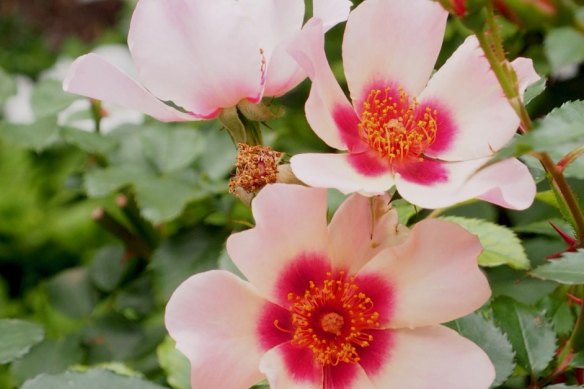 The Bright As A Button roseCredit:Robin Powell

‘Bright as a Button’ is part of an apparently sudden breeding breakthrough that was decades in the making, which has created roses that look a bit like poppies or peonies, with a dark magenta eye on a soft pink or peach single flower.

‘Wedding Bells’ is a more traditional hybrid tea, with clear pink petals etched in darker pink on the edges so that the points of the petals are accentuated.

This winter, the planting plan focused on newly bred roses with great health ratings and a tolerance for a subtropical climate. Several have come from Kordes and Sons in Germany, which has been at the forefront of developing vigorous, disease-resistant roses that do not require chemical assistance to look good. The gardeners are keen to see how they do in their first growing season: another La Nina cycle should be a good test.

The roses are at their spring peak over the next few weeks. Plan a day trip to judge the early results for yourself.