The joy of living with TWO other halves! When LINDA KELSEY’s ex-husband was forced to move back in, she feared her new partner would be jealous. But it’s made them a (bonkers) happy family

Benjamin Franklin famously said that house guests, like fish, tend to smell after three days. In the case of an ex-husband coming to stay, you might expect the putrefaction process to set in rather more quickly.

So it has come as a surprise that after an invitation to my ex to stay for a few days — which has already been extended for a fortnight due to a bike accident, and looks set to continue for two more weeks — war has not broken out yet.

It would be tricky enough if it were just the two of us in my house. But my partner of a decade, Ronny, lives with me, too. So here we are, the three of us — my former husband, Christian, Ronny, and me, under the same roof. 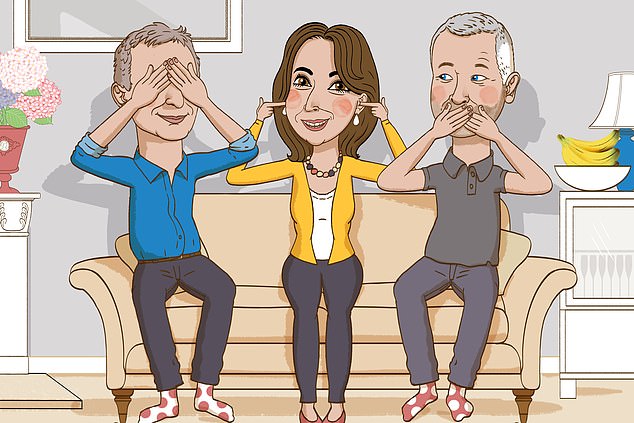 There have been awkward moments. The men have no difficulty remembering my name, while I am constantly calling Christian ‘Ronny’. And last night in bed (though not in the throes of passion you’ll be glad to hear) I called Ronny ‘Christian’, spluttering an apology as he raised an eyebrow and sniggered.

And Christian has a habit of calling me ‘Darling’ and patting me on the bottom. This has not gone unnoticed.

My friends think I am bonkers inviting my ex to stay. Those who are divorced, and still not at peace with their former spouses say they could never do it. They think Ronny should be declared a saint. I counter that we are just 60-somethings trying to navigate modern relationships.

The reason Christian is staying is a practical one. Since last autumn, after more than 40 years in London, he’s been spending more time in the town near Hamburg in Germany where he grew up. Our son Thomas, now 30, lives over here, and Christian, a businessman en route to Kenya for a work trip, came to see him.

As he no longer has a place here, it didn’t seem too big a stretch to offer him a roof for a few days so he could get together with Thomas, who doesn’t have the space in his house-share.

Yes, he could have called on friends — but, despite our split, Christian and I are good friends. Ronny, who I met a year after my marriage ended, doesn’t feel threatened by Christian and readily agreed. ‘It’s only a few days,’ I said, pleading with Ronny not to end up in bed with my ex.

This is not as unlikely as it sounds. Insomniac Ronny creeps into the spare room at night to avoid disturbing me. He’s pretty groggy at 3am. I had nightmare visions of him forgetting Christian would be there. So far, however, he has stayed put.

Meanwhile, the experiment has been nothing but interesting. If there are rivalries over my affections the men are not showing any obvious signs of it. But there has been some manly sparring.

Take, for example, the big gathering we held at Easter, which coincided with the Jewish Passover feast. Christian, a keen cook, made an amazing German hazelnut cake. Ronny, a less keen cook, suddenly found great enthusiasm for Passover dish, charoset — a sweet concoction of dates, walnuts, raisins and apples.

As I looked around the table of 24 friends and relatives, I thought a lot about acceptance. We were at a feast to celebrate a Jewish festival, and yet almost half were of other faiths, including my ex.

But if Ronny, who is Jewish, was enjoying singing Hebrew songs, so was Christian. My son, meanwhile, was explaining to his Chinese friend the Passover story. I realised this kind of inclusiveness was what I’d been working towards with Christian. 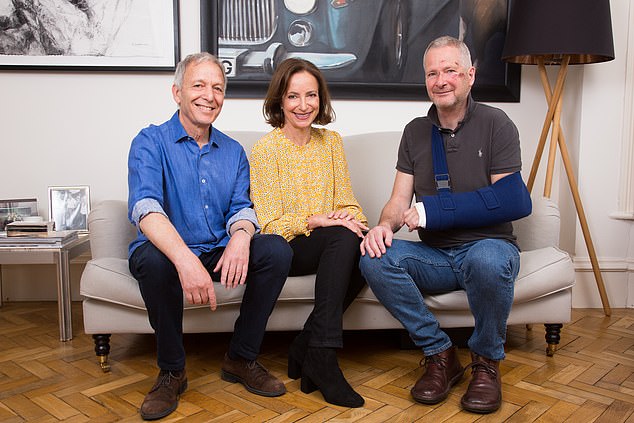 The day after Passover Christian went flying off his bike and spent the next 48 hours in and out of A&E. He has three arm fractures and a battered face. He can’t leave for Africa until he’s had the all clear. I’ve turned into a nurse and Ronny, an osteopath, is chief medical adviser. In our unusual household set-up, I am in charge of cooking and laundry. Sorting Ronny’s and Christian’s washing into piles, I muse on how different they are.

Ronny enjoys being looked after, while fiercely independent Christian once shouted at me for offering to make him a sandwich, on the basis I wasn’t his mother.

Where Ronny is ever-cautious, Christian is impulsive. But both are warm and generous-spirited.

Meanwhile, they have bonded over detailed discussions of broken bones and physio. The other night they were chatting and joking at the kitchen table, getting through a bottle of wine. However well it’s going, this situation has made me think afresh about how things went wrong in my marriage and how I feel now. 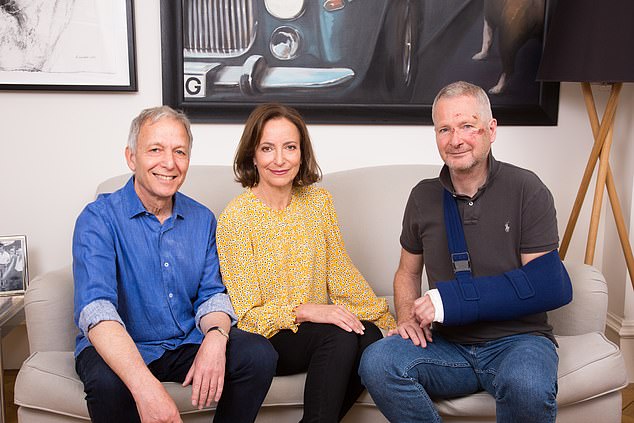 Meanwhile, the experiment has been nothing but interesting. If there are rivalries over my affections the men are not showing any obvious signs of it. But there has been some manly sparring

My 25 years with Christian were mostly spent in harmony. When I had a breakdown, and for three years was unrecognisable as the woman he’d fallen in love with, his support was unwavering. It was only later, as his business went badly, that cracks showed.

As he sought to sell the investment property that was our future pension and put it into a venture I thought risky, I couldn’t go along with it. He then decided to go off on a ‘gap year’. I became resentful. We no longer shared a vision of the future and he was having what some might term a mid-life crisis.

At least he didn’t run away with another woman — that’s why I can be friends again with him, or so say friends whose husbands left them for someone else.

But in some ways I think I might have better understood being left for someone else, rather than an indulgent journey of ‘self-discovery’. Since our split, Christian has had relationships, but so far none have lasted the distance. 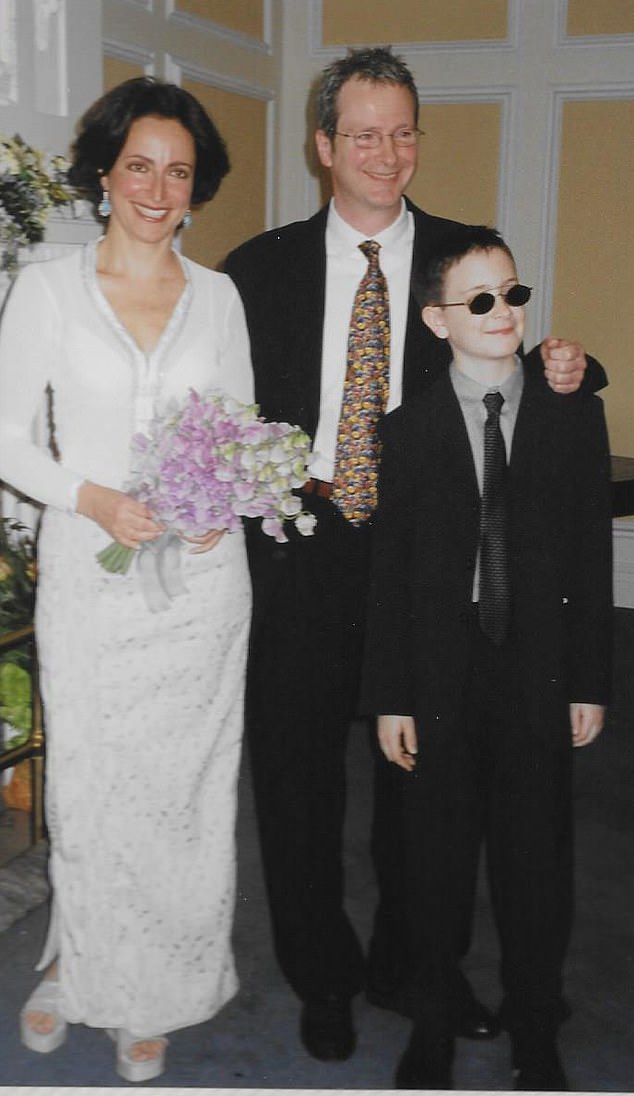 Although angry and very, very sad at the time, I realise now my love for him never vanished. And we were never disunited in wanting to do the best for our son.

It’s 11 years now since we separated, time enough to realise that to not recognise the joyful parts of our relationship would be a negation of a third of my life.

And the result of that would be looking back with huge regret when so much of it was positive.

These past few weeks have really brought that home. Christian puts it this way: ‘If you have been in love with someone and that person was your best friend, you can’t possibly not love and respect that person for the rest of your life; admittedly with minor adjustments on both sides.’ 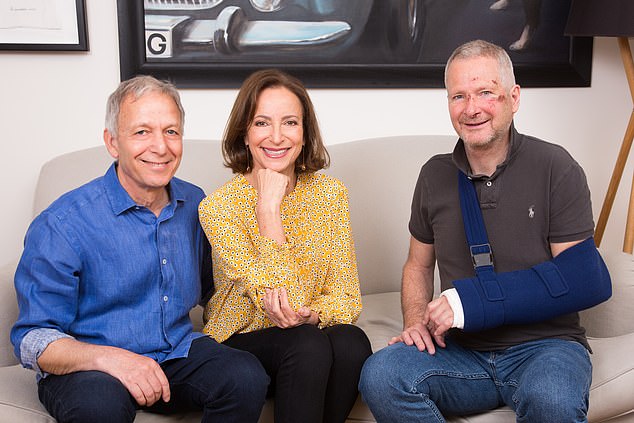 Is it possible to love two men at once? I think it is. One is my partner. The other is my family, the one with whom I shared so much of my life, in a relationship which created our beloved son. Could I carry on indefinitely with these two men living with me under the same roof? Call me barmy, call me greedy, but actually, yes

I’d go further. I’d say it’s best just to ignore the difficult areas. So I make no outward judgments about anything he does.

As for Ronny, even though he has a less easy relationship with his ex-wife — and would never consider her living with us — he respects the way Christian and I get on. And he likes the man.

While Ronny is at work, Christian and I chat intermittently as we work at our computers. It takes me back to the last two years of our marriage, when we would work in hostile silence. It makes me mournful that we let ourselves drift apart.

Is it possible to love two men at once? I think it is. One is my partner. The other is my family, the one with whom I shared so much of my life, in a relationship which created our beloved son. Could I carry on indefinitely with these two men living with me under the same roof? Call me barmy, call me greedy, but actually, yes.

I asked Ronny how long he could put up with the situation. ‘I can’t tolerate endless,’ he said. ‘Maybe a couple of months. But I might miss him when he’s gone.’ Me, too.