A federal Coalition MP who stood down at the last election after losing a preselection battle is among the government’s latest appointments to the Administrative Appeals Tribunal.

Attorney-General Christian Porter on Friday appointed Jane Prentice, whose background before politics was in tourism and events, as a full-time member to the body that reviews decisions made by government ministers, departments and agencies. 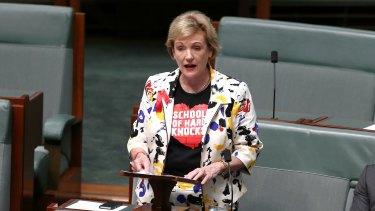 Jane Prentice, the former member for Ryan, has now been appointed to the Administrative Appeals Tribunal.Credit:Alex Ellinghausen

Ms Prentice, who was the Liberal National Party member for Ryan in Queensland but lost preselection for the seat to Julian Simmonds, used her farewell speech to Parliament to slam “treachery and lies” and people who pursued political power to fulfil personal ambitions.

Former Andrews government minister Philip Dalidakis, who quit the Victorian Parliament in mid-2019 to join the Australia Post executive only to leave seven months later, also joins the AAT as a part-time member.

Mr Porter has come under fire from the opposition and advocates for a federal integrity watchdog for using AAT appointments as a way to give former Coalition politicians and officials jobs.

A review of the tribunal by former High Court justice Ian Callinan, released in July 2019, recommended all appointments or reappointments to the tribunal should be lawyers qualified enough to be admitted to a state Supreme Court or the High Court, and "on the basis of merit". The government is yet to respond to the review.

Mr Porter said on Friday “all of the appointees are highly qualified to undertake the important task of conducting merits review of government decisions”.

The other three full-time members he appointed, Rachel Da Costa, Namoi Dougall and Justin Gibbs are or have been lawyers.

John Rau, a former South Australian Labor deputy premier and attorney-general, was appointed as a part-time senior member. He is a barrister.

Ms Meagher has a legal background. Ms Synon is a Howard-era senator who has also served on the Refugee Review Tribunal and Migration Review Tribunal.