Prime Minister Anthony Albanese is being urged to visit Kyiv after he attends the NATO summit in Spain next week to join world leaders who have stepped up their support for Ukraine in recent days with pledges of civil and military aid as well as visits to the capital.

Albanese is considering the invitation from Ukrainian President Volodymyr Zelensky while government officials consider the security risks of the journey as Russian forces bombard parts of eastern Ukraine with missiles and heavy artillery. 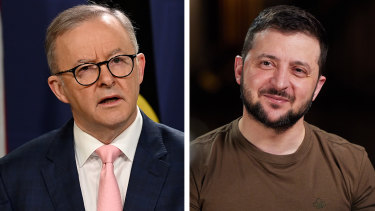 Ukraine’s ambassador to Australia, Vasyl Myroshnychenko, said the visit could not only show moral support for the people of his country but also discuss practical help to add to the military supplies the Royal Australian Air Force has flown to Poland in recent months for transfer to Ukraine.

“I was assured by President Zelensky that he would be delighted to host Prime Minster Anthony Albanese and it would mean a great deal for Ukraine,” he told The Sydney Morning Herald and The Age.

“If you see all the leaders visiting Ukraine now, we need to increase the pipeline of those to come to demonstrate solidary, demonstrate support.

“In the case of Australia it is not just about moral support but actually material support – the lethal aid and other assistance which is coming,” he said.

“For Australia it is a vital investment. You have a tradition of standing up to coercion and bullying behaviour in the world so it is important to step up for Ukraine and provide more assistance.

Australian National University emeritus professor Paul Dibb, an expert on Russia, said there was a good case for the visit to Ukraine.

“I think that Albanese should visit Kyiv but he should beware succumbing to Zelensky’s blandishments and demands,” he said.

“This new government of ours, which is doing rather well on what it says about foreign and defence policy so far, needs to remember that our immediate region needs to be their absolute priority.”

Dibb said the focus on the region should be the “iron cast” factor in shaping the Force Structure Review being planned by the Department of Defence to consider the country’s military capacity.

Indonesian President Joko Widodo will visit Ukraine and Russia next week after attending a G7 summit in Germany that concludes on Tuesday, with the TASS news service in Russia saying he was due to be in Moscow on Thursday.

The NATO summit begins in Madrid on Wednesday to consider a transformation of its military operations, especially on its eastern flank, with leaders attending from all key members of the North Atlantic alliance including United States President Joe Biden.

In a rare expansion of the talks outside the formal session of NATO allies, the group will be joined by Albanese as well as New Zealand Prime Minister Jacinda Ardern, Japanese Prime Minister Fumio Kishida and South Korean President Yoon Suk Yeol.

One issue on the agenda is the security pact signed by Russia and China in the weeks before the invasion, raising implications for the Indo-Pacific region.

British Prime Minister Boris Johnson arrived in Kyiv last Friday with an offer to Zelensky to provide military training for 10,000 soldiers and an assurance that the United Kingdom would provide the “strategic endurance” the Ukrainian people needed.

French President Emmanuel Macron, German Chancellor Olaf Scholz and Italian Prime Minister Mario Draghi were in Kyiv the previous day and visited villages near the capital where officials are pursuing war crimes investigations over the massacre of civilians.

Australian Strategic Policy Institute executive director Justin Bassi said it was vital for Australia to make it clear that it backed Australia against the breach of sovereignty by an authoritarian regime.

“The prime minister going to both the NATO summit and Ukraine would show that Australia is joining democratic nations in a collective show of force to stand up against authoritarian regimes,” he said.

“Security in Europe is now relevant for security in the Indo-Pacific.”

Lowy Institute executive director Michael Fullilove said Australia had a “huge stake” in the outcome of the war because it was a test of the international order.

“The invasion of Ukraine has been the greatest disruption of the international order since the Second World War and that has implications for us because we’ve enjoyed the benefits of that international order,” he said at the National Press Club on Wednesday.

“A Russian victory would make invasions like this more common. It would be big win for countries that challenge the international order. So I think we have a big stake in it and I would encourage Prime Minister Albanese to visit,” he said.