Unemployment falls to shock low of 3.5 per cent

The nation’s unemployment rate has tumbled to a new near 50-year low of 3.5 per cent, increasing pressure on the Reserve Bank to deliver a super-sized lift in the official interest rate at its next meeting.

The Australian Bureau of Statistics on Thursday reported the national jobless rate tumbled by 0.4 percentage points in June. At 3.5 per cent, unemployment is at its lowest since August 1974 when it was 2.7 per cent. 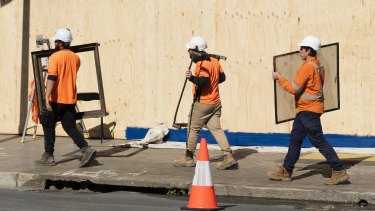 The unemployment rate has dropped to a new near-50-year low.Credit:Rhett Wyman

The figure is much lower than had been expected by financial markets that had been tipping a slight fall to 3.8 per cent.

The bureau said 88,400 jobs were created during the month with 52,900 people taking up full-time employment while 35,300 gained part-time work.

The number of people formally unemployed fell by 54,300. There are now 493,000 people officially unemployed, the lowest number since October 2008.

The jobless rate is 1.7 percentage points lower than in March 2020, ahead of the pandemic recession.

A boost in youth employment, which rose by 23,000, helped drive the unemployment rate down. The rise among 15 to 24-year-olds accounted for more than a quarter of the total increase in employment.

The head of labour statistics at the bureau, Bjorn Jarvis, said two factors were at play in the result.

“The large fall in the unemployment rate this month reflects more people than usual entering employment and also lower than usual numbers of employed people becoming unemployed,” he said.

“Together these flows reflect an increasingly tight labour market, with high demand for engaging and retaining workers, as well as ongoing labour shortages.”

The result puts added pressure on the Reserve Bank which was expected to lift official interest rates at its August meeting by half a percentage point to 1.85 per cent.

Overnight, Canada’s central bank lifted rates there by a full percentage point to 2.5 per cent. The central banks of New Zealand (2.5 per cent) and South Korea (2.25 per cent) this week also lifted their central borrowing rates sharply in the face of high inflation and tight jobs markets.

Capital Economics senior economist Marcel Thieliant said the jobless rate could soon fall to 3 per cent. He said the figures would also force the Reserve Bank to move more aggressively.

“The sharp fall in the unemployment rate in June is consistent with our view that the Reserve Bank of Australia will need to tighten monetary policy more aggressively than most anticipate,” he said.

The underutilisation rate – the combined number of people who were jobless or underemployed – remained at 9.6 per cent, and is 4.6 percentage points lower than at the start of the pandemic.