Union negotiated wage agreements will be among options a Labor government would consider to implement its $9.9 billion pay rise for up to 100,000 childcare workers.

Labor's employment spokesman Brendan O'Connor said "enterprise agreements, of course, would be one of the vehicles we would examine to determine that matter", when asked whether the pay increase could be implemented through enterprise bargaining. 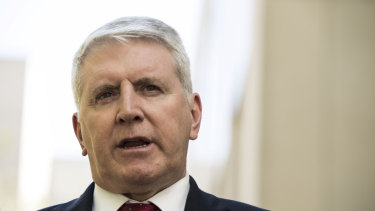 "We think that is certainly an option. But we will listen to the parties to work our way through that," he said.

"We will sit down with unions and employers to talk about how we lift wages for some of the most discriminated workers in the country."

Mr O'Connor said Labor would not allow "one cent" of the increase for low-paid childcare workers to go to private operators and would deploy the Australian Competition and Consumer Commission if required. It would also look at caps on fees if providers seek to take money earmarked for their workforce.

"I believe that providers will welcome it because they will get to attract and retain staff," he said.

"We also want to ensure no money goes to parents – that's why we provided a very significant subsidy for up to $2100 per child for families struggling with cost of living pressure."

The policy is part of Labor's plan to introduce universal preschool education for three-year-olds following the example of "the best economies in the world" which provide 14 years of pre-tertiary education.

United Voice, the union representing childcare educators, said they are among the lowest-paid workers in Australia, on wages of $22.04 per hour. The union declined to comment on proposals for how Labor's plan to provide a 20 per cent pay rise for the sector would be implemented.

"Stakeholders across the sector, including United Voice, will be involved in that process and all those involved will find out more about potential mechanisms – until that process starts we don't have anything to add," a union spokeswoman said.

Employment law expert, Professor Andrew Stewart from the University of Adelaide, said it appeared childcare centres would have a number of options for delivering a pay increase to workers including through an enterprise agreement.

"It is not an option that will be considered as the only way, it's an option they are considering as one way the pay rises can be delivered," he said.

Professor Stewart said the implementation of the policy would be complex. Childcare staff are covered by a mixture of enterprise agreements with schedules of pay increases locked in. Others are covered by awards that increase yearly, while others have their wages set by employment contracts.

Professor Stewart said the childcare policy was in contrast with a controversial 2012 policy in which an enterprise bargaining agreement was the single way for aged care workers to get a government-funded pay rise.

In 2013, the Gillard government established a $300 million Early Years Quality Fund to deliver pay rises to 30 per cent of childcare workers. The Australian National Audit Office found problems in the implementation of the demand-drive grants program which reached its funding cap within the first 13 hours.