Parcel deliveries nationwide could be crippled for a day by an industry-wide strike, with threats of more stoppages in the leadup to Christmas if transport companies refuse a union demand to improve pay and job security protections in workers’ collective wage deals.

The 64,000-member Transport Workers Union has promised a 24-hour simultaneous strike at five major transport companies, which move everything from parcels to groceries and alcohol across the country, if they do not make concessions by the end of next week. 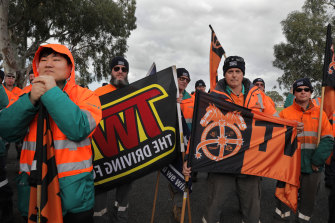 The union has previously organised a series of strikes at individual companies but not across the industry at once.Credit:Philip Gostelow

Pay and conditions differ across the industry but the crux of the dispute is the union wants firms to restrict the use of workers from outside labour-hire firms, who are often paid less than unionised direct employees.

It argues the use of those workers has been increasing as the five companies seek to compete with giants such as Amazon that use an Uber-like system of contractors to deliver parcels without classifying them as employers at all.

Supply chains are already under strain from manufacturing and shipping problems abroad caused by the pandemic and pauses in parcel collections from retailers instigated by Australia Post to get on top of huge package volumes and increased online shopping.

So far the TWU has held or planned strikes a day at a time at FedEx, StarTrack, which is owned by Australia Post, Toll, Linfox and its drinks business BevChain, but the union has not got its way. 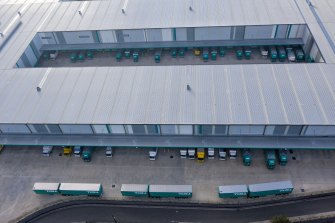 A previous TWU strike in August idled dozens of Toll trucks and trailers in Sydney for a day.Credit:Nick Moir

“Several thousand workers have vowed to unite and take national action if that is what it takes to bring this attack on their jobs to an end as quickly as possible,” the union’s national secretary Michael Kaine said.

“Christmas is fast approaching, and this has gone on long enough. Workers have acted responsibly throughout negotiations, it’s time for transport operators to bring a reasonable solution to the table and provide the guarantees workers need so that national strikes will not be necessary.”

The employers reject the union’s claims, with many saying they already have job security protections including guarantees to pay some labour-hire workers the same as their direct staff and high pay rates for the industry.

“Our people enjoy some of the best pay, conditions and job security in the industry,” a Toll spokeswoman said. “We pay well and treat our workers well because that’s how we differentiate ourselves against our competitors.”

In previous strikes some union members have chosen to go to work but there are still concerns from the firms that a day of coordinated action could disrupt deliveries.

“Any further industrial action will cause delays and delivery impacts, at a time when the delivery of essential items has never been more important,” a StarTrack spokesman said.

National Retailers Association chief executive Dominique Lamb said it was too early to tell if the stoppages would cause shortages, noting many stores have stock they had been unable to access during lockdowns, but they could stop people from getting packages ordered online in time for a Christmas that is vital to the industry’s finances.

“The TWU needs to abandon its short-sighted campaign and work with the rest of the community to get behind the recovery from the pandemic,” Mr Willox said.

Maritime Union of Australia members are also taking a suite of industrial actions at the country’s ports.