‘Unparalleled’: A million species at risk as humanity’s impact rises

About 1 million species around the world face extinction because of humans, with the pace of destruction as much as 100 times faster than the natural rate over the past 10 million years, according to a global report prepared by 150 experts.

The 2019 report for the Intergovernmental Science-policy Platform on Biodiversity and Ecosystem Services (IPBES) – dubbed the "Paris Agreement for nature" – drew on 15,000 references and government data in its first update since 2005.

"Biodiversity – the diversity within species, between species and of ecosystems – is declining faster than at any time in human history," the report's summary for policymakers, released in Paris on Monday, said.

Changes in land and sea use by humans were the largest drivers as nature was being "altered at an unparalleled degree" with about one in eight animal and plant species facing oblivion "many within decades, unless action is taken to reduce the intensity" of those impacts.

Climate change was already emerging as a threat exacerbating other impacts, with less than 1 per cent of the former cover of coral reefs expected to survive even if the Paris climate target of limiting global warming to 2 degrees above pre-industrial levels was achieved, it said.

The full report – expected to exceed 1800 pages – will detail many of the rising pressures on our planet, including a doubling of humanity's population in the past 50 years to 7.6 billion and a doubling of urban areas in the past quarter century. 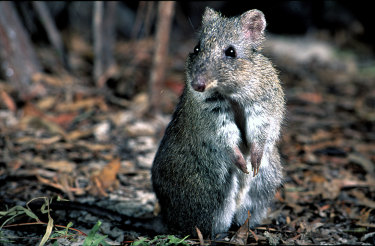 The Gilbert’s potoroo is among nine mammals deemed by the federal government to be critically endangered, while two other potoroos are on the endangered list. The broad-faced potoroo, though, is one of 27 mammals in Australia deemed to have become extinct since the arrival of Europeans.Credit:WA Department of Parks and Wildlife

While the pace of forest loss had halved since the 1990s, the felling of species-rich tropical forests continues.

Just a seventh of the world's wetlands in 1700 remained by 2000 and the rate of their destruction has also quickened since then.

"The global assessment is clear – there are limits to the destructive human activity nature can withstand," Basha Stasak, nature program manager at the Australian Conservation Foundation, said. "We are not just pushing those limits, we are breaking them at unprecedented rates." 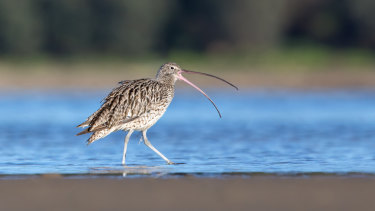 The eastern curlew (pictured), along with the curlew sandpiper, are among 17 critically endangered bird species listed by the federal government. Credit:Duade Paton

Ms Stasak said expanded land clearing in Australia meant more than 7.4 million hectares of threatened species habitat, or an area larger than Tasmania, had been lost since 2000.

The Coalition government had also slashed the national environment budget by 38 per cent, or $533 million, since taking office in 2013.

The IPBES report noted that nature played a "critical role" is sustaining humans with food, energy, medicine and other materials.

More than 75 per cent of food crops, for instance, rely on animal pollination, it said. Marine and land ecosystems were the sole sinks for manmade carbon dioxide emission, absorbing 60 per cent or some 5.6 billion tonnes of carbon a year – preventing faster atmospheric warming. 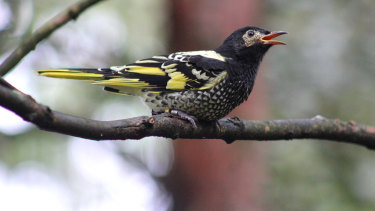 The regent honeyeater is among 17 bird species deemed by the federal government to be critically endangered in Australia.Credit:Paul Fahy

As a guide to how species are faring in human-modified ecosytems, those that are "large, grow slowly, are habitat specialists or are carnivores – such as great apes, tropical hardwood trees, sharks and big cats – are disappearing from many areas", it said.

"Many other species, including those with opposite characteristics, are becoming more abundant locally and are spreading quickly around the world."

To reduce humanity's impact, incentives that favour expanding the economy over conservation or restorations should be rolled back.

"A key constituent of sustainable pathways is the evolution of global financial and economic systems to build a global sustainable economy, steering away from the current limited paradigm of economic growth," it said.

The assessment is expected to lay the basis for an update on the global 2020 Aichi Targets for protecting nature when nations meet in China's Kunming city next year to negotiate the new goals.

Tim Beshara, a spokesman for The Wilderness Society, said the report was "a brutally clear statement that the world's life support systems are faltering".

"Climate change has supercharged the impact of traditional environmental pressures and our ecosystems are showing the signs of collapse," he said.

In Australia's case, the natural legacy "is unprecedented – Gondwanan rainforests, ancient lineages of marsupials and birds found nowhere else – yet our response in trying to protect and manage our legacy is woeful," Mr Beshara said. "Nowhere else on the globe has had 27 consecutive years of economic growth and few places on the planet have seen such consistent environmental decline."

Nick Boyle. director of conservation and wildlife at Sydney's Taronga Zoo, said zoos were critical to protect biodiversity and "provide a vital conservation lifeline for some of the world’s most endangered species".

"Through Taronga’s breed and release programs and the rehabilitation of animals at our wildlife hospitals, we have released more than 50,000 animals back into the wild, some of which are critically endangered such as the Corroboree Frog and Regent Honeyeater," Mr Boyle said.

"Everyone has a part to play in wildlife and environmental conservation, and every day we can all make choices that make a world of difference to wildlife," he said. "Our community conservation programs give everyone practical ways in which they can make a difference through every day choices, including choosing sustainable palm oil and seafood, and by choosing to reduce, reuse and recycle our way to a smaller footprint."