Vaccines, autonomous vehicles and robots: Morrison to unveil list of critical technologies to be protected

More than 60 rapidly developing technologies, including vaccines, autonomous vehicles, artificial intelligence and quantum technologies, could be blocked from being shared with Chinese universities and firms as the federal government looks to stop Beijing from gaining dominance across a range of emerging sectors.

Australia’s first critical technology list will drive investment from the federal government, private sector and like-minded countries, with an initial $100 million towards the development of quantum technologies. 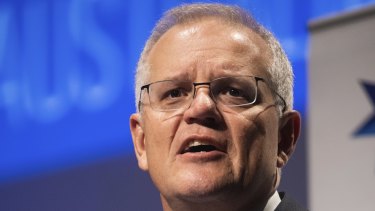 Scott Morrison will say the new blueprint “aims to balance the economic opportunities of critical technologies with their national security risks”.Credit:Paul Jeffers

The list, to be unveiled by Prime Minister Scott Morrison on Wednesday, could be used to stop Beijing from collaborating with Australian universities on certain types of research, as well as to block exports and foreign investment.

Mr Morrison will also reveal that Australian officials will report back within a month on how to develop new capabilities in artificial intelligence, quantum technologies and undersea drones under the new AUKUS defence pact with the United States and Britain.

There has been growing concern that China is gaining a lead in critical technologies such as artificial intelligence and quantum, which could have widespread military uses including facial recognition and surveillance.

The Australian government has also been on alert for talent-recruitment initiatives such as Beijing’s Thousand Talents Plan that could be facilitating espionage and theft of intellectual property.

In a speech to the inaugural Sydney Dialogue, Mr Morrison will say the new blueprint “aims to balance the economic opportunities of critical technologies with their national security risks”.

“The simple fact is that nations at the leading edge of technology have greater economic, political and military power,” he will say, according to a draft of the speech.

“And, in turn, greater capacity to influence the norms and values that will shape technological development in the years to come.”

The list of 63 critical technologies also includes advanced explosives, next-generation networks such as 5G and 6G, cybersecurity technologies, genomics and low-emission fuels such as biofuels and hydrogen. It goes far beyond the military or “dual-use” technologies that Australian universities and businesses have traditionally been told to protect from foreign governments.

While the new list does not come with additional regulations, it will be used to inform the government’s rules for university collaborations, critical technologies, defence export controls and security of critical infrastructure.

Mr Morrison will raise the alarm about the use of emerging technologies by authoritarian states, saying Australia wants technology to protect its citizens’ autonomy, privacy and data but “not all governments see technology the same way”.

“In this era of technological transformation and strategic competition, there are great challenges before us all,” he will say. “Our goals are clear: to uphold our liberal democratic traditions, to keep Australia prosperous and to keep it strong and safe.”

Mr Morrison will highlight the potential of quantum technologies – based on the science of quantum mechanics – which could make computers, encryption, cryptography and sensors exponentially more powerful.

He will announce a $100 million investment in quantum, including $70 million for a commercialisation hub to foster strategic partnerships with like-minded countries to commercialise Australia’s quantum research and help Australian businesses access new markets and investors.

“Quantum technologies will also have defence applications, like enabling navigation in GPS denied environments and helping to protect us from advanced cyber attacks,” Mr Morrison will say.

The government has tasked Australia’s Chief Scientist, Cathy Foley, to lead the development of the nation’s first-ever national quantum strategy.

It is estimated the development, commercialisation and adoption of quantum technologies could deliver Australia $4 billion in economic value and create 16,000 new jobs by 2040.

Mr Morrison will also attempt to shift the focus of the AUKUS defence pact away from nuclear-powered submarines, which may not become operational until the 2040s.

Officials will next month provide the government with a classified plan on how to deliver the non-submarine elements of AUKUS, including offensive cyber capabilities, quantum, artificial intelligence and unmanned, undersea vessels, as quickly as possible.

“To state the obvious, AUKUS is about much more than nuclear submarines,” Mr Morrison will say.

“AUKUS is a broad and adaptable partnership that will drive our technology and capability co-operation to meet the challenges of the 21st century in our region, the Indo-Pacific region.”

In a separate speech, Labor’s cybersecurity spokesman, Tim Watts, will warn that the world is facing a technological contest between “democrats and a new breed of autocrats – leaders and citizens alike – whose individual decisions are shaping the way societies around the world operate”.

“The contest between democratic and authoritarian values is now utterly pervasive in the technology sector.

“Where globally integrated technology supply chains and transnational social media platforms once brought people and organisations from around the world together, today these sites of cross-border interaction are the front lines of a contest of values marked by decoupling and Balkanisation.”

Fascinating answers to perplexing questions delivered to your inbox every week. Sign up to get our new Explainer newsletter here.