Vigil finale: Once you come up for air, did it really hold water?

Now Vigil is over, we can finally come up for air and take a deep breath. Phew, that was intense.

The finale, which aired on Monday night, was deeply satisfying in the sense that it wrapped everything up neatly, including giving us the happy ending DCI Amy Silva (Suranne Jones) and DS Kirsten Longacre (Rose Leslie) – a couple dubbed Silvacre by some fans – clearly deserved. But once you’d got your landlegs again it might have struck you as also being a bit pat and predictable, and a lot far-fetched. 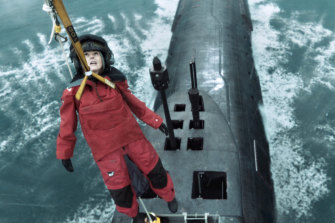 The genius of Vigil lay in its setting. A murder investigation in a closed community always ups the ante – think Witness or Knives Out or pretty much any Agatha Christie whodunnit ever. Make that community a submarine crew, bound by ties of comradeship, secrecy and a heightened sense of risk and responsibility, and you can dial it up to 11.

The tension was relentless. While the land-based elements of the story provided their own excitement, Amy’s isolation underwater ratcheted it up enormously. Add to the fact that almost everyone on board had a reason to despise her at some point, and possibly to want her dead, and it was almost unbearable at times.

But surfacing from all that claustrophobic tension risks a case of the televisual bends. 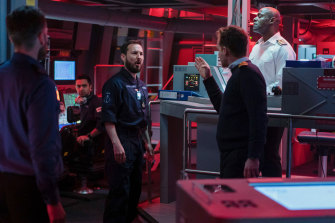 Things get tense – and stay that way – below the surface of the submarine murder mystery.Credit:BBC

Suddenly you can see how many circumstances had to align to make it all work – and the most glaring example is Amy herself.

What are the odds of a cop narrowly escaping drowning in a car accident that kills her partner? Pretty slim. What are the odds of that officer then being assigned to investigate a mysterious death on board a submarine, where her PTSD might have full reign? Unless her superiors were asleep at the wheel, close to zero.

What odds that her girlfriend would have taught her Morse code by tapping out sweet nothings on her back, enabling Amy to signal for help from inside the torpedo tube where she’d been stuffed by the villain? What odds that Executive Officer Mark Prentice (Adam James) – a man she had not so long ago accused of murder, and whose career she has absolutely shredded – would happen to hear her tapping when so many others who had been in the room had not, that he would open the tube just as she was drawing her last breath, and that he would then sacrifice his own life to save hers when the villain re-emerged?

Just like Chief Petty Officer Elliot Glover (Shaun Evans) finally clocking that everything was designed to bring the boat to the surface, you can start to see a pattern here, right?

Speaking of that motivation, everything is built around the idea that the ship’s captain, Commander Neil Newsome (Paterson Joseph), would do absolutely everything in his power – including letting crew members die and possibly allowing the sub itself to sink to the bottom of the ocean, taking all aboard with her – to avoid surfacing, lest it give the boat’s position away to the Russians.

And yet, in episode two, THE BOAT DOES PRECISELY THAT!

After the near-meltdown of the nuclear reactor, the boat is running on batteries, but those batteries are old and will only last three hours. After that, Glover explains to Amy, “we’d use the backup diesels. Which means going to the surface and sticking up a periscope.”

Cut to the captain: “I don’t want us anywhere near the surface, not if there’s a chance we’re being shadowed.”

But the next thing you know the sub is at periscope depth, just below the surface, where it almost collides with a tanker.

A few minutes after narrowly escaping that disaster, the captain is told they’ll need to use the diesel motors because the reactor is still shot.

“No, I’m sorry,” he says. “Sitting on the surface to double-check things is not an option if we’re being trailed by an enemy submarine.”

And let’s not even start on the villain. Towards the end of episode five, Amy and Glover finally crack the code. “What if it was Jackie [the cook]’s job to kill Burke, so they could fly a replacement out?” she muses. “Doward,” says Glover of the replacement sonar operator who came on board with Amy.

Seriously, how did it take so long? Fifteen seconds after he landed poop and fan started mingling. First the reactor meltdown, then the near-miss – prompting the captain to bellow at Doward (Lorne MacFadyen), who was on sonar duties, “How can you not hear a tanker?” – then the communications cable fouls, then the bilge pump starts leaking. Other than the near collision, who’s been absent from deck each time? Doward.

If this lot are meant to be the ever-alert first line of defence, with their fingers on the nuclear button, we should all be very afraid indeed.

And what was it all for in the end? A selfie for the Russian navy, it seems, designed to show what a basket case Britain’s nuclear subs are.

At least we should thank our lucky stars we’re not on board that particular boat, I suppose. Oh, wait…